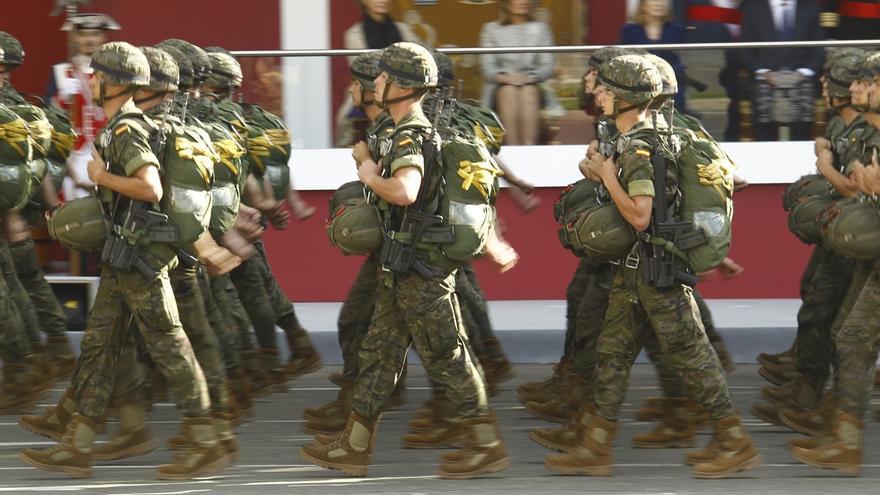 Military Justice has confirmed the six-month job suspension of a lieutenant colonel for carrying out "acts" that "imply [tanto] sexual harassment" as "professional" towards a subordinate of his unit. The Central Military Court considers proven the facts that led to the initiation of a disciplinary file for committing a very serious offense, according to the sentence that elDiario.es has accessed.

Highlights include conversations from WhatsApp and they report "a series of actions" that "attacked" the "intimacy and dignity" of the complainant, such as disrespect or attempts to control the military outside of her working hours. The sanctioned person, a lieutenant colonel who held the position of head of unit at the Parga (Lugo) maneuvering and shooting range, came into contact with a Civil Guard agent and the director of the school of the complainant's children to get information about it.

The facts related in the sentence start with a conversation on WhatsApp. At one in the afternoon of May 5, 2017, the complainant received the following message from a contact identified by the soldier as "her superior" and with a profile photograph "of a person who appears to be the lieutenant colonel": "Tgdt ' (an acronym that is used in social networks to say, 'I want you')". Seven hours later, she received another: "Forgive me." "Xk?", replied the complainant. "Don't you know what the acronyms mean?', and when the soldier replied 'Ah, what did he send me at noon?', the lieutenant colonel replied with an affirmation ("yes") to what the soldier wrote to him : 'Not really, I thought he had slipped in,' his superior responded with 'Hahahaha no'. 'Conscientiously', the soldier insisting that she thought she had made a mistake when sending the message", according to the verbatim sentence issued on September 28 by the military court and appealed to the Supreme Court for the defense of the sanctioned soldier.

In the court brief, the military court goes on to state that "in that relationship of excessive affection" between the lieutenant colonel and his subordinate, "physical contact occurred when they were alone, grabbing his arm, touching his hair, the neck, or the back of the arm, the soldier revealing her discomfort with said physical approach", collect the proven facts of the ruling, in which the military robes also detail that the superior "made statements about" the "physique" of his subordinate. The court gives some more examples, such as "comments about her having to recover a few kilos" because "they looked good on her" or about "her weakness towards 'blondes'", taking into account that "the soldier was dyed blonde ".

At the end of 2018, the "non-professional relationship ceased" and, from that moment on, the head of the unit "began to carry out a series of actions" towards the soldier that "attacked her privacy and dignity, and had so much influence on her life privately and professionally, affecting their conduct and behavior".

Until that moment, the sanctioned person had professionally supported the complainant. In 2017 he placed her "in front" of a section. In addition, to "facilitate" her "personal situation" she had granted her a "reconciliation measure", "which she had not applied until that moment to the rest of the unit's personnel". That decision was that the soldier could join her job "around 09:30 am, after she left her children on the bus to go to school." The lieutenant colonel also intervened when the defendant told him that "she felt harassed by a brigade of the Judicial Police of the Civil Guard of Lugo, who was the brother-in-law of her former partner." At that time, the sanctioned "spoke personally with the head of the Civil Guard Command to see what could be done to avoid this situation."

"The change in attitude of the superior led to personal attacks and work problems for the complainant. After being transferred to a medical center for suffering a drop in sugar" and "fainting", the lieutenant colonel went to the soldier's house and – in front of "people outside the military institution" – "he told her that she was crazy, that what she had was an eating disorder that did not let her see reality, and that she had invented the low blood sugar thing". Subsequently, the lieutenant colonel also chose to put an end to the conciliation measures that he had granted to his subordinate.

The military court also relates an episode in which the head of the unit tried to obtain information about her, taking into account that a Civil Guard patrol came "frequently" to the complainant's house. The work of the Armed Institute was part of "monitoring" actions that they maintained because this woman had sued her ex-partner "for mistreatment" in 2017. In this context, the sanctioned man called a Civil Guard commander and told him that "as the soldier's boss he had to be aware of everything that could affect him, demanding that he be informed every time they went to his house because it was your soldier." An action that the agent considered "excessive" and that he informed the complainant.

The control that the lieutenant colonel wanted to make of the complainant's movements outside of his working hours continued. The last event reported by the sentence occurred in May 2019. It all occurred as a result of an incident on a school excursion when "a girl was found unwell while passing" in front of "the soldier's house". The complainant offered them help and the director did not consider it necessary. Despite the complainant's offer, the lieutenant colonel and a brigade – "both dressed in uniform" – showed up at the school and the sanctioned person asked the director to tell him what had happened on that extracurricular outing.

To the teacher's surprise, the soldier insisted on his request: "The purpose of his visit was to gather information on the behavior of a female soldier under his command, the mother of two students enrolled in that CEIP [Colegio de Educación Infantil y Primaria]in relation to an alleged failure to provide assistance at the height of her private home, to a student who had had difficulty finishing the route". Despite the lack of response from the person in charge of the center, who showed "his annoyance " As requested, the soldier continued: "The lieutenant colonel told the director that 'he is my soldier,' 'we soldiers are soldiers twenty-four hours a day.'

After these events, the soldier "requested a regulatory channel to speak" with a colonel. The defendant found out about this request and called her subordinate together, without her "telling the lieutenant colonel the reasons why he wanted to speak" with one of his superiors. Finally, in June 2019, she was "examined" by a military psychological cabinet, "in application of the protocol against harassment." In that interview, the complainant stated "that since 2017, and due to perceived sexual harassment, she suffered from insomnia, intermittent and unrefreshing sleep, -always according to the judgment consulted- that she felt tired, that thoughts of possible retaliation against her or your partner, especially if it could have a negative impact on your permanence as a professional soldier".

Given the facts exposed by the soldier, the military psychologist "recommended taking labor measures that entailed a distance" with the sanctioned. Likewise, he pointed out that between the lieutenant colonel and the soldier "there had been a special relationship of cordiality", in which "very likely the awareness of their corresponding roles would have been involved in a thick confusion".

However, that same month the soldier "presented before her superiors [una] complaint for professional harassment" –against the lieutenant colonel–, "or as a consequence, of a previous sexual harassment". The internal file concluded with the imposition of a very serious offense contemplated in the epigraph of the Organic Law on the Disciplinary Regime of the Armed Forces that sanctions those acts that "involve both sexual and gender-based and professional harassment".

According to the ruling of the Central Military Court, the sanctioned "denies the alleged facts." In addition, he assures that the soldier lost her trust by "attributing merits that she did not deserve and taking days off without her authorization." Her lawyer, the lawyer Eva María Añón, assures that her client "was left without a destination two or three months after the internal procedure began." For its part, from the Ministry of Defense they do not provide information on the matter as it is part of "an ongoing judicial process."

The Supreme Court will have to rule on the sanction confirmed in March 2020 by the Minister of Defense. The Military Chamber has admitted Añón's appeal, in which he defends that the "sentencing court makes a construction of the facts and a justification that is incomplete, illogical and arbitrary or absurd in the conclusions." And where he also maintains that the "tgdt" message received by the soldier was "erroneous" due to the "bad habit" of the lieutenant colonel "of using the mobile while he was driving."