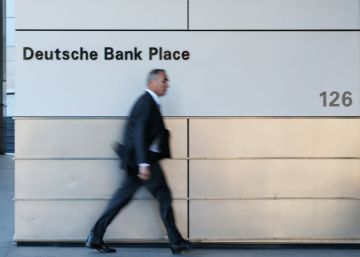 After being called by Human Resources to receive an envelope with the logo of Deutsche Bank, many of the employees of the German bank left their desks for the last time, only hours after the entity will announce a restructuring that will affect 18,000 employees, almost a fifth of the 91,500 people it employs.

Deutsche Bank announced on Sunday that it closed a large part of its business of intermediation and investment banking, so executives of the division of shares in Sydney and Hong Kong were among the first to learn that their functions were no longer necessary. "If you find out about a job, tell me," said a banker leaving the Hong Kong office on Monday.

Staff leaving Hong Kong wore envelopes with the bank logo. Three employees took a picture next to a Deutsche Bank sign outside, hugged and then stopped a taxi. "They give you this package and you're out of the building," said one stock trader.

At the bank's Wall Street office, staff affected by the cuts were summoned to the cafeteria to learn about their future. A notice in the lobby of the building warned that the place would be closed until 11.30 am local time.

Hundreds of employees were informed during the meetings that their posts were disappearing, according to Reuters sources from the bank. They also received details of their dismissal packages. A source said that staff could be seen saying goodbye to their colleagues as they left the cafeteria. Outside the bank's offices, an employee said the cuts were feared for weeks.

The City and Wall Street, the most affected

A few hours after Hong Kong personnel left, Deutsche Bank workers left the offices in the City of London, which together with New York will suffer the brunt of the cuts. They also carried envelopes from the bank.

"I got fired this morning, there was a very quick meeting and that was it," said one worker, who left while Deutsche Bank's CEO, Christian Sewing, was inside the building in a conference call with journalists.

Few employees wanted to talk outside the bank's London office, but the talk resumed at the nearby Balls Brothers pub at lunchtime. "They fired me, where else could I go?" Said a man who had just lost his job in the equity sales department.

There were also layoffs outside the main financial centers. An employee of Deutsche Bank in Bengaluru said that the first thing they said to him and his colleagues was that their jobs disappeared. "The mood is quite hopeless at this time, especially among those who have a single salary or a large financial burden, such as loans to pay," he added.

For those who lose their jobs in the equity area, finding a new one can be difficult, as the sector is still dealing with higher costs of the new European regulations on stock trading.

"The job market in equities will be very difficult," said George Kuznetsov, head of research and analysis at the Coalition, which analyzes the investment banking industry.