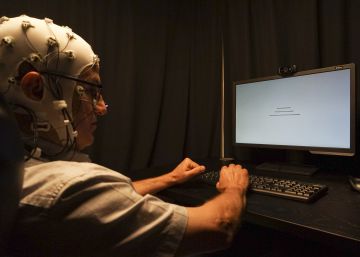 The philosopher Friedrich Nietzsche described him, more than a century ago in a letter to his doctor, as a "terrible burden" that did not let him think or write. More graphic, Valentí Vilar says today, hooked on an analgesia dropper at the Vall d'Hebron hospital in Barcelona, ​​which is "like a steamroller in the head." "As if you were stuck a punch inside the eye to the neck," synthesizes Anahí Rius, while the corticosteroid runs through his vein to the bloodstream. Each in its own way, but all agree: migraine does not give barracks and the intense headache it causes is completely disabling. This neurological disease affects 12% of the population and is, in fact, the sixth disease that causes more disability. But little is still known about her and how to stop her.

"It's like your brain is in a wheelchair," exemplifies Dr. Patricia Pozo-Rosich, a neurologist at Vall d'Hebron. To combat patient ignorance and encourage migraine research, this specialist has been in charge of the Migraine Adaptive Brain Center, a specialized unit within Vall d'Hebron to study the brains of patients with this disease. This center, pioneer in Spain, brings together the study laboratories and consultations in the same space to bring the most basic research to the reality of the sick. "We want to study adaptive and sensory cognitive networks in the brain. Research ranges from the most preclinical parts to educational programs for patients," says the neurologist.

The brain of a person without migraine is able to adapt to the environment and eliminate stimuli that are not necessary. In contrast, migraine sufferers have problems adapting to changes. An intense light, which can be uncomfortable for the general population, is capable of causing a very strong attack in a patient suffering from this ailment. These acute episodes, which usually last between four and 72 hours, generate intense headaches that prevent a normal life. At that time, what happens in the brain environment is an inflammation of the meninges due to the release of inflammatory substances from the trigeminal nerve.

The new center, which has had the participation of the La Caixa Bank Foundation in its implementation, It is designed and devised by and for patients. People who suffer from this condition have, in addition to severe headaches, hypersensitivity to light, noise and nausea, among other symptoms. Therefore, the unit has less intense lighting, is quieter and is painted with colors that do not intensify the symptoms of patients.

The sick become "microexperts" since they enter through the door. A tablet awaits you at the entrance to inform you about your state of health and your quality of life. For example, how many migraines they have had in recent days, what they did when they suffered the attacks … "The patient is already beginning to share data about his illness. We would like to be able to diagnose migraine in a way beyond the clinic [ by the symptoms referred by the patient.] And we also want to predict the attacks, which will allow us, then, to modulate their intensity, "he explains. Well-Rosich.

In addition to consultations where neurologists can visit patients – they serve about 8,000 a year alone in Vall d'Hebron-, the center has small laboratories to measure the electrical activity of the brain of patients before certain stimuli. The unit also has a day hospital so that patients, such as Valentí and Anahí, go directly there when they suffer an attack. "So you avoid the pilgrimage in primary care, emergencies … Here you get a very personalized attention," says Valentí, who is 60 years and a half with migraine in tow.

Online gambling addiction: an invisible cage that has been strengthened by the pandemic :: Prensa Ibérica para Orange