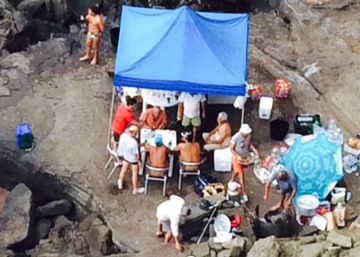 The case of the sergeant of Seprona Gloria Moreno will be investigated in the Central Military Court after he has opened preliminary proceedings after the complaint that Moreno filed against two superiors and another civil guard for allegedly subjecting her to "a strategy of harassment and demolition." Moreno's complaint comes after his superiors, a colonel and a captain, opened eight disciplinary proceedings, according to his lawyer, that he organized an operation in 2015 to discover a group of poachers who had been hunting and cooking cinderella shells for years, a protected species.

The Central Military Court number 2 declares, in a car signed this Thursday, October 10, competent to investigate Moreno's complaint and open preliminary proceedings. The complaint was filed in the military court of Las Palmas, but as one of the defendants has superior rank to commander or corvette captain, the appropriate jurisdiction is that of the Central Military Court. Moreno accuses Colonel Ricardo Arranz, Captain Germán García and civil guard Miguel Ángel Padial of acts constituting abuse of authority.

According to the complaint, before the arrival of Sergeant Moreno to Lanzarote there were numerous complaints from environmental organizations and environmental defenders who warned that in the uninhabited islet of Alegranza, it belongs to the Chinijo archipelago, a nature reserve since 1986, they had been organizing since The 90s Cinderella hunt hunts. Moreno organized an operation with Fuerteventura agents and surprised 19 people roasting and eating chickens of this protected species. The poachers, among whom were relevant people from Lanzarote and other islands, such as a well-known businessman and a national policeman, were tried a few months ago and sentenced to pay the highest fine provided in the Criminal Code for looting the nests.

From that operation "begins the strategy of harassment and demolition against Ms. Gloria Moreno in the form of persistent and repeated opening of disciplinary proceedings," said the complaint, collected in the order of the military court. The sergeant's superiors initiated eight files against her. Of those sanctions, two that reached the jurisdictional route were annulled, another ended without a declaration of responsibility and the others were left to expire. The defendants "persecuted the sergeant in spite of his diligent action," the complaint continues, through "multiple acts of harassment (…) tending to place it in a permanent situation of vulnerability." The court will take a statement from the sergeant soon.

Meanwhile, Moreno faces in the next few days a trial in Las Palmas for alleged falsehood in an official document in which the Prosecutor's Office asks for four years in jail. The facts that have led to this procedure also start from 2015 and the operation against the shepherds on the islet of Alegranza. The sergeant sent a letter to his chief captain (Germán García, against whom he is now complaining in the military court) denouncing alleged irregularities by a subordinate of his who he accused of having notified a poacher of shearwaters that the Seprona planned an intervention on the islet in 2013. In the report, Moreno related the statement made before her by a witness who incriminated Padial.

The Civil Guard opened an internal investigation, which was filed, and also judicial proceedings, which were also filed. The poacher who was allegedly alerted by the civil guard was among those Moreno discovered in fraganti in the 2015 operation. After filing the investigations, Padial denounced Moreno, who will now sit on the bench next day 22 for having drafted and moved to a superior the writing.

The case of Gloria Moreno has led to the creation in Lanzarote of a citizen platform called Justice for Glory and from an association, AGM, that has raised funds to defray its legal defense.