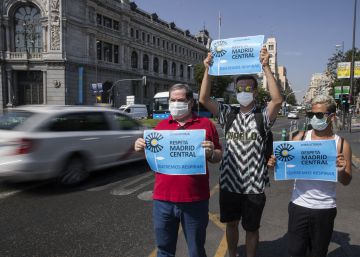 The fines are returned to Central Madrid. Five days after the entry into force of the moratorium Approved by Mayor José Luis Martínez Almeida (PP), who governs with Citizens, a judge has paralyzed the measure. The order of the court 24 of the administrative contentious law imposes as a "provisional precautionary measure" suspend the moratorium of fines; a decision that can not be appealed. Judge Jesús Torres Martínez, head of the court, has given the City Council a period of three business days to explain his position. (Read the auto that paralyzes the moratorium on fines in Central Madrid (PDF))

The suspension of sanctions, approved by the Consistory, became effective on July 1, but the City Council agreed on the measure on June 27. "The judge's order admits the appeal, but also suspends the agreement of the Junta de Gobierno of June 27: Central Madrid is now in force as we have known these months," said Paco Segura, coordinator of Ecologists in Action, which together with Greenpeace – and other organizations that form the Platform in Defense of Central Madrid that brings together more than 80 entities – had presented an administrative contentious appeal against the right moratorium early this Friday. A day earlier, on Thursday, the PSOE had also gone to the courts to demand the annulment of the municipal decision to consider it "illegal".

From the organization, which convened a press conference late on Friday to communicate the news, acknowledged to be "delighted": "The judge has given importance to the health of people against the supposed right to go by car." On the one hand, the car considers that there has been "a substantial change" in the plan established by former Mayor Manuela Carmena (now Madrid) -and finds no reason in the moratorium because there was already a period of notices when the measure started, in November 2018-. On the other hand, estimates that the de facto stoppage of MC produces "an evident emission of polluting gases in the area of ​​low emissions" due to the entry of "unauthorized polluting vehicles" that can now cross the area "without limitations or control" . All this would cause a prejudice on the "public interest".

The court has considered the arguments of the ecologists in which they explain that the moratorium on fines produces an "injury to the general interests". They also consider that measures such as Central Madrid are "essential" to comply with European and international legality in environmental matters. "Justice paralyzed the moratorium on Central Madrid! This victory is of all those that you have mobilized and shown support. Touch not to lower your arms and keep fighting, "celebrated from the Platform in Defense of MC.

The collective gathered in the Gran Vía last Saturday, with more than 40 degrees and in full heat wave, tens of thousands of people -10,000, said the National Police; 60,000 people, according to the organization- against the paralysis of Central Madrid. In this area in the center of the city, residents and public transportation can circulate; non-residents can access as long as they have an environmental label and go to a public parking lot. The fines for access without permission to the Central Madrid area are 90 euros (45 for early payment). (This is how Central Madrid works)

"We are happy and satisfied with the suspension of the moratorium," said the spokesman of the socialist municipal group, Pepu Hernández. The PSOE presented a resource similar to that of environmentalists on Thursday, but in your case, the judge decided to give the Town Hall a hearing, that is, to listen to him before making a decision on the precautionary measures requested. Socialist sources explain that in both cases the arguments were similar. On the one hand, they explained that "the suspension of the fine supposed de facto eliminate the Low Emissions Zone", on the other, "there was a very important risk to the health of people", and thirdly, they pointed out that "Spain it risked the EU reactivating the sanctioning procedure "for exceeding the legal limits allowed for air pollution.

For the lawyer of Ecologists in Action, Jaime Doreste, "the fines should be reactivated on Monday" because the judge has requested that, for his part, police sources explained that the reversal of the moratorium could be delayed "until Tuesday or Wednesday, as soon". Before suspending the moratorium, the City Council must be informed of the car: at the end of Friday, Cibeles had not received any notification. This will not be done "overnight," the agents say, since any sanction without prior notice could be nullified.

Ecologistas en Acción recalled that Madrid has never met the maximum values ​​set by European and Spanish legislation for nitrogen dioxide since these limits are in force (since 2010, although it did not comply before either). They have also explained that thanks to Madrid Central have achieved "great progress." Thus, they point out that the average values ​​of the entire pollution measurement network (24 stations) for nitrogen dioxide during the second quarter of the year have been the lowest since there are records: with 25 micrograms of contaminant per cubic meter of average air between April and June.

A few days ago, the environmental organization showed in a report (based on official data) that showed that the second quarter of the year, the only one with sanctions, has been the best in terms of pollution of the last decade. "In a few months of operation has achieved historical reductions in pollution levels," summarizes the NGO.

Madrid Central is an initiative that was already proposed by the previous mayors of the PP (Gallardón and Botella) and that the Consistory of Manuela Carmena launched for reasons of public health due to the fight against pollution -propulsed by the European Commission-. With the restriction on traffic, it is expected to reduce the emission of pollutants in the area by 40%. Many European cities have taken measures against the fumes of cars, but only four have gone further than Madrid and have imposed a toll to enter the center: London, Milan, Stockholm and Gothenburg.

Since the start of the moratorium, last Monday, the capital has suffered traffic jams and collapses both in the interior of Central Madrid (with an area of ​​4.7 square kilometers) and on the M-30, but also in the vicinity of the circumvallation and access. This is verified by the Mobility Management Center, dependent on the Consistory. Although it is a municipal agency, from the City Council began a war of figures and they contributed their own balance: "There has been no negative repercussion neither in the traffic nor in the quality of the air", affirmed this Thursday Borja Carabante (PP), delegate of Environment of the City council. The data of the Municipal Transport Company, which publishes a daily report on the operation of its public bus network, has recorded incidents and delays throughout the week.

The Community of Madrid, governed by the PP, has tried to torpedo in all possible ways Central Madrid. The Executive of Angel Garrido (now in Citizens) took to the courts the star project of Manuela Carmena "for lack of paperwork" and requested precautionary measures to stop it. The Superior Court of Justice of Madrid (TSJM) has twice rejected the requests of the regional government, although he has not yet pronounced on the merits of the matter. Madrid Central has faced the Community and the City Council from the beginning. In October, the regional administration asked the Government of Carmena not to carry out the measure. Once it was successfully established, on November 30, the Executive of Garrido did not reinforce public transport as requested by the Consistory (in part due to the lack of trains and train drivers in the Madrid Metro). And then he took the measure to court.

Now that the mayor, José Luis Martínez-Almeida (PP), has left without effect the fines of Central Madrid, the PSOE and environmental organizations have denounced the City Council for removing the special zone, the opposite for what the Community denounced (establish it ).

Before the start-up of Central Madrid at the end of 2018, there were already four areas in the capital where access to cars is limited (residential priority areas or APR of Cortes, Letras, Embajadores and Ópera), which were included in Central Madrid.

Pollution has become one of the main concerns of cities. The European Environment Agency estimates that in Europe there are More than 400,000 premature deaths per year due to pollution (In Spain, 6,084 annual deaths are attributed to exposure to nitrogen dioxide). Until now, cars occupy most of the urban space: in Madrid, for example, 80% of the city. That is why City Councils want to redimension their streets to protect health and the environment and give greater prominence to pedestrians and other types of mobility. London, Berlin and Paris advance in this line, such as Barcelona, ​​Seville, Pontevedra and Zaragoza.