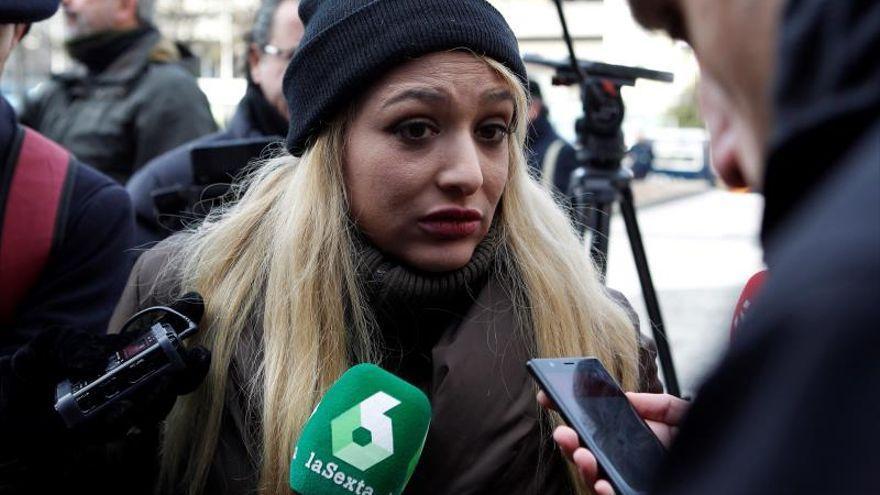 A judge has prosecuted the spokesperson for Hogar Social Madrid, Melisa Domínguez, for a crime of disobedience or resistance to law enforcement officials. The facts investigated happened in january 2020, when members of the ultra-right group went to the headquarters of the PSOE to demonstrate after that same day the Police had evicted them from a building they were occupying near Plaza de España (Madrid).

In a car, issued on February 15, the magistrate of the magistrate court number 3 of Madrid states that Domínguez, accompanied by fifteen members of the far-right organization, arrived at the headquarters of the PSOE “carrying a banner with the inscription ‘stay standing in a world in ruins ”. The protesters sat on “the ground in the area of ​​the access doors and in the existing space up to the access control lathes to the facilities.

“Despite the multiple times in which the PSOE security officers communicated to Mrs. Domínguez Ruiz, as a representative of the group, the need for them to leave the place and clear the entrance to the building, all of them continued in the place during several minutes, forcing the presence of the police to be required, ”the car continues, advanced by the Ser Chain and to which elDiario.es has accessed. With the arrival of the agents, Domínguez’s colleagues “agreed to leave,” however the leader of the far-right organization “persisted in her refusal, thereby forcing the police to forcibly evict her,” picks up the car.

In the letter issued, the judge ruled out that Domínguez had committed a crime of trespassing, as requested by the defense of the PSOE, which exercises the private prosecution. For the magistrate, “viewing the content of the images provided is enough to verify” how neither Domínguez nor the rest of the protesters “tried to pass the access turnstiles to the party facilities, standing in the access area and at the gates of entrance to the building from the street ”, although at the same time he acknowledges that“ the presence of the group in the place made it difficult to enter and exit the party headquarters ”.

The Socialists have appealed the judge’s decision. In the allegations presented, the PSOE highlights that the Social Home spokesperson could be charged with another crime for public disorder. To justify their argument, they emphasize that Domínguez “acted under the protection of a group of protesters, invading and occupying, against the will of its owner, the headquarters of the Spanish Socialist Workers Party”, which was open to the “public” at that time and “that with this action caused a relevant disturbance of the public peace and in the normal activity of said work center ”.

The magistrate ruled out the crime of trespassing, considering that the “only intention” of Hogar Social’s action “was to echo their protest at having been evicted” from the property they were occupying and “that their group messages had repercussions ”.