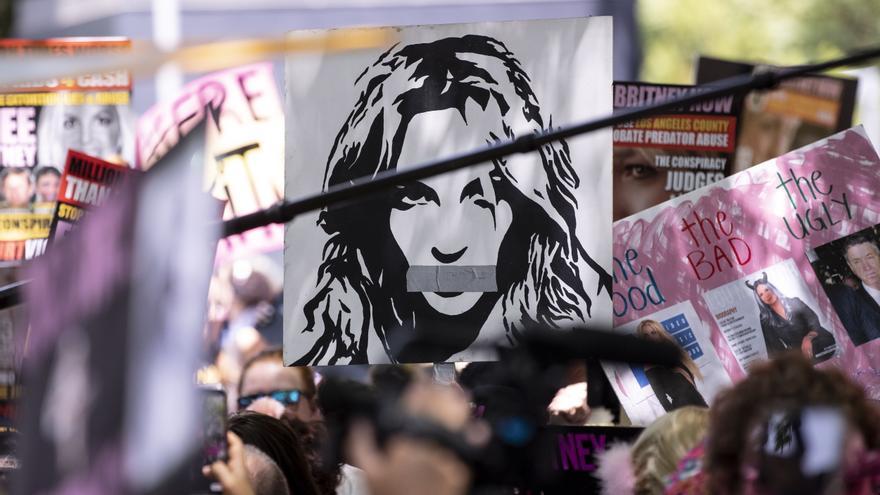 Judge Brenda Penny ordered this Friday the end of the legal guardianship of the American singer Britney Spears immediately after 13 years. This decision is made more than a month after the Superior Court of Los Angeles (USA) determined that his father would no longer be his legal guardian and declared temporary custody. The ruling represents a new victory for the artist, who last June spoke out for the first time against her father, who ceased to be her guardian in September by order of the same judge.

Custody of the singer was then held by an official of the state of California and it was not until this Friday when Spears was finally free of any legal guardianship. After the decision was made public, hundreds of followers of the 39-year-old singer, gathered outside the Los Angeles Superior Court headquarters reacted immediately by throwing pink confetti into the air and chants in favor of Spears, whom he had crossed out as ” abusiva “your legal guardianship in advance.

Speaking before that court in June, Spears begged to be allowed to regain her life and denounced that, although she would like to have a baby, her guardian, then her father, would not let her go to the doctor to remove the IUD (intrauterine device). . The case took a turn in September after The New York Times published a report with statements from three people who had worked for the artist during her guardianship: a security employee, an assistant and her wardrobe manager. Among the thorniest testimonies, the former security employee claimed that the father had microphones placed at Britney’s house, whose calls and messages were intercepted, including communications with her own lawyer and her children.

During her childhood, and supported mainly by her mother, Lynne Spears, the young woman had left her hometown in Louisiana and had already participated in the children’s program Mickey Mouse Club. But the ultimate success came in 1998, when Britney Spears released her debut album. Her first video clip, at just 16 years old, showed her as a schoolgirl with a shirt tied over her navel and an open skirt. A hypersexualized teenager that all young women wanted to look like. Baby one more time. “Girls want to be grown-ups at that age, but they are girls,” recalls Kim Kaiman, the executive who helped build Britney’s image in her early years: young and innocent, sexy and in her underwear. In the personal sphere, says the marketing expert, she was a “serious and focused” girl, far removed from the image she would project a few years later.

In 1999, Spears began dating Justin Timberlake. In those years boybands triumphed and he was the star of one of them, N Sync. The two became the fashionable couple in America: young, handsome and successful. Until the courtship ended in 2002. If until then one of the most recurring topics of conversation had been Britney’s virginity, from there, and spurred on by Justin, who set about stoking his ex-girlfriend with vexatious innuendoes and even with a song, the American media made it their punching ball.

In an interview on ABC, Spears had to face the question that an entire country was asking: “You have broken his heart. You have done something that has caused him a lot of damage, what have you done to him?” Nobody considered that relationships end and that there does not have to be a bad guy. Much less that the breakup was Timberlake’s fault. Paradoxically, a couple of weeks ago Timberlake publicly apologized to Britney Spears and Janet Jackson for their macho behaviors towards them. Their reputations plummeted after they crossed paths: the first, after their comments after the breakup, and the second, when, during their joint performance at the 2004 SuperBowl, he discovered her breast.