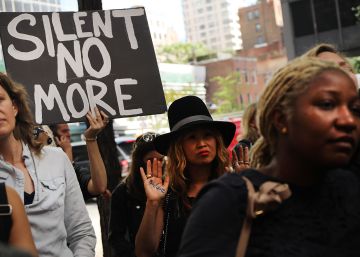 "When the first time you had sex was a violation," said the text message sent by G.M.C., 16, to his friends, Attaching a video in which he was seen penetrating a young. For months, the aggressor circulated the images despite the fact that the victim asked him to erase them. Prosecutors recommended that family court judge James Troiano, of New Jersey, transfer the case to a grand jury for the defendant to be tried as an adult, but he refused, claiming that aggression is only "a traditional violation" when two or more men They attack a woman at gunpoint. The magistrate asked for indulgence for the young man, arguing that he "came from a good family" and that he is "clearly a candidate" to go to a good university, and he scolded the prosecution for not warning the complainant that filing charges would ruin his life. from GMC, as described by the ruling issued in June by the New Jersey Court of Appeals, that this Wednesday has advanced The New York Times and that it revokes the decision of the family judge.

The facts go back two years in time. Mary (fictitious name), 16, was at a party along with 30 other young people. Accompanied by a group of boys, stumbled into the basement, visibly drunk. Mary sat on a sofa and the young people sprayed her butt with Febreze (a brand of environmental deodorant) and then whipped her so hard that the next day she had handprints on her buttocks, always according to the report of the prosecutors quoted in the Judgment of the Court of Appeals. Then, G.M.C. He recorded a video in which he could see the torso and the head hanging from it, and to him penetrating it. The next day, without knowing what had happened, the young woman told her mother that she feared that "sexual things had happened at the party" without her consent. In the following days the video began to circulate in which G.M.C. He allegedly raped her.

The victim asked the young man to erase the video, but he denied recording the meeting and accused his friends of lying. The months went by and the file kept going from one hand to another until finally Mary filed charges of first- and second-degree sexual assault and invasion of a minor's privacy. "Unfortunately, after obtaining authorization from his superior, the first investigation officer urged G.M.C. and his friends to delete the video, which apparently did, "the court documents say. Today there is no such proof.

"At the time that (G.M.C.) took Mary to the basement, she was visibly intoxicated and could not walk without tripping," the prosecutor wrote. "During the attack, the lights were off and the door was blocked by a table football, recording a video with a cell phone while the aggression was committed was a deliberate act of degradation," the researchers concluded. In September 2017, the Monmouth County District Attorney's Office recommended that Judge Troiano refer the case to an adult criminal court, in part because the child's actions were "sophisticated and abusive." "This was not a child misunderstanding of the situation," the prosecutor wrote, quoted by the Times: "The behavior of G.M.C. was calculated and cruel". But the Monmouth family court had another point of view.

Judge Troiano clarified at the hearing on September 22, 2017 that there was a difference between "a sexual assault and a rape." To argue his refusal to transfer the case to an adult court, he said that this is only done when it is a "traditional violation", in which two or more men threaten the victim with a weapon, beat him and abuse him. she in a secluded place. In addition, he questioned whether Mary's level of intoxication was high enough that she did not understand what was happening and dismissed the defendant's text messages because "young people say a lot of stupid things to their friends." Finally, he highlighted that G.M.C. "He comes from a good family that enrolled him in an excellent school where he was extremely well." "His scores for college were very high," he said, as if that had something to do with something.

Judge Troiano, close to turning 70, retired almost completely, was "severely reprimanded" by an appellate court in a "scathing" 14-page ruling that reverses his decision and in which he warns that he could not show prejudice in front of the privileged adolescents. The appeals court gave its approval on June 14 so that the case of G.M.C. was transferred to a grand jury, so that the young man was judged as an adult and two years later, justice was tried.