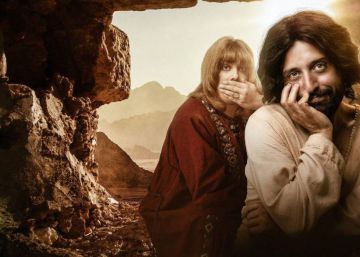 The Brazilian justice ordered, provisionally, that Netflix and the Porta dos Fundos production company remove from the air The first temptation of Christ, a Christmas satire in which it is suggested that Jesus had a homosexual relationship. The decision of Judge Benedict Abicair, of the sixth civil court in Rio de Janeiro, considered that “the right to freedom of expression, press and art is not absolute.” In the resolution, the magistrate added that “social networks are uncontrollable” and that everyone can enter the online video platform “even younger”.

The Association Center Dom Bosco of Faith and Culture launched a petition (with more than two million signatures) to request the veto to the work, which had been denied in the first instance. The appellate judge said his measure will continue to be valid until the merits of the matter are judged. Judge Abicair’s resolution, which can be appealed, says: “By virtue of the foregoing, I consider, therefore, more appropriate and beneficial, not only for the Christian community, but for the Brazilian society, mostly Christian, until judge the substance of the appeal, resort to caution to calm the spirits, so I grant a provisional preliminary measure as requested. “Netflix has not made statements on the case. Unofficially, THE COUNTRY knew that the platform has not received the Judicial notice.

The first temptation of Christ, Available since December 3, was criticized and caused controversy because the plot suggests that Jesus had a homosexual relationship. In the humorous satire of 46 minutes, Jesus (Gregório Duvivier) returns from the desert to his house – where he has prepared a surprise party for his 30th birthday – with a special guest, Orlando (Fábio Porchat), which implies that he and the Son of God have a relationship (he even calls him “mischievous Capricorn”). It was enough to fuel the wrath of Christians, politicians and pastors, which culminated in the attack with a Molotov bomb at the headquarters of the producer of the comedians.

This Wednesday, the vice president of Poland, Jaroslaw Gowin, also asked on Twitter that Netflix remove the Christmas special, which is in the global catalog of the platform. Gowin mentioned Reed Hastings, co-founder and CEO of Netflix, and attached a petition on-line from his country, in which more than 1.4 million people request the withdrawal of production from the streaming.

Interpol searches for the suspect in the attack

This Wednesday, the Brazilian Federal Police included the name of economist and businessman Eduardo Fauzi, a suspect of attacking the headquarters of Porta dos Fundos at the end of December, on the Interpol list, allowing it to be stopped by any police force in the country in which it is located. Fauzi remains unaccounted for since December 31, when the Rio Police tried to comply with the arrest warrant issued by Justice against him a week after the Molotov cocktail attack he committed on Christmas Eve. According to the Police, the businessman fled to Russia on December 29.

A Brazilian authority in Moscow, which did not want to identify itself, has begun to negotiate with the Russian Government to extradite Fauzi, As reported Globe News. The Brazilian Foreign Ministry informed that it has not yet contacted Russia and that the request for extradition corresponds to the Judiciary. For its part, the Ministry of Justice said that Rio de Janeiro has already requested the extradition of the suspect.