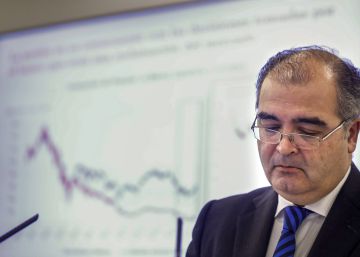 Ángel Ron, former president of Banco Popular Until February 2017, he has lost his first battle against Santander, the owner of the extinct entity. According to a judgment of first instance of Madrid, Ron has no right to collect the compensation of 12.8 million that supposedly corresponded to him by the statutes of the bank after leaving the entity that he presided for more than a decade.

The holder of the court 47 of Madrid understands that this right of retirement is a variable payment and, as the bank went into losses, should not collect it, as established by European banking regulations. Therefore, it establishes that it will have to return to the Popular what has been collected so far, 13,093 euros for an early waiver in 2017 and 215,546 euros of the 2013 and 2014 bonus. It also loses the right to receive 10,216 shares of Popular (already disappeared).

It is the first time that a court applies the so-called clause malus In the banking business. It was established by the European Banking Authority (EBA) in the crisis to curb the high compensation of bankers that left the entities after large losses.

According to the current pre-retirement, Ron had the right to collect 1.1 million annually until he turned 65, a contract that was outsourced in a policy of the Mapfre insurer, which has also been ordered to comply with the provisions of the sentence, something which had been denied after Santander's request.

The case was known in January 2018, cWhen Santander denied the collection of variable remuneration, including early retirement, the last two presidents of the Popular, Ángel Ron and Emilio Saracho, as well as the three CEOs: Francisco Gómez, Pedro Larena and Ignacio Sánchez-Asiaín. It prevented them from charging about 25 million. In the case of Ron and Gómez, he also claimed in a lawsuit the return of some quantities already delivered.

It is not the first blow Ron receives on this matter. ANDn June 2017 the Social Justice magistrate of court 33 of Madrid dismissed his claim, which claimed the bank a millionaire compensation for unfair dismissal. According to judicial sources, it amounts to 4.3 million, while the defense places it at 350,000 euros. The judge considered that he did not have an employment contract when he resigned, but that it was commercial, and notes that there are "suspicions of a possible fraudulent self-contracting."

The Popular outsourced this money to a Mapfre Vida policy, as the rest of the top executives have, which refused to interrupt payments when Santander requested it three months after buying the bank. Santander was forced to sue Mapfre as well.

The compensation that is in limitation is compensation compensation for which Ron promised, after his termination, not to work in any competing entity until the retirement age. Santander has argued that the suspension of this compensation was justified by Popular's millionaire losses in 2016 and not by possible criminal behavior. "Otherwise, there would be the paradox that Ron would be the only person who would not suffer the consequences of the resolution (not counting the loss of his investment in shares)," said Santander's lawyer, partner at the trial in June. of Uría Menéndez.

Ron's defense argued that this early retirement could in no case be considered variable remuneration because it was not subject to objectives, and has insisted that it was included in Popular's bylaws. In addition, he argued that the clauses malus / clawback They were not yet incorporated into Popular's remuneration policy.

For its part, Mapfre argued that there is not enough legal basis to void the policy because there is "no subordination" to banking regulation. That is, the clauses do not apply malus and clawback. Mapfre also argued that insurance legislation prevents recovering the amounts already paid to Ron.