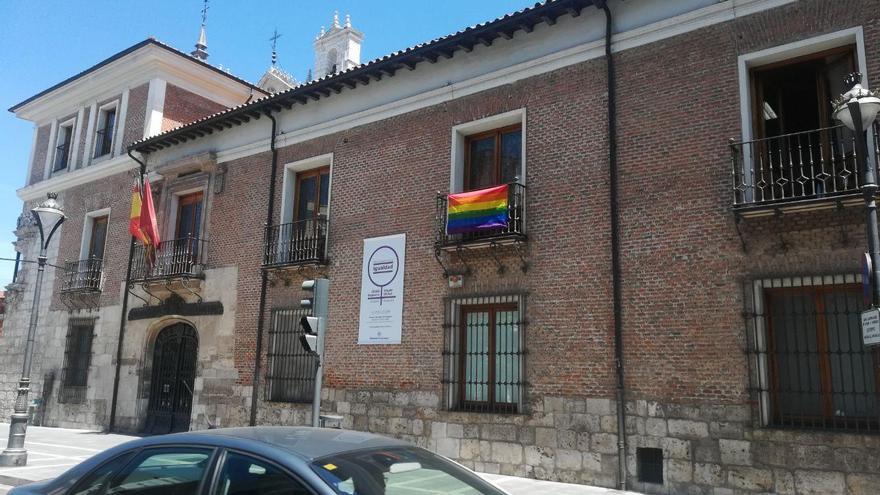 The sentence that condemns the Diputación is based on the application of a controversial jurisprudence of the Supreme Court in May of this year, that interpreted in a restrictive way the use of unofficial flags in institutional headquarters in a sentence, whether they are of a pro-independence nature, which was the substance of the matter then, or vindictive, such as that of the LGTBI collective.

The Administrative Litigation assumed the very precautionary measures requested by the ultra-Catholic association and ordered the withdrawal of said flag.

The Contentious-Administrative Court 3 of Valladolid assures that “little can be opposed to this jurisprudential doctrine, on pain of entering the absurd or the criminal illicit”. For this reason, he rejects the defense arguments of the Diputación and the Arcópoli association, which alleged a report from the Ombudsman among their defense arguments.

Judge Francisco Javier Zatarain y Valdemoro assures “that the ideological charge of this symbolism (the LTGBI flag) can neither be denied nor ignored if the slightest logic is used.” For this reason it also affirms that although the Diputación alleges that it did not place a flag but a hanging, it believes that this “does not add or take away anything from the debate.” And he reproaches that “that hanging located on a balcony different from the one on which the official flags are placed is nothing more than a simple mockery of the sovereignty of the Supreme Court (apart from going against the demonstrations posted on its website that qualify it as a flag Whether flag, hanging, banner, coat of arms, banner, ensign, banner, insignia, emblem, pennant, pennant, coat of arms, standard, distinctive, badge, pennant, script, oriflama, flag, symbol, sign, etc., to cover or suppose the slightest ideological charge, they cannot be exhibited under penalty of violation of the neutrality of the administrations. ”

The magistrate assures that the Constitution imposes “that public administrations must act with exquisite respect for it, and consequently, when they decide to place any flag or equivalent, verify its null ideological burden.” When considering the LGTBI collective flag ideological, he maintains that it should not have been installed on the balcony of the property.

The sentence condemns the Valladolid Provincial Council to pay the costs of the process, an amount limited to 1,000 euros.

The magistrate assesses another order of the Litigation of Valladolid number 4: “I do not share, at all and although they deserve the maximum of respect, the considerations made in the Order of the Contentious Court of Valladolid No. 4, according to which the aforementioned The flag lacks political ideology. For many reasons, but it is worth mentioning two: the RAE itself in the meaning number 8 of the noun flag defines it as ‘a cause that is defended or for which a party is taken’, the appropriation -or if you prefer political struggle- raised in relation to gender ideology, the situation of the LGTB collective, which obviously needs protection to obtain effective equality, the attacks on certain political leaders in the demonstrations that this group calls, or the proliferation of appeals before the Constitutional Court or ordinary jurisdictions, against political decisions of one or another bias, etc. “.

The national president of Christian Lawyers, Poland Castellanos, who filed an appeal against the Valladolid Provincial Council and who already managed to get the Administrative Litigation to assume the very cautious requested by the association and order the withdrawal of said flag. “We cannot enter into a flag war, because the only one that should fly on the balconies of public administrations is the Spanish one. We must respect all groups and lobbies, but that does not mean that we must contravene the law in favor of some and to the detriment of others “, has warned the president of Christian Lawyers.

Castellanos has censored the “ridiculous excuse” that the Valladolid Provincial Council used in his day when he pointed out that it was not a flag but a banner and has insisted that citizens “are tired that who should be the first to respect the law imposes an ideology on them “, something that, as has been the case, would mean entering the” war of yellow ties “again, something on which there is already jurisprudence.

Although his association also sued for prevarication against the president of the Diputación, Conrado Íscar, Castellanos assures that such action was initially rejected and the appeal, despite not knowing the result, imagines that it will continue or will have followed the same path.

“We do not want anyone to go to jail, what worries us is that those who should be the first guarantors of the law are those who use public buildings such as their private beach bar,” says the Valladolid lawyer.