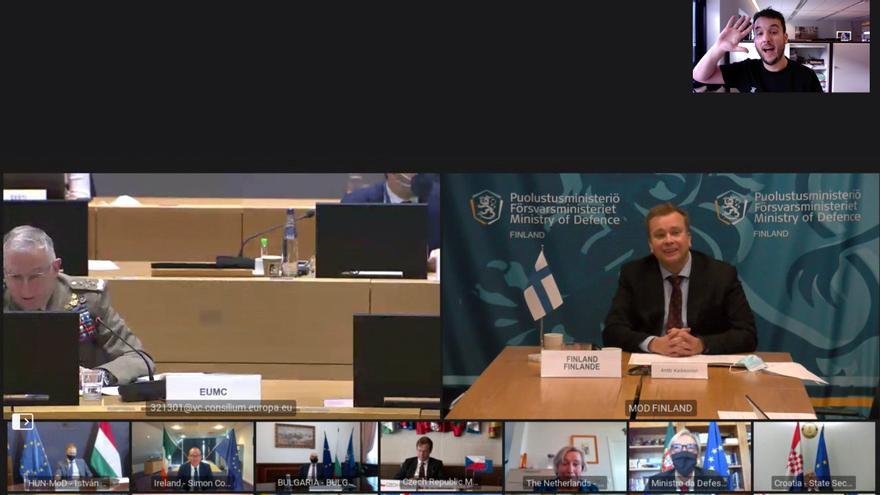 The virtual meeting behind closed doors of defense ministers of the European Union this Thursday has been briefly disturbed by the “secret” irruption on the screen of a journalist who took advantage of an oversight by the owner of the Netherlands to obtain the access code .

“Who are you? You are in our system. General, what do you suggest we do? General, you are right: we have to invest in privacy,” said the EU’s High Representative for Foreign Policy, Josep Borrell, surprised. , upon noticing the presence of the journalist, whose photo with a black shirt stood out from the formal attire of the rest of the participants.

Later Borrell, with humor, asked the reporter how he was and was interested in whether he was aware of where he had been from his computer. “Do you know that you are participating in a secret Defense meeting?” He asked the journalist who had identified himself at the meeting as “admin” (administrator).

The journalist for the Dutch medium RTL Niuws, Daniël Verlaan, immediately identified himself as a reporter and replied that he knew that he had infiltrated the digital chat. “I am sorry. I am a journalist from the Netherlands. I am sorry I disturbed your meeting. I am leaving,” Verlaan replied. Borrel then asked him if he knew that what he had done could be considered “a crime” and recommended that he leave the meeting “before the police arrive.” “I know, I know. That’s why I’m happy to go. Goodbye,” the reporter replied with a laugh.

Verlaan accessed the conference call thanks to the Dutch Defense Minister Ank Bijleveld mistakenly posting a photo on Twitter with part of the access code to the video meeting and the journalist was able to find out the missing figures.

By sharing the story on his social networks, the journalist has admitted his surprise after gaining access by only entering the PIN code. The Defense Council, according to Verlaan, warned that there would be “additional security” and has already reported the intrusion to authorities.