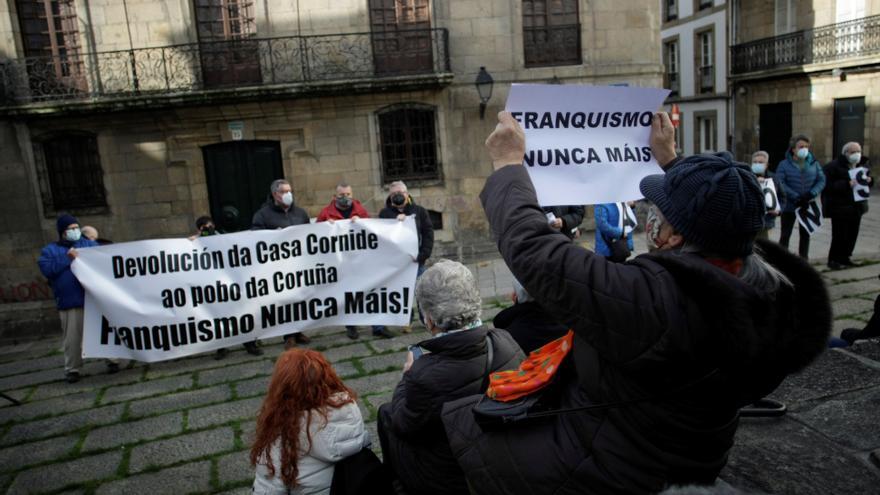 A Coruña, Dec 27 (EFE) .- A hundred people have participated this Sunday in a rally in A Coruña to condemn the “usurpation” committed by the Franco of Casa Cornide, after supposedly removing furniture and objects from the interior and will be carried in vans.

“The battle of Meirás is not yet over because it is followed by the battle of House Cornide. And we are also going to win this new battle! ”, The members of the Defensa do Común platform and the Cidade Vella Neighborhood Association proclaimed during the reading of the manifesto.

The event, organized under the motto ‘La Casa Cornide is from A Coruña. Return now ‘, has begun at 12.30 pm this Sunday in front of the aforementioned baroque palace, located in the Old City of A Coruña, and has had the intervention of the archaeologist Felipe Senén.

A group of people have unfolded a large banner with the slogan “Return of the Casa Cornide to the town of A Coruña. Francoism never again! ”, While other members of the convening groups have shown large letters that form the word“ thieves ”.

In his speech, Felipe Senén has demanded that the A Coruña City Council, the Xunta and the central government “do not allow this usurpation”, that they “stop” the looting and that they take note “in the face of provocation”.

For his part, the president of Common Defense, Manuel Monge, has read a few words from Manuel Rivas –who has not attended for health reasons-, with which he has called to break with “corruption” and to continue reinforcing “decency common ”that began with the ruling of the Pazo de Meirás.

Later, members of the convening organizations have read a manifesto, in which they have explained that this protest is based on the need to give “an immediate response” to the supposed movement of furniture of the dictator’s heirs, after the City Council announced that it would claim judicially the ownership of the property.

“The Francos failed in Meirás because civic mobilization and the court prevented them from removing anything from the pazo. They want to repeat the operation, but we are here to prevent the looting of Casa Cornide from continuing ”, they asserted.

In this sense, they have supported the initiative of the A Coruña City Council to file a lawsuit to annul the current property title of Casa Cornide for its incorporation into the municipal public heritage of A Coruña.

“We want the City Council to demand the involvement of the State and to carry out an inventory to find out what is inside the building,” they have demanded.

According to the historical, legal and artistic reports commissioned by the Consistory, they recalled that Pedro Barrié de la Maza won a fraudulent bid on August 2, 1962, for which he acquired the Casa Cornide for 305,000 pesetas, and then sold it to Carmen Polo for 25,000 pesetas.

In this process, the Ministry of Education would have exchanged Casa Cornide with the City Council in 1962 without disaffecting this asset from the use it had, which would have breached the current regulation, as explained by a study commissioned from the University of A Coruña, which it considers the swap and the sale “null”.

The protest, which has had the presence of different political representatives such as the BNG deputy in the Galician Parliament Mercedes Queixas or the spokesperson of this formation in A Coruña, Francisco Jorquera, has also demanded the withdrawal of distinctions from personalities linked to the Franco regime .