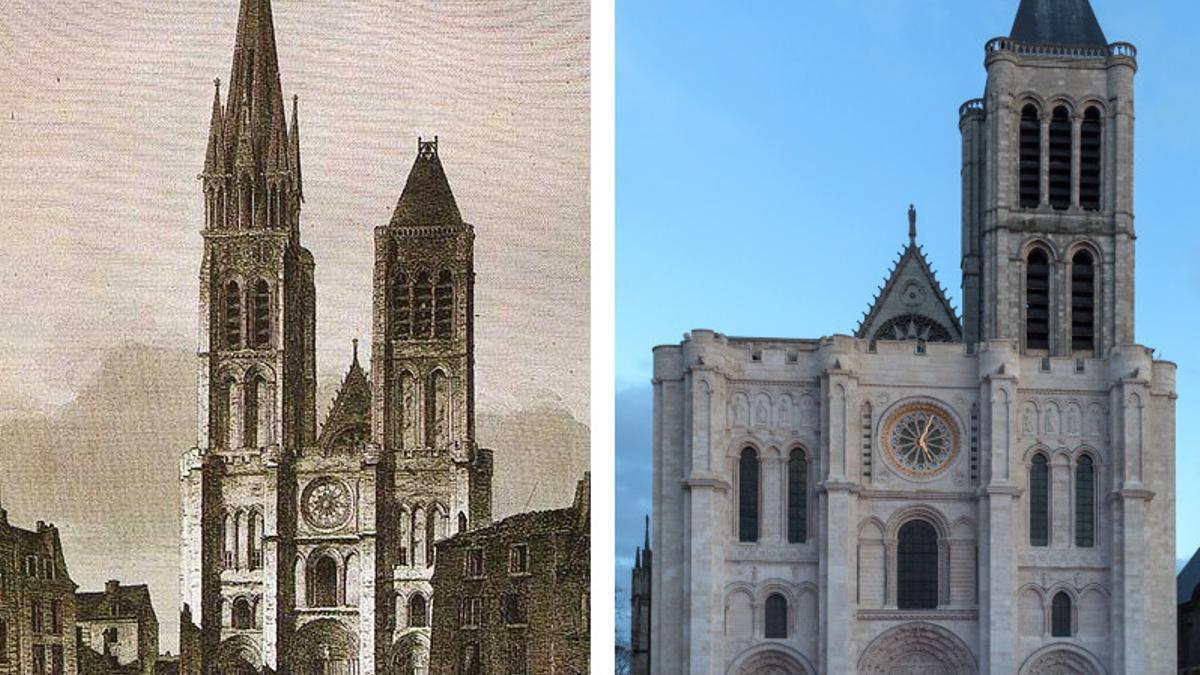 In 1845 a tornado struck Saint-Denis, the French basilica that experts consider the catechism of the Gothic art. The damage caused by the gale forced the dismantling of one of its two towers, whose stones would be stored next to the temple awaiting a future reconstruction that has lasted two centuries to become reality. In the 1970s, the mayor of the Parisian district where it is located (30 minutes from the center) asked the Government to recover the temple’s arrow, the ill-fated set of the tower and the spire that raised the span of Saint-Denis to the 86 meters. The idea then fell on deaf ears, but in the last five years it has been taking such serious steps that the works are called to begin this autumn. In the area of ​​heritage, the controversy was served: is it legitimate to rebuild a part of a first-rate historical monument amputated by the vicissitudes of history two hundred years ago?

An important group of experts believes not. Through a manifesto that they have spread in the French media, 128 historians and university students explain why the project goes against the preservation of heritage. First, because the works could damage an extraordinarily symbolic space for the country: the burial chamber destined to bury the French royalty, where the remains of Pepin the Short, father of the emperor, rest. Charlemagne. Second, because the reconstruction was born with the vocation of “self-financing” and has ended up involving the investment of more than 22 million of public funds. Finally, the document attacks one of the great arguments in favor of restoration. Detractors maintain that, of the 300 stones stored outside the temple, the amount of medieval elements would not even reach 3%, according to the latest study carried out by the Île de France region. Thus, most of the reconstruction would be carried out with modern materials.

Since the publication of the document and far from subsided, the controversy has not stopped growing. Among other things, because the case concerns basic criteria for the restoration of heritage in the 21st century – when to intervene and when not to – and because its hypothetical success could open Pandora’s box: works in cathedrals here and there with the recomposition of limbs amputated by time as a mere excuse. Hence, support for the manifesto has transcended French borders. Experts from Germany, Switzerland, Russia and even the United States did not take long to join the cause, to position themselves “against the arrow” of Saint-Denis.

Spain, a country as privileged as it is punished by its vast heritage, also had to speak out. The historian Eduardo Carrero Santamaría —one of the two Spanish signatories, the other is Professor Gerardo Boto— fully participated in the conception of the document, to which he did not hesitate to adhere. “Does it have any logic to put back some stones precisely now that History placed outside of that place two centuries ago? The answer is that no, that the project responds rather to the whim of some people of the XXI century”, reflects Carrero, who he assumes the controversy as an intellectual discussion, fleeing from extreme positions. However, the expert is clear about the possible consequences. “An intervention of these characteristics in a historic building that has changed over the centuries is not like playing with a meccano, it must be protected to prevent it from suffering,” he warns.

The temperature of the controversy has risen, without actually disrupting the future of a project that has already had to face serious setbacks. Even from the beginning, when the François Hollande Executive presented the works in 2017, he had to deal with the unfavorable report from the Commission for Historical Monuments. In 2020, with Macron in the Elysee, the Minister of Culture committed public money for the works, recognizing the weakness of the initial trump card of self-financing. The project, which wanted to copy the model of the Sagrada Familia – whose works are financed entirely with the collection of visits and private donations – was finally called to survive with the money initially consigned to rescue Notre Dame from the effects of the devastating fire. of 2019.

Not a step back. The Government had seen in the spectacular nature of the works a whole hook to invest in a traditionally disadvantaged neighborhood. Two world-class landmarks would help multiply the tourists of Saint-Denis, whose 140,000 annual visits are far from Notre Dame, with a pull ten times greater. Two milestones would put the focus on the works of the basilica. The closest, the 2024 Olympics in Paris. Next on the calendar, the aspiration to turn the district into a European cultural capital in 2028, precisely the year set to finish the arrow’s reassembly.

In this regard, Eduardo Carrero wonders “if this really is what worries most in the society in which we live” or “is it just another political program to divert attention from fundamental issues”. But at this point, it is worth questioning the professor at the Autonomous University of Barcelona why Notre Dame can recover its pre-fire appearance, arrow included, and Saint-Denis, no. “I do not dare to make comparisons with Notre Dame, a monument only comparable to the pyramids of Egypt. In any case, Saint-Denis lost its tower two hundred years ago and has just undergone an extraordinary restoration on which now it wants to be intervened again “, he reflects.

Given the battery of arguments offered by skeptics, it is possible to think that there have only been two positions. The favorable of the institutions and the contrary, of the theorists. But the surprising thing is that it has not been like that. Mathieu Lours – a French scholar of cathedrals in modern times – detached himself from the critical version with a rostrum in which he returned the question to the detractors: “Why doesn’t Saint-Denis have the right to his arrow?” The researcher listed a series of estimable arguments, such as the drama experienced in the 19th century by the Parisian neighborhood, which experienced the disappearance of the north tower “as a true amputation” of something that belonged to them. Likewise, Lours justified that medieval builders never gave up rebuilding the damaged part of a temple when possible.

But, without a doubt, the most profound argument – and at the same time, the most controversial – pointed to the need to put a historical monument at the service of the society of its time. In other words, restoration with materials such as concrete or steel was fully justified if they could “resurrect” a building doomed to ruin. In other words, if the priority was to respect the events of history, a large part of our monuments would have arrived to the present smashed, victims, for example, of the military bombardments.

Although he “deeply” respects the figure of the French scholar, Carrero Santamaría believes that “the consideration of our temples as” open factories “is a bit scary. And it is explained. “Wanting to keep historic buildings alive as was done in the past can lead to a dangerous game, because it would open the door to doing almost anything in a monument.” The professor points to a capital fact: “At present we have a very different conception of conservation than that of our ancestors.”

On the board and playing at home, the historian cites the case of the Santísimo chapel in the cathedral of Mallorca. There, preparations for the installation of a ceramic mural created by the artist Miquel Barceló brought to light more than a decade ago one of the few examples of medieval mural painting on the island. “However, we only know these paintings from photographs, since they have been trapped under Barceló’s work,” explains Carrero. To further complicate matters, the attractive intervention of the Balearic artist succeeded in multiplying visits to the cathedral, leaving the valuable archaeological find in the background.

And on the extreme side, a contemporary Spanish case widely contested by the cultural sector that would overturn the arguments of Mathieu Lours. The controversial placement of the new doors in the cathedral of Burgos it shows — according to Carrero’s criteria — that you can’t do almost anything in a historic building. Especially when the intervention in a masterpiece that has completed eight centuries of life, if finally approved, could even jeopardize the Unesco world heritage declaration of the Gothic icon.

In any case, both, opponents and debtors of the recovery of the north tower of Saint-Denis, take the fight sportingly, without dogmatism. Critics call, among other things, to respect the funerary space of the French kings. For defenders, “repairing a 176-year-old heritage injustice in a building that is a fundamental part of the History of France” is precisely one of the most compelling reasons. Nothing is black or white in matters of heritage.