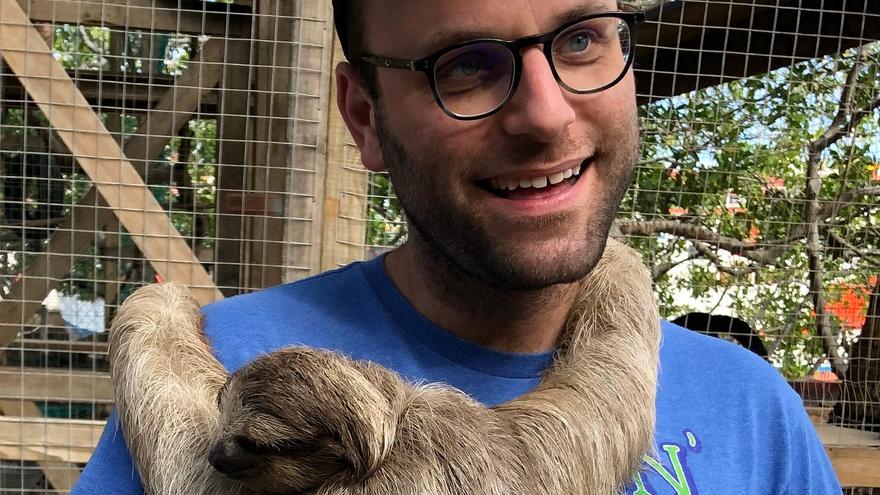 “Being president of the United States is basically the easiest thing in the world. All you have to do is get to the places on time,” says the protagonist of one of the stories that are part of Someone who loves you with all your wounds.

We will soon discover that it is not that he is, indeed, a president of the United States. She has a small-time job at a theme park called Presidentland: she makes a living by dressing up as the 21st president, Chester A. Arthur, and taking pictures with visitors. With bobblehead included. Only nobody wants to take pictures with him, because deep down nobody knows Chester A. Arthur. All his ambition comes down to one day wearing the Washington, Lincoln or Roosevelt suit, to get up enough in tips to invite his partner Emika, who works in wardrobe, to dinner.

We are talking about one of the characters from the first book by Raphael Bob-Waksberg, creator of series like BoJack Horseman or Undone, which has reached our bookstores hand in hand with Circle of Chalk, with translation by María Campos Galindo. Like him, the vast majority of the characters that inhabit the world of Someone who loves you with all your wounds they are adorable losers. Broken people, unable to defend themselves against direct blows from their beloved and ruthless modern America. People who look to their close affections for the only possible pain reliever.

This book is made up of extravagant, hallucinatory and beautiful stories. Stories like that of a woman angry with her playwright brother for turning the suicide of a relative into a play, that of a dog named Rufus who does not understand why his owner is so clumsy or that of some superheroines whose powers only work with a level of unhealthy blood alcohol.

But no matter how crazy its premises are, no matter how different the formal resource used to narrate them may be, all the stories that make up Someone who loves you with all your wounds they are part of the same emotional fabric. More than a mere compilation of stories, it is a stimulating journey, at times really great, to the creative universe of Raphael Bob-Waksberg, whom we knew as a screenwriter but not as a writer.

“The writing process was very lonely, but the change of pace suited me well,” says the creator of BoJack Horseman to elDiario.es. In his work as a scriptwriter, each occurrence was decided and debated as a group. This book is entirely your responsibility. “I liked the freedom that comes with working on something new. In the series I took a lot of liberties regarding how to tell what I wanted to tell, but despite that there were certain rules about how BoJack’s world worked. On the other hand, with this one book I was able to create completely new worlds, governed by completely new rules in each story.

The writer does not deny the influence of BoJack Horseman on Someone who loves you with all your wounds. “At the end of the day I worked on this book and the series at the same time: I’m sure both projects influenced each other.” And in fact he says that “we did an episode in the fifth season that was a monologue. BoJack was talking about himself for twenty-five minutes. And what made me think it would work was that he could sustain the narrative with the voice of a single character. , because he had already achieved it in the stories he was working on for the book. “

Bob-Waksberg refers to Free Churro, sixth episode of the fifth season of the series, considered nothing less than one of the best chapters in the history of television on IMDB. An absolutely brilliant and groundbreaking episode in an animated series, which further won the favor of critics and audiences. That season was awarded by the North American critics -Critic’s Choice Awards-, the writers union -WGA-, and the specialized sector -the Annie Awards of the International Animated Film Association-.

Like in BoJack Horseman, and later in Undone, anxiety and depression fly over many stories that make up this book. For Bob-Waksberg, self-absorption and loneliness are great evils to combat from culture, from creation. “It is dangerous to become too attached to our own pain, to think that that is the only thing that defines us,” he explains. “Sometimes we take care of our wounds like little kittens, when it would probably be healthier for us and the people we love if we could find some way to move on, despite being hurt.”

On Someone who loves you with all your wounds one can recognize notes that harmonize Bob-Waksberg’s concerns with those of American writers like AM Homes or Lionel Shriver, to give two examples. They are bridges that can be seen in his hurtful humor, his evident talent for generating indelible images, and above all a deep compassion for his characters.

He, for his part, adds other references in his pessimistic and vitalist philosophy at the same time. “For me, the idea of ​​this ‘vital pessimism’ is closely linked to a certain sense of Jewish humor that I grew up with,” he says, “obviously my work is much more melancholic than, say, that of the Marx brothers or Mel Brooks, but I think it comes from a similar place, between the cynical and the absurd. “

David Foster Wallace said in an interview with Larry McCaffery that cynicism had been a useful tool for American storytellers of the 1950s and 1960s, but that it had ended up enslaving an entire generation of creators. “Postmodern irony and cynicism have become an end in themselves, […] that does not work in the ways of approaching redemption, because to all those jaded ironists they will seem sentimental and naive “, he affirmed in a conversation included in the interview book edited by Pálido Fuego.

In that same sense, Someone who loves you with all your wounds it does not stop simply in producing the cynical laugh: it always inquires into hope. Cynicism, irony and humor are tools, and “any tool can be used for better or for worse,” says Bob-Waksberg.

“I have the impression that we convince ourselves that if we use the right tools skillfully (in language or in life), it is because we are good. But using those tools to win an argument, for example, does not mean that we are right. I think it is good to constantly question ourselves what we are doing with the discursive tools that we have. ”

Hence, his stories militate in discrediting irony to hurt someone, cynicism to look over his shoulder, or humor as an echo chamber of widely normalized violence such as racism or machismo.

His characters try to empathize, put themselves in the shoes of the other, connect. Something for which you need a certain degree of compassion but also courage. “Although it is clear that not all of us need to be equally brave for everything,” he points out. “I have never had to summon the courage to walk alone at night from a subway station to my house. Many things that are easy for me require a lot of courage for people of other genders and races.”

“Life is scary and overwhelms you and it can happen at any moment. And when faced with it you can be a coward or you can be brave, but still, you are going to have to live,” he writes.