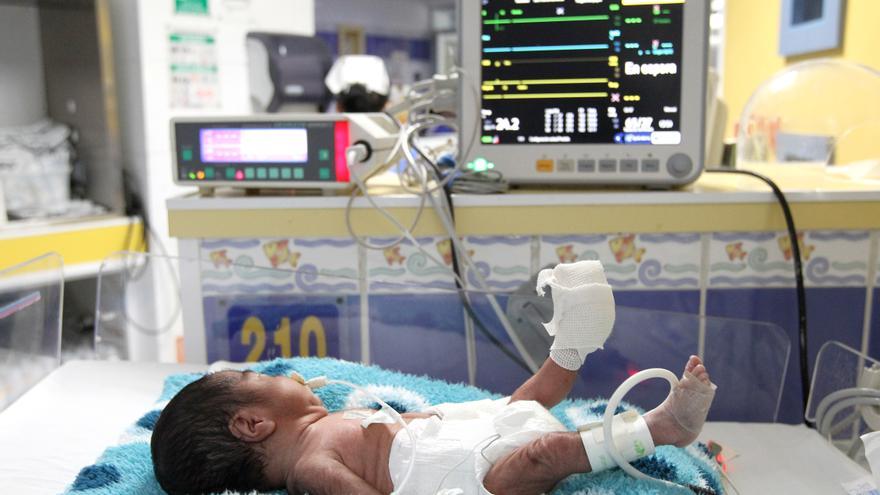 Optimism makes its way after overcoming the fifth wave of infections. The incidence continues to fall, communities abandon restrictions and the risks are decreasing with three out of four people vaccinated in Spain. But amid this encouraging outlook there are redoubts that remind us that the pandemic is still there and that it continues to complicate the day-to-day life of some hospitals at worrying levels.

The Neonatology service of the Hospital del Sureste, in Madrid, has been closed for a month. Normality here has not returned nor is it expected at least until October 1. A spokeswoman for the Madrid Health Service (Sermas) confirms that the reorganization, motivated by the impact of the fifth wave, will then be retracted and alleges that it is part of the center’s “elasticity” plan. The nursing and auxiliary team –18 in total– in charge of ensuring the health of newborns, and attending to them in the event of complications, is intended entirely for the expansion of the Intensive Care Unit, has denounced Workers’ Commissions through a written to the hospital, about which El Salto reported.

The unit has six beds out of six occupied by critically ill coronavirus patients whose admissions can last for months. The 100%. It is a small ICU that collapses at the slightest. Since the beginning of August, coinciding with the peak of the fifth wave, the hospital has kept another “clean” room open for patients who require intensive care for other ailments (heart attacks, complicated operations …). Those five extra beds are cared for by specialists in premature babies. The workers warn that the closure of the unit creates risks if a delivery is complicated.

“I had to run twice to the delivery room, leaving my patients in the ICU. The first time for a baby who was born in detention and we had to resuscitate; the second time it was a child with respiratory problems,” says a nurse from the service who prefers not to give his name. “It is not that it is a stress, it is that it is dangerous. In the end, you leave your patient unattended and poorly care for the newborn,” he adds on the other end of the phone. Attention in the first minutes of a baby’s life is crucial if things are not going well. The neonatal unit, like the emergency unit, responds like a tinderbox.

The Madrid Health Service confirms this way of proceeding. “If during delivery the newborn needed to be cared for by specialized nursing staff, one of these professionals would go to the delivery room expressly for it and, once the baby is stabilized, if his clinical situation requires it, the newborn would be transferred to another maternity, facilitating in these cases the joint referral with his mother to favor the mother-child bond “.

On the other side there are also complaints. The CSIF union delegate has sent a letter to the hospital’s director of nursing, to which elDiario.es has had access, demanding the reopening of the neonatal unit before October 1, as initially planned not only by the ” added stress “that the staff supports, but because of the” additional work “required by this shift of resources to the Intensive Care staff.

“Unfortunately, the care to patients that ICU nurses have been taking has been somewhat diminished unfortunately all this time due to having to dedicate part of each day, not only to teaching again and again the new personnel that have been incorporated, but also because the care is almost doubled, having to take both their patients and those brought by the new staff, out of a sense of responsibility, “says the letter, which asks the center that the COVID staff recruited in an extraordinary way is the one who covers this lack of template.

Children have not stopped being born in the Southeast hospital, although the Madrid Health Service assures that “pregnant women with high-risk pregnancies, such as twins or multiples, who have a close due date are being referred to other maternity hospitals” . Just a year ago, the three delivery rooms of the hospital center were closed to become ICU.

Hospital professionals admit that deliveries have decreased, furthermore, because the population of the area knows the situation and prefers to avoid risks. “There is a forced flight of many pregnant women due to the risk it poses to the baby if there is the minimum complication in the delivery. Obstetricians are also referring all pregnancies in which they appreciate the slightest risk, during follow-up”, abounds Workers Commissions.

In case of setbacks, the newborns are transferred to the Gregorio Marañón, the referral center. Moving a newborn baby – or worse, premature – is a complex task: it requires an adapted ambulance and a regular one for the mother. Of the former, there is only one for the entire Community of Madrid, according to the union.

The attention to the second child that Javier attended, with some breathing problems, “could have been resolved with a few hours in the incubator,” according to the professional. However, it had to be bypassed. “It was quite an important deployment that could have been solved without problems if the incubators and the equipment were in place”, emphasizes the nurse. In its usual state, the unit consists of four rooms with 10 entry points and a room for families.

The Sureste hospital is public but has privatized non-medical services: administration, laundry, meals … It is part of the centers built by the former president of Madrid Esperanza Aguirre with a mixed system according to which companies advanced the money and they built the buildings for an annual canon of public money prolonged for 30 years. This center, located in the town of Arganda del Rey, was distinguished precisely by having a specialist in neonates in all deliveries.

The team is confused because, they say, they do not know where the staff who normally attend to patients just out of the operating room, who occupied the room now called “clean ICU”, are. “He has assigned personnel and we do not know where they have been relocated,” says Javier. The nurse warns of another paradox: “The COVID contracts are occupying pediatric units and we are occupying the ICU. It is all the other way around.”