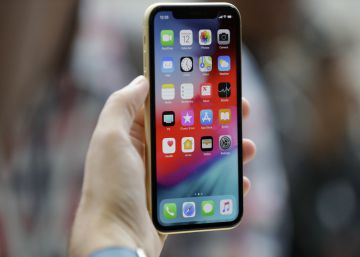 A mobile phone is sold almost three times more expensive than it costs to manufacture it, taking into account the cost of all the components that make up these devices, from the battery or camera to the operating system that allows applications to work.

For example, manufacturing a single Huawei P30 Pro costs about $ 349.40, according to data provided to Efe by the technology consultancy TechInsights, which also points out that its average price in the market, to end customers, is around $ 915. Likewise, manufacturing the iPhone XR costs practically the same, only three dollars less (346,19), while its average price in the market is 899 dollars, always according to the aforementioned consultant, who has disassembled both models - the most promoted At present, by both firms- and has facilitated its calculation on the itemized price of its components.

In any case, the experts consulted warn that the net profit margin of manufacturing a high-end mobile phone may not be so high, because these calculations do not include labor or other indirect costs.

Thus, the World Intellectual Property Organization (WIPO) considers that the average profit margin that these two companies obtain for the manufacture of their high-end mobiles is usually around 40%.

Joining all these parts and making the final assembly of the device, as well as testing the models, costs less than $ 20 in both cases

In its most recent report on intellectual property, which refers to 2017 market data, the profit margin that Apple obtained with the iPhone 7 and Huawei with the P9 model, for example, was 42% in both cases.

As far as the components are concerned, and according to TechInsights calculations, the materials of the Chinese mobile Huawei P30 Pro cost 38.18% of its final price and those of the American iPhone XR 38.50%.

Thus, these are practically identical figures that reveal that, at least as far as the components are concerned, manufacturing a high-end mobile phone costs almost the same to both companies.

The most expensive of the Huawei P30 Pro are the cameras and the parts that enable the image, the differential bet of this model, equipped with a total of four cameras, three rear (40, 20 and 8 megapixels) and a front (32 ), which cost the Chinese manufacturer an average of $ 75.88, according to TechInsights.

For its part, the cameras of the iPhone XR cost around half, although it only has two built-in, the rear and the front. The most expensive component of the California mobile is the application processor, which costs $ 50.42.

Joining all these parts and making the final assembly of the device, as well as testing the models, costs less than $ 20 in both cases, according to TechInsights.

Adding all your models of smartphonesIn the first half of the year alone, Huawei sold around 117.8 million mobiles worldwide, which means that it has sold more than seven devices per second, according to IDC consultancy.

The same source reveals that in the same period between January and June, Apple placed 70.2 million iPhones on the global market, that is, more than four units per second.

Now it is possible to make your movie trip with Moveler, the new app for moviegoers