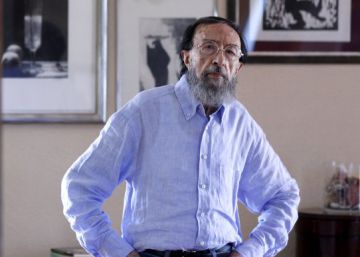 Juan Eduardo Zúñiga He is known, above all, for his story books, his teaching is indisputable. However, his first two works were novels: Total useless Y The coral and the waters, recovered last year by the editorial Chair in a critical edition. The first appeared just one day in the month of February 1951, when, by surprise, the writer took the self-published novel to his lectures at Café Lisboa.

In 1959 The coral and the waters won the magazine's short novel award Cultural accent When it was published in 1962, in Seix Barral, it was ignored by critics, by colleagues and friends. This reaction is only explained by the obsession with the social realism of his peers. The friendship between them did not suppose a literary affinity. The coral and the waters It was "against the flow." His metaphorical realism and symbolic language were difficult to understand and the location in classical Greece reinforced the sense of estrangement. Not even the editor himself understood the work. It took more than a year to publish it and when it did it announced on the cover "stories", contradicting the word novel on the back cover and without prior notice or consent of the author.

There is no doubt that The coral and the waters distanced itself from the predominant aesthetic. However, it is surprising that literary criticism was incapable of valuing it. The proposal of Juan Eduardo Zúñiga in that year, the same of publication of Time of silence Luis Martín Santos, like this novel supposed a way of renewal for literature, a side that deviated from the political and testimonial immediacy of that novel. He proposed a different path, that of metaphorical realism, different from the so-called critical realism, but with a similar objective of experimentation and aesthetic concern. The author did not ignore the difficulty of the text and in the 1962 edition included some pages (not reaching three) justifying. He admitted his enigmatic language and feared that his characters were “as impenetrable as reserved was the time he had described them. Time submerged in silence, time of concealment and stealth, flooded in the suspicion of injustice, in the fear of violence. He also declared his need for expression and communication with others, although speaking was "a punished crime." Therefore, he looked for ways to mask his thoughts and found refuge in the ancient world. Fantasies located in a remote era would not be judged dangerous and thus the truth, seen and heard with horror for years, was hidden behind a mask. This was the genesis of his book. Strange that these statements, so transparent, did not have censorship, but, above all, that they did not serve for an adequate understanding of the text. The exordio disappeared in the 1995 edition.

The symbolism of the title and the novel is revealed in a fragment of the first chapter, where the character Ictio discovers the meaning of the coral, of that twig that later on passing from hand to hand will underline the idea of ​​solidarity. Coral is a symbol of resistance and rebellion, as evidenced by placing the work in its historical-political context. There is a perfect masking of Spanish reality, undertaken from the domain of narrative discourse. Therein lay its heterodoxy.

The power of love, embodied in female sensuality, is a recurring motive in the author's narrative. The protagonist, Paracata, captivates the male characters and shows them a new destiny, very different from those offered by their routine life and their trades. She represents solidarity and provides them with the key to understanding their future. The message is also another reason repeated. It is transmitted by his characters without the assurance that it reaches its recipient, but there is always the intention.

The conclusion of the novel perfectly sums up the writer's thinking. "I have an instinctive faith that young people will save the world and they will be saved," he said in a 1999 interview. The coral and the waters Juan Eduardo Zúñiga conveyed a message of encouragement and future in the sixties. Fear, oppression, ancient thought must be buried. The coral that passed from hand to hand would give them the strength and the decision to pursue a new destiny. The symbolism of the novel tried to instill a spirit of nonconformity and optimism that his contemporaries were unable to decipher.

In those years of misunderstanding, the author took refuge in another of his passions: Russian literature. The impossible affections of Iván Turguéniev (1977) and Pushkin's ring (1983) are two books of essays about favorite writers. Themes and motives of his works recreate them with his particular look. The Russian popular phrase, "The soul of another is a gloomy forest", considered by Zúñiga motto of Turguéniev, has also planned in the Madrid script.

Juan Eduardo Zúñiga is a fundamental writer in the Spanish literature of the 20th and 21st centuries. It has been a precursor in several ways: by practicing a different aesthetic in the postwar era and proposing transgressive issues. Ethics and literary quality have always gone hand in hand in its production. The shadow of this exceptional, heterodox author, like the great ones, will always accompany us.