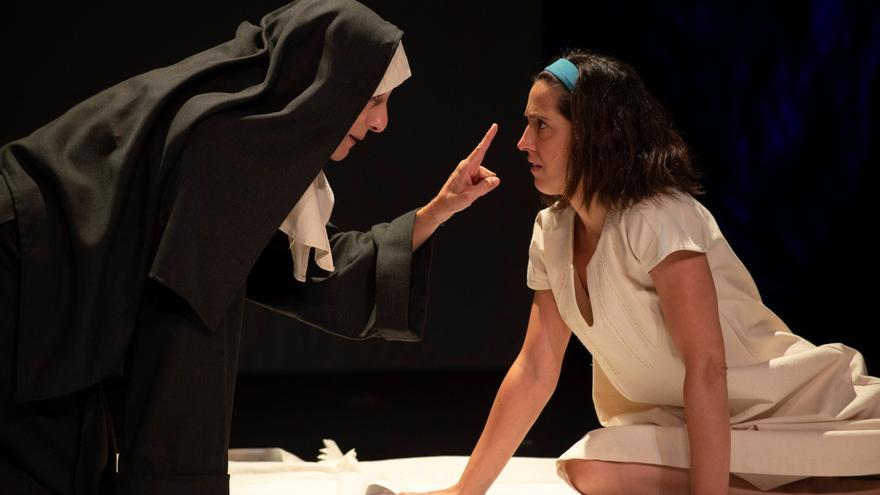 Almagro, Ciudad Real. (EFE) Jul 12. “Francisca” is a cry of denunciation against gender violence, a voice for all those women who have been and are physically and psychologically abused through a heartbreaking text that tells the story of Francisca Pedraza, a native of Alcalá de Henares and first woman who managed to win a lawsuit for separation in 1600 after being mistreated for years by her husband Jerónimo.

The Castilian-La Mancha company, Producciones 099, takes the viewer, with this absolute premiere at the Almagro International Classical Theater Festival and directed by Fredeswinda Gijón, to enter the skin of the protagonists in a work where the story of Francisca de Pedraza joins the testimony of many other women victims of gender violence in a combination of the course of events with a screen projected on the stage that gives voice to them, to the experience, in a demonstration for freedom.

On stage, a simple staging by Nadia Torrijos: a discreet wardrobe, typical of the time, and a simple set: just a table, a book, and occasionally a couple of chairs and two lace cushions of roll; that reflect a minimal detail, a superfluous complement to the work that places importance on the fundamental element: the complaint, the naturalness and the help voices, elements that alternate the plot with the strings of a guitar that Silvia Nogales sings.

The story of “Francisca” takes the events to a town in La Mancha in the middle of the 17th century where a young, curious and innocent girl is forced into marriage, quickly and still being a girl who ends up in the hands of Jerónimo, played by Manuel Moya, a man with the complete profile of an abuser who over the years leads her to a hell of beatings, rapes and emotional abuse in which, Francisca de Pedraza, played by Carolina Lapausa, tirelessly fights to come out and do justice until get, after many attempts, a demand for separation and a restraining order.

Francisca is told by her relatives “more to live and less to dream”, but Francisca is forced to turn her dreams into a mental and emotional refuge where she transforms her reality into sea, waves and life through her imagination to create an escape route. to keep her away from the pain and the blows.

With this work, a heartbreaking and moving text is witnessed before the eyes that creates a line of consciousness among the public for an injustice that four centuries later continues to occur in a society allegedly advanced in values ​​and freedoms, and with which the “Francisca” of Fredeswinda Gijón wants to pay tribute to all the women victims of gender violence in Spain, whose names are reflected on a screen at the end of a play that excites the public and raises them from their seats invading the Municipal Theater of the town of applause that sounds that the fight to end gender violence must continue.