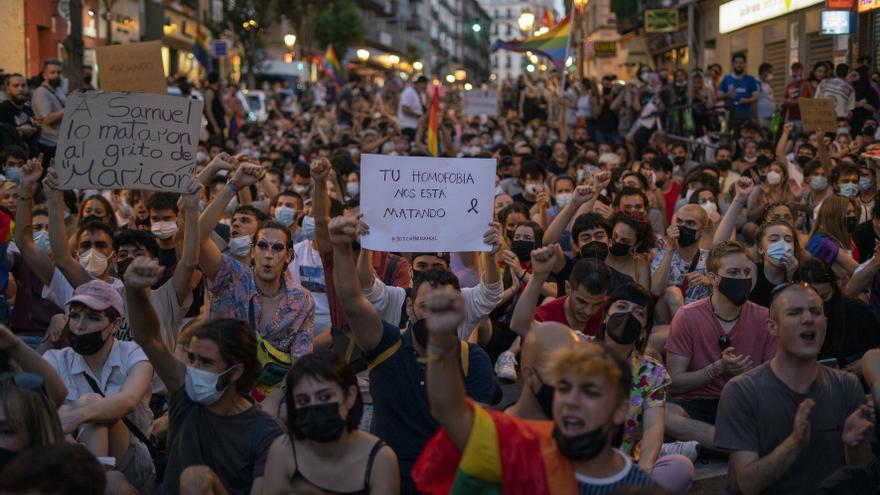 That the rainbow flag bracelet, characteristic of the LGTBI collective, is being worn by “more and more supporters” or that the homophobic insults made against the complainant are heard “repeatedly in heated discussions” regardless of sexual orientation. These are some of the reasons given by the head judge of Court No. 21 of Valencia to rule out that the attack suffered by a bisexual man while riding a motorcycle could be considered a hate crime. The defendants called him “fucking fagot” and even said “we have seen your cocksucking face from the car” or “if you call the police we make you straight as hell. I’ll kill you,” according to the car, which has had access elDiario.es.

The events date back to last February, when Isaac Guijarro was riding his motorcycle through Valencia. According to his account, he was “approached” by two men in a car that was “in parallel” and “approaching a few centimeters” and seeing them make fuss, look at him and move their lips, they came to a red traffic light. At that point they lowered the window and made the insults “understandable.” Guijarro reproached them for “their attempt to run over him” and when asked why, they replied “for a fucking fagot. We have seen your cocksucker’s face from the car.” When they threatened to call the police, they blurted out: “If you call, we will make you straight as hell. I’ll kill you.” During the episode they uttered “dozens of insults” and “stalked” the motorcycle “approaching a few centimeters.” When he saw that he was trying to take a photo, one of them got out of the vehicle and tried to take his mobile, always according to his story.

After the owner of the car gave a statement, who has denied his participation, the magistrate refuses to investigate the facts as a possible hate crime or against moral integrity, as requested by the complainant, and continues the process for a minor crime of threats, that is, , he will only investigate the “I kill you” that they supposedly spat at him. Guijarro, who happens to be the legal director of Olympe Abogados, an office specialized in these cases, has appealed the decision, and is still awaiting the pronouncement of the Prosecutor’s Office. It is the second appeal that you file; It has already done so against the order of initiation, which was in the same line and that the Public Prosecutor also appealed successfully.

The victim considers that the attack occurred because of his sexual orientation and because of how the accused perceived him: he is bisexual “with a feather”, he describes, and among other things, he wore painted nails, long hair and a visible LGTBI bracelet. The judge believes, however, that the facts lack “sufficient entity” to fit well, and uses a series of arguments: regarding the rainbow symbol on the wrist, the magistrate defends that this “does not indicate or identify him sexually” Due to the fact that there are increasingly “more numerous” people who are “sympathetic” to the LGTBI movement. Neither the nails, which “are not a tell-tale sign of sexual condition”, rather “closer” to people called “alternatives”.

Guijarro is defended in the appeal, alluding to the fact that in this type of crime, the selection of the victim is produced “by the social affiliation that links him to a certain group” and elements such as clothing, aesthetics or any type of symbol are ” polarization factors ” that oblige at least the State Security Forces and Bodies to guide the investigation towards the possible hate crime. “It does not have to be, it is simply enough [a los autores] with what [la víctima] get into your stereotype to attack. Wearing painted nails and the LGTBI bracelet enters into the imaginary of an LGTBI person that a person who seeks confrontation with a member of the same may have, “explains the lawyer.

The magistrate also argues that the insults that they uttered (which according to the complaint are “fucking fag”, “cocksucker”, “we’re going to make you hetero to hosts”) are expressions that “unfortunately” are heard “repeatedly in situations of heated discussions , regardless of the sexual condition of the participants in the brawls “. This is one of the most common hate crime myths, but the fact that an insult is more or less common does not imply suppressing the discriminatory motive a priori; rather, the words must be “analyzed in context” and are a “compelling clue” to investigate, according to the experts in this type of case.

That “there is no record that the occupants of the vehicle knew” the complainant, so that “his activism in the LGTBI case is totally unrelated” to the facts is another reasoning that the judicial order uses. Regardless of whether or not he is an activist, it is not a necessary condition that the perpetrator and the victim know each other for there to be a hate crime. In fact, they are those in which the person is chosen for their “connection, sympathy, affiliation, support or belonging” to the group, according to the Ministry of the Interior. That is, it does not even have to be an LGTBI person; but, in addition, it qualifies the department directed by Fernando Grande-Marlaska, it can be a “real or perceived” belonging.

To these arguments is also added another: the magistrate affirms that the expressions “out of place” made were in response to the complainant’s reproach for bringing the vehicle closer to his motorcycle. But Guijarro defends that the events did not occur that way, as he said in the complaint, to which elDiario.es has had access. The man explains that everything begins before reaching the red light, which is when he reproaches them for “they have tried to throw him off the motorcycle” while “he is constantly insulted”. But it is before, in march, when they “try to attack him”; By having the windows closed, he does not know if they were insulting him, but he did see them “look at him and move their mouths,” according to his version.

The magistrate also considers that the insults “were directed at the complainant” and “hatred was not being incited towards the members of the group to which he belongs” because “he was being disrespected on an individual basis” and at no time ” said expressions were shared with the rest of the pedestrians or drivers “. It also uses as a basis several judicial pronouncements, among them, the car with which the Supreme Court filed the complaint against Vox deputy Javier Ortega Smith for saying that the Thirteen Roses “murdered and tortured.” The magistrates considered that they were not words constituting a crime and framed them in freedom of expression.

For his part, Guijarro defends that there has been a crime against moral integrity, contained in article 173 of the criminal law, and another of 510.2, which persecutes those who “injure the dignity of people through actions that involve humiliation, contempt or discredited “for belonging to the group. He considers that there was an intention to “undermine” his moral integrity and dignity, in the open street and voices and in an act of “gratuitous violence” both verbally and physically (“The defendant getting out of the car and facing a few centimeters”) .