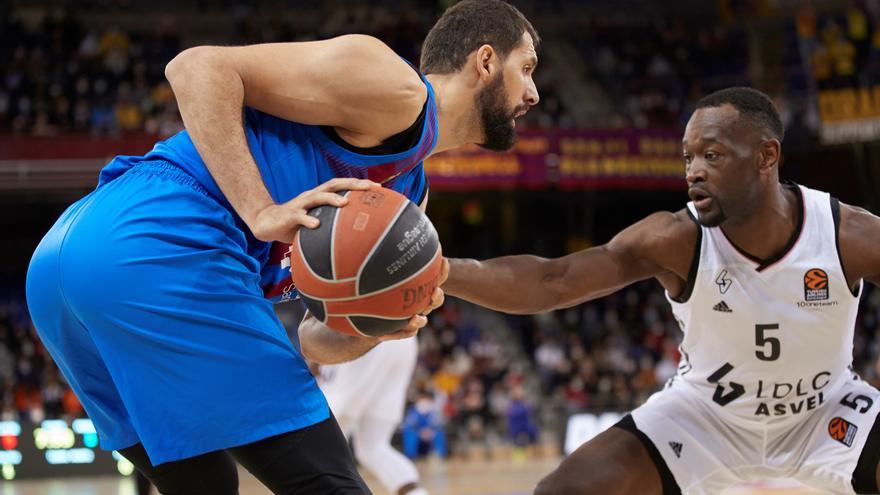 The base Nico Laprovittolawho scored 20 points, and power forward Nikola Miroticwith 16 goals, led the incontestable victory of the Barca at the Palau Blaugrana in front of the Asvel Villeurbanne French (84-71) in a match of the Euroleague from basketball that the pupils of Sarunas Jasikevicius dominated at all times.

Boosted by Sunday's league victory on the court of Real Madridthe Catalan team reversed its losing streak in the Euroleague, with three defeats in the previous four games, thanks to their defensive intensity and rebound dominance (34 to 27).

Given the absence in the inside game of centers Sertac Sanli, positive for covid-19, and Pierre Oriola, injured as well as shooting guard Álex Abrines, the American Brandon Davies (11 points) took a step forward under the hoop.

The Asvel Villeurbanne, who never managed to cut Barça's offensive fluidity and threw in the towel after the break, he had point guard Elie Okobo and center Youssoupha Fall as his top scorers, with 17 and 20 points respectively.

Barça started off strong with five points in a row from Mirotic and as many from Laprovittola (10-2, min.3) that soon forced visiting coach 'TJ' Parker to time out and the French team's timid reaction, fueled by free throws (13-9, min. 7).

Fall's 2.21 meters wreaked havoc in the Barça paint (8 points in the first quarter), with James Nnaji and Davies soon penalized with two fouls, but Barça continued to score smoothly under the direction of Rokas Jokubaitis (7 points ) until closing the period with a partial of 11-4 (28-17).

At the start of the second quarter, the azulgrana box dried Asvel Villeurbanne by denying him the paint (0-6 in triples) and prolonged his escape in the electronic group (39-19, min.15), achieving simple baskets near the hoop.

The Palau Blaugrana noticed the presence at the foot of the track of a special spectator, Manchester City manager Pep Guardiola, and chanted his name, a gesture that was reciprocated by the coach with a greeting.

After the subsection, Okobo assumed stripes in the French team, with two triples in a row and 10 points at halftime, but the Barcelona team kept their concentration until the interval (45-30), which was reached with Mirotic as the top scorer (11 points ).

The exchange of baskets that took place after the restart strengthened Barça's dominance (65-37, min. 25) against an Asvel Villeurbanne who neglected the fight for rebounds and defensive work for the enjoyment of Mirotic and Laprovittola (63-43, min.28).

Despite the difference in the score (68-50 at the end of the third quarter), Jasikevicius tried to correct from the sideline the slightest sign of relaxation in his ranks in a bureaucratic final act that allowed the starters to rest and that the team French made up the score (84-71).

Incidents: Match of the twenty-third day of the Euroleague played at the Palau Blaugrana in Barcelona before 4,466 spectators.