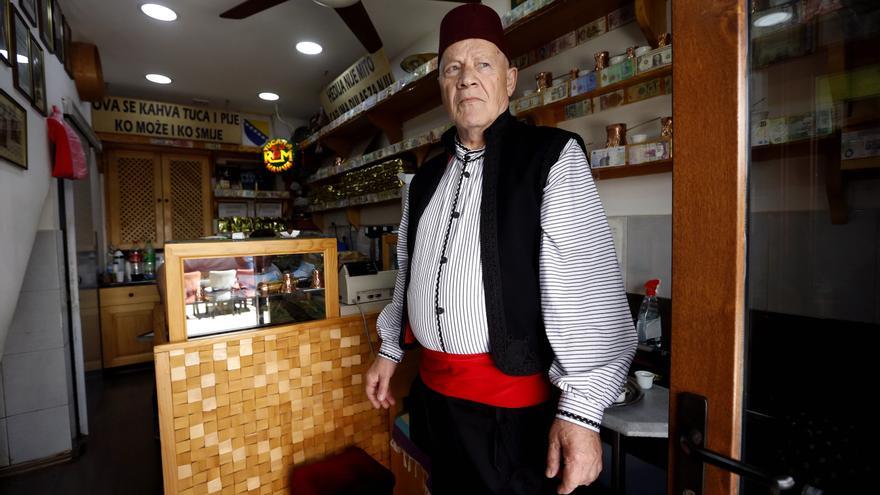 Sarajevo, May 22 (EFE) .- The aromas of coffee come out when grinding roasted beans, the great secret of a perfect cup. And nothing beats the traditional way of doing it with a mortar, little by little, until only a very fine powder remains.

This tradition has been preserved for almost two centuries in Hajrudin Burek’s workshop in Sarajevo, which has become one of the city’s tourist attractions.

The coffee crushed in a large stone mortar, as was done in the 19th century, has an incomparable smell and taste, unlike any other in the city.

The coffee beans are crushed in a mortar that is more than 150 years old, with a steel mallet weighing 13 kilos, built for the workshop in a blacksmith more than a century ago.

“We put roasted coffee in the mortar and grind it. Then we sift it and return what remains to the mortar. An hour and a half of grinding is necessary for approximately seven kilos of coffee,” Burek, 75, tells Efe.

“Raw coffee is chosen with great care. It is then roasted in a special container and left on a wooden tray for 24 hours. This way the moisture evaporates,” explains the process.

“Only then are the beans ready for grinding,” he adds.

Coffee is prepared only with what passes through the finest sieve.

“What is special about this coffee is precisely the fact that it is crushed and that it is not ground coffee,” says Burek, who points out that the custom has survived since the days when there were no coffee grinders and that the of the mortar.

The quality of the bean is of great importance, he explains, noting that he imports a type of coffee from Brazil that is twice as expensive as those found in Sarajevo.

A TRADITION OF ALMOST TWO CENTURIES

Burek works together with her two sons, and hopes that one of her grandchildren will stay in the family business.

The small workshop “Dibek”, which owes its name to the Turkish name for mortar (dibek), is located in Bascarsija, the old town of Sarajevo, built in the 15th century.

The family tradition began in 1851 with a Burek ancestor, Muharem Bekric Muso, who in the Bosnian capital had a cafe well known for its good coffee.

Among the photographs that fill the walls of the workshop, those of Grandfather Muso, dressed in a traditional costume, dominate.

Burek insists on the recommendation of that ancestor of his not to drink water after the coffee he prepares, so that the aroma and the special flavor persist on the palate.

The Yugoslav Nobel Prize for Literature

The Nobel Prize winner for literature Ivo Andric (1892-1975) used to have that mortar coffee when visiting Sarajevo.

Meanwhile, the Burek store is no longer serving coffee. The roasted and ground product is packaged for sale.

A packet of “drak “coffee is one of the most attractive souvenirs for visitors to Sarajevo.

Due to its particular nature, this workshop is almost a mandatory point of visit for politicians, athletes and other personalities as they pass through the Bosnian capital.