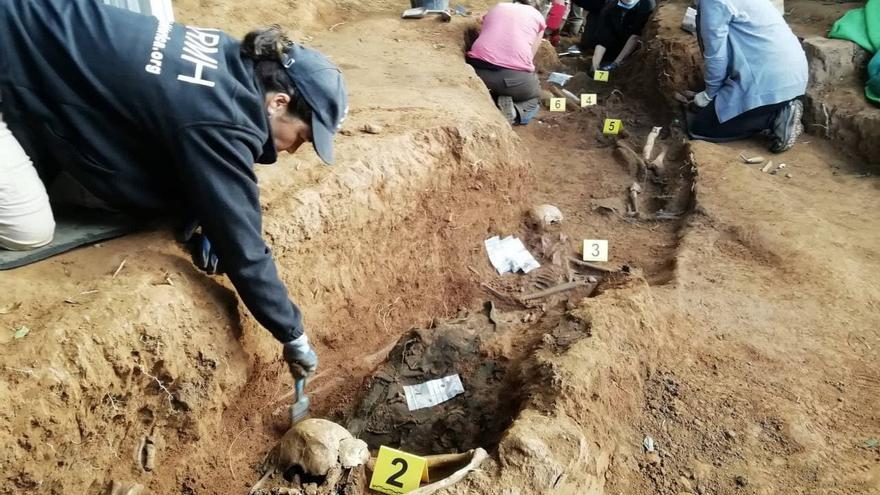 “It’s from my father.” It was the reflex thought of Onelia. He has not been able to avoid it. He listened carefully to David Ramírez, a volunteer for the Association for the Recovery of Historical Memory (ARMH), who listed the objects found in four days of excavations in El Rellán (Grado, Asturias) from the bottom of the pit. Half a comb, shoe and belt buckles, parts of madreñas (the Asturian clog), a coat, nine-millimeter caps along with the remains of twelve bodies. The coup de grace of a brutal Francoist repression campaign carried out in October 1937 against the population of the area. There are no remnants of military clothing. They are not soldiers. The victims of this unbridled massacre, in a decisive locality in the capture of Oviedo and the destruction of the republican army in the north of the country, are people of the town signified by socialism or the labor movements.

The grave is, in reality, a republican trench that the Francoists took advantage of to throw the bodies of those who took their lives (more than 150 in a month) and finish them off in that wound that is barely more than half a meter wide and zigzags through the terrain that operators are discovering. The bodies are piled one on top of the other, face down. David is one step away from the grave with the remains still unexhumed and goes to the relatives who arrived on Friday morning to find answers and the bodies of his parents and grandparents. Onelia has come with the hope of being able to give her father a burial, without being sure that he was in this corner of the farm, next to the Cubia River and on which the gochera in which she grew up and fattened pigs for six still stands. decades. A pig farm over a pit. For David Ramírez it was a premeditated act, a provoked metaphor, the posthumous insult.

David has continued with his explanations to the relatives: “The most striking object of all that we have found is a gold dollar from 1856”. And he has taken it out of the plastic bag in which he keeps other smaller bags where they have been separating the remains found that can identify the murdered. There are about forty relatives around the excavation. Luisa, Sabino, Carmen, Concepción, Mercedes, Feliciana, as well as Onelia, among many others. They are sitting on the edge of the ditch, in some scissor chairs that the mayor of Grado, José Luis Trabanco (IU) has brought, while the volunteers excavate. They watch as spectators of their own history. Mercedes came over on Thursday, looked under the awnings and met the workers at work: “Let’s see if you can get my dad out of there,” she told them.

A golden dollar in a moat hidden by a farm. Between the pigs and the corpses there was hardly a heap of sand. Pepe Sierra, former mayor of Grado, shared his thoughts with Onelia when he listened to David. “It belongs to Rafael,” Sierra said to himself. Thanks to him, the memory of these lands has emerged, which Mayor Trabanco bought, in December 2018, for almost 65,000 euros. A historic gesture that has freed this field from infamy. Sierra has been in charge of taking care of the archives of the consistory and the oral accounts of the last survivors, and has founded an association that receives the name of Carlos Barrero, the last mayor of the Republic in this town, shot two weeks after the coup de State committed by Franco.

Sierra has identified most of those killed and thrown into the ditch. Some of them went to Cuba, but only Rafael, Onelia’s father, was in Tampa (Florida) from where he must have brought the gold dollar. David adds that the coin has a solder point. “He had to wear it as a pendant or in a ring,” he explains to this newspaper.

His name was Rafael Huerta Miranda and he was shot on October 13, 1937. He had turned 50 and was recognized for his eloquence in speaking, his kindness and respect. He was not yet thirty and emigrated, like so many other Asturians, to America in search of an opportunity. At the end of the century the chronicles recall the 35-day voyages on the French steamer “El Corduan”. The chronicle of the journey written by another migrant, José González, is very eloquent: “It was the worst and most tormenting thing that God released into the world. I still believe that an individual who had committed half a dozen crimes, the best punishment was to send him in that steam to Argentina “, he wrote in 1899, on his trip to America when he was 15 years old.

When Rafael Huerta returned to Asturias twenty years later, he continued with his farming tasks and joined socialism and gave rallies in the area. “He had to keep that dollar as a souvenir,” Sierra tells this newspaper, which has Huerta’s life perfectly dated. Onelia was three years old when her father was killed. The family memory is indelible, like that of the rest of those who have approached the Rellán this morning: Rafael received a notification from the Civil Guard to report to the barracks. His wife insisted that he not attend to the claim, but he went there against Onelia’s mother, whom he had met on his return. They never saw him again.

The revolted soldiers arrested the neighbors, young and old. They were first interrogated and tortured in Patallo’s chalet, which is kept at the entrance to Grado. A chilling presence, where all the stories of the families are lost. This is the case of Rafael, but also of Sabino’s father. He is 89 years old and shows his pain: “What happened here was uncontrolled fascism, killing left and right.” He is 89 years old and hopes to find his father, who was “guarded” (in hiding) until they threatened to kill his three children if he did not turn himself in. He was five years old when they took him to the chalet.

He also saw his grandfather murdered. He took a nap when a troop of 200 or 300 Falangists crossed Grado. The neighbor, dressed in his blue shirt, came out to say hello and blame Sabino’s family. Those reds had to be thrown out, remember what he said. They first beat him and then shot him three times in the back of the house. “They are things that cannot be forgotten,” he says. He has a very good memory, he remembers the white spot on the mare of the son of the accusing neighbor the day he died suddenly, a year after the events. “When the father learned the news, he was struck down,” he says.

Nor is she willing to forget Concepción Sánchez. He thinks he has his grandfather in the grave. His grandmother came down to see Patallo every day. And one day it was gone. He had three more siblings, ages 15, 17 and 18, “and the mother went to open the door one day and found the bodies of the three, they killed them and left them at the door.” She says that neither her mother nor her grandmother spoke of this, but she insisted. “If my mother were still alive she would come to dig with both hands. There is no right. Appear or not appear, I do not forget or forgive,” he says.

Carmen Álvarez is 86 years old and wants to be here when her father is taken out. “I just want my father’s bones to put together with my mother’s, I’m going to die right away,” he explains. Near where the grave now opens there was once a place where the young people of El Rellán went to dance. Carmen remembers how her mother forbade her sister to go there to have fun: “You will not dance on your father’s body,” she told her. The members of the ARMH estimate that there must be about thirty bodies under the farm that the Principality of Asturias has not demolished. As a result of negligence, they will have to stop the excavation and exhumation until the building is demolished. They believe this will take another year. The team is “very disappointed” with the performance of the Minister of the Presidency of the Principality, Rita Camblor. He promised a year ago and on the ground an investment of 150,000 euros to demolish the pig farm.

A year later, he is still standing and the recovery of the bodies and the repair of the memory of his relatives will have to wait for Counselor Camblor to complete her tasks. A month ago, when the association came to remove the bodies of the victims and they had to postpone it due to the rains, Luisa, 95, asked for a bone from her father. “I am satisfied with that,” he told the CTXT camera. Today he arrived from the first, around eleven o’clock, he has taken a seat and has followed the process without taking his eyes off the work of the 14 workers. Marco González, vice president of the ARMH, addresses Luisa and the rest to send a message of hope: “I hope we can find the remains of your relatives and give them back to you so that you can bury them.”