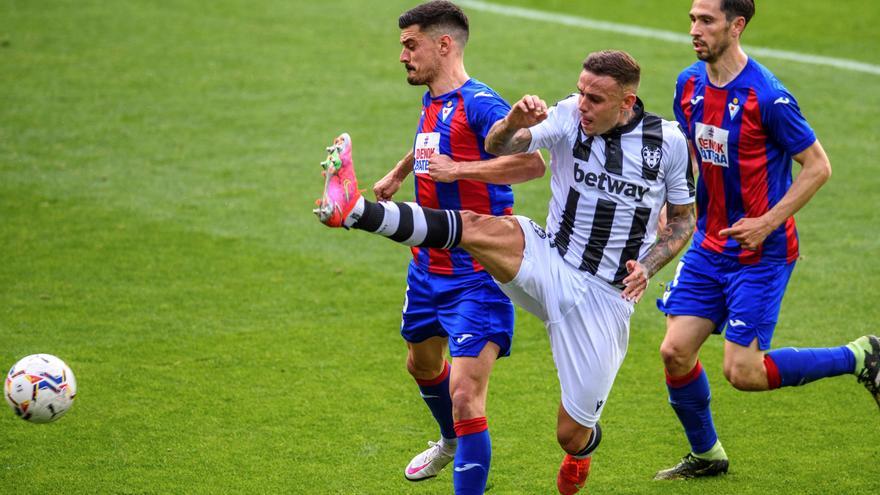 A lonely goal by De Frutos gave this Saturday in Ipurua the victory at Levante by 0-1 and leaves Eibar as bottom and with an increasingly difficult situation to be able to save the category. The game started with bad news the last minute injury during warm-up of Marko Dmitrovic, who had to be replaced by Yoel.

Things for him Eibar They were already going uphill before the first minute, since this terrible novelty joined the very important loss of their most decisive player Bryan Gil.

The first arrival was for the I raised with a Clerc launch that did not find a spiker.

Eibar began to press in the Levantine area in search of the failure of the visiting team, but in the first minutes the game did not have a clear dominator.

The two teams were looking for holes for the attackBut both defenses were tough and tough in the innings, which caused the injury of Radoja, who in the 17th minute had to be replaced by Malsa.

Little football and chances in this first leg of the game. In the 23rd minute Roger tried to surprise Yoel by seeing him overtake, but his shot went too far from the goal. No chance on braided plays in the first 25 minutes.

Eibar began to stretch and in minute 27 Enrich fought a ball from the ground and after recovering it, he shot on goal, but the well-directed ball hit Postigo, thus marking the first chance for the locals.

Shortly after, Cote, who was being the best of the game, in an individual play, hit a run from area to area, which ended with a center that did not find a finisher. Eibar’s second warning. The third a minute later was a long-range strike from Arbilla, which went slightly off the track.

Eibar did not finish clearing a goal, but at least in defense they held Levante well, which hardly created danger. In the final stretch, Inui recovered a ball and inside the area threw the death pass that was blocked by the Levante defense.

The reply came with a ruling from Sergio Álvarez that ended up on Morales’ legs, who crossed without anyone taking advantage of the good assignment.

When it seemed that he was going to the break with a tie to zero goals, Clerc took a cross by taking advantage of a defense error, which De Frutos finished off the nets in an unappealable way, thus overtaking Levante in the last minute.

One more time Eibar had to row against the current, in the most difficult still to overcome the 0-1 in 45 minutes. Inui proved it with a long shot in the 52nd minute that Aitor Fernández saved without problems.

The reply came with a shot from Dani Gómez, who came out high and Kike García did not want to be less and immediately did not think about it to launch a new shot that did not reach greater.

Eibar tried, although with more desire than success. Pozo made a worthy individual move, which after a cut ended with a good shot, which went over the goal.

The gunsmiths wanted to energize the game and bring concern to a Levante, which was defending itself without problems. The local players were boxing Levante within their area, but their attacks were not dangerous.

In the 64th minute, a well-directed shot from Malsa hit Arbilla, which diverted him to a corner on the clearest occasion so far for Levante.

Pozo, the best of the second half, in minute 68 returned to test Aitor with a low left foot and very well placed to the left post of the Levantine goalkeeper.

Mendilibar introduced more dynamite on the field in the 74th minute, with the entry of Quique González from Valladolid, in search of the tying goal, but Levante was comfortable in defense, playing with everything in their favor, including the scoreboard.

In the 88th minute, Kike García finished off a good ball, which was narrowly missed on the clearest occasion for Eibar, in what was the last option for the locals, who could not find a way to pierce the goal of a Levante neat, but he didn’t have to do much to get the three points either.

The corner kick featured the desperate addition of goalkeeper Yoel, but it was not even possible. In this way, Levante takes some air and Eibar is left alone in the last position and will have to make a great effort in the eight games that remain in order to save the category.

Referee: The collegiate Xavier Estrada (Catalan Committee). Warnings: He admonished Diop in the 13th minute, who will miss the next game due to accumulation of cards, in the 16th to Clerc, in the 37th to Postigo, in the 59th to Aleix García and in the 64th to Arbilla. Goals: 0-1. M. 45 + 2. Of Fruits.