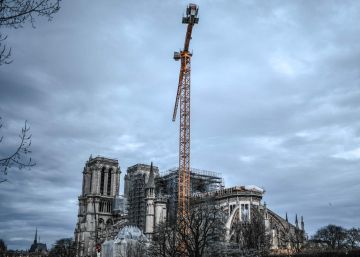 Notre Dame changes the profile of Paris again. A gigantic 75-meter crane has been erected next to the cathedral with a task that is both urgent, delicate and risky: finally disassemble the heavy scaffolding that was placed for needle repairs before fire that extensively destroyed the gothic jewel of the French capital on April 15 and that, since then, it seriously threatens the damaged infrastructure of the temple.

Work to secure the remains of the cathedral resumed this Thursday, two days after the first Christmas in more than two centuries without a mass of the Rooster being celebrated in the Parisian temple, something that had not happened since the French Revolution. Removing the 250 tons of partially molten scaffolding on the ship during the fire is one of the most delicate tasks in this phase, still preserving the structures prior to the start of the reconstruction of the cathedral, for which the French president, Emmanuel Macron, It has established a term of five years but that is not expected since it begins before 2021.

There are more than 10,000 deformed tubes, welded by fire and also covered by lead that melted massively during the fire, the newspaper recalls Le parisien. “We don’t know how this will affect the stability of the structure ”, said a spokeswoman for the diocese of Paris, according to Reuters.

The gigantic yellow crane, which Le parisien He has already baptized as “the new needle” of Notre Dame – the original, built in the 19th century by Eugène Viollet-le-Duc and which was surrounded by the scaffolding now damaged, was one of the main victims of the fire, which also destroyed a good part of the deck of the central nave— was transported in pieces in mid-December in a convoy of more than 40 trucks. With a load capacity of up to 8 tons, the crane must allow the removal, one by one, of all the parts of the old scaffolding. In parallel, a new, lighter and taller one is being erected, from which the workers will be able to disassemble the old structure. The work is expected to begin in February, although everything will depend on the weather: as the France Presse Agency recalls, it requires a dry climate and not too cold to perform these jobs, something difficult in the first months of the year in a often wet and cold Paris.

At the moment, the cathedral is still completely surrounded by a wall that separates the work of tourists who continue to gather in its surroundings. Large photographs installed along the walls show the tasks of recovery and restoration of the treasures and sculptures rescued from the fire. According to AFP, the interior of the cathedral has already been completely emptied by robots and the recovered elements have been inventoried, classified and placed in special warehouses erected in the main courtyard of the cathedral. This should be partially reopened at the end of January, after months of delay due to Lead cleaning tasks performed to remove any toxic trace of the surface.

Tags: be, Cathedral, crane, devastate, disassemble, eight, fire, giant, I will give me, month, Parisian, priority, save, scaffolding, to damage