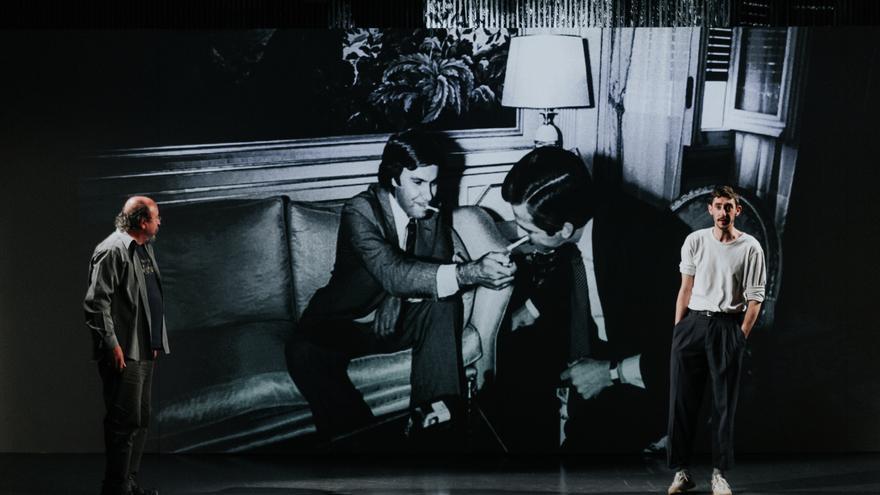 Two children stop playing when they hear gunshots on the radio, a theater company returns to their village listening to rumors on the air and three men, without knowing it, defend the legitimacy of the democratic state while the shadow of one of them grows in the silence. Adolfo Suárez, President of the Government, held his breath before the shots of the coup attempt, what happened, what he thought, is reconstructed in 23F – Anatomy of an instant, the new play based on the novel by Javier Cercas that the Cuyás Theater opens this weekend.

Alex Rigola, one of the most prestigious theater directors in the country, was the boy who stopped the ball in the patio of his house. From then on, he was in charge of orchestrating this production with a single indication from the writer Cercas: «Stick to what we know, don’t speculate». «This is a very special piece for us because it tells one of the most important parts of the history of modern Spain. This essay, although Cercas has always defended it as a novel, is a lesson since there is no other text written about this interesting period, without speculation or fiction», details the playwright. Friendship, power, duty, subordination, reconciliation and betrayal, so many nuances that the bullets were forged.

A daring set design for a historical event

In front of them, colored pajamas light up the stage. Some balloons, scattered, insinuate the celebration of a party, that of democracy! The 40th anniversary of the assault on the Congress of Deputies brings together the four characters who act as minstrels recounting what happened and represented by the Catalan actor Pep Cruz, together with Miranda Gas, Eudald Font and Roser Vilajosana, who narrate what happened, while the figure of a king who remains silent watches them. What is it that defines the public when it leaves the room? Surprise, say those responsible, from the youngest to the adults, surprise, because that was the experience! Surprise, too, for not knowing what was known.

The crisis, terrorism and a rudderless government were the perfect breeding ground for the recklessness and fine-tuning of the military. This is evidenced by the voices that intermingle in the scenic space both in the role of observers and interveners. «As the script was being written, we were discussing it, arguing and rehearsing it at the same time, so that it consisted of an organic work», describes Pep Cruz about the creation process, who remembers that February 1981 looking for a bar with the colleagues with whom he was rehearsing Peer Gynt while the streets of Gerona remained silent.

His imposing figure, with whom he will embody Antonio Tejero, collides in the physical space with that of Suárez, played by Vilajosana, «I wanted for this role the youngest and smallest person among the totems, giving a symbolic effect between the characters that they confront each other”, explains the theater director, highlighting the surprising rise of Suárez. Who started his political career from the shadows to become «the representative of democracy».

To those who did not hide under the bench

Together with Adolfo Suárez, of Falangist affiliation, General Gutiérrez Mellado, a Francoist military man, and Santiago Carrillo, Secretary General of the PCE, stood against the coup plotters. «A paradox of our country», exclaims Pep Cruz, «three people from anti-democratic backgrounds came to defend her».

A game of mirrors shows the miseries and opportunities of contradictory characters with their origins and reasons for belonging to democracy. “I still like every time I go back to rehearsals or performances those moments of love and heartbreak in friendship, that grow, end, and in which there are also betrayals,” says Rigola. In this unease, and beyond the images that TVE never broadcast live, but which are still preserved as a common memory, the controversies that have led to the publication of declassified files have been clarifying the legend.

In an anecdote, the late and beloved writer Almudena Grandes She commented that, knowing what was happening, this novel, now a play, kept her on edge until the end. «We were always sold that the king had been the savior of democracy, but he did a series of very reckless acts that were the aftermath of the coup, as Cercas himself says. He reacted, but it was more for his own interest than for that of the country, as has been seen with the amount of wealth accumulated in all this time”, observes Àlex Rigola. On the opposite side of memory, the iconic image of Adolfo Suárez sitting on the bench has been saved.

The myth of the transition

Rigola describes the Transition as a “heroic” period, which had its “hero of resignation” in Suárez, who, instead of persisting, withdrew. Your mission now: transform the agora of the theater into an expression of memory. “We tend to forget, so it is important to remember to get back to knowing where we are and knowing what we are allowing.”

However, actor Pep Cruz unambiguously defines it as “an old fascism that is entrenched in the most powerful areas of power.” The experience of the years has led him to identify the period of 1978 as a “bandage placed on a wound that left all the pus inside” that has now resulted in the rise of the extreme right and political troubles. 23F – Anatomy of an instant will be on Friday and Saturday, at 7:30 p.m., between 12 and 23 euros.