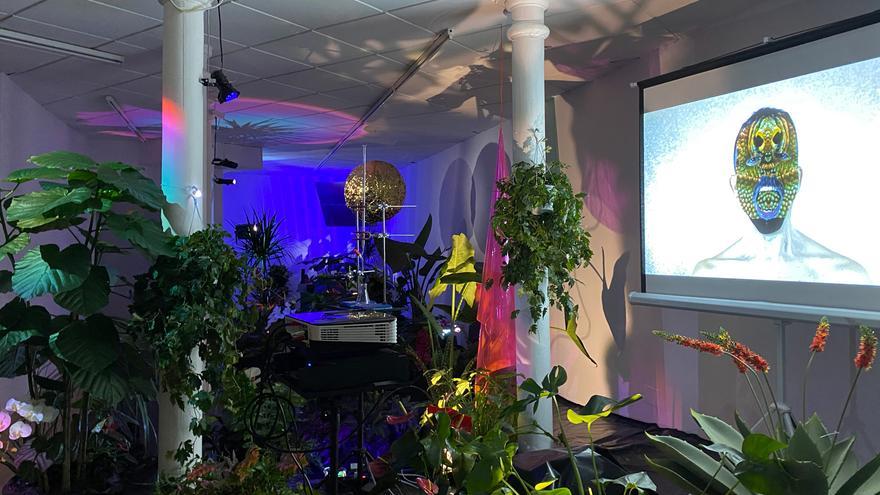 Going down the stairs of the Swinton Gallery in Madrid is to enter a tropical garden with an enveloping atmosphere. Between lush plants there are screens and projections of hybrid beings that constantly mutate, repeat themselves and transform into combinations of others. It might seem that in the videos the images are cloned to infinity, some equal to each other, but Andrés Senra, artist, philosopher, biologist and researcher in aesthetics and art theory, proposes the opposite: equal repetition is not possible. For that he names entropy, a concept coined in the 19th century by physics that measures the degree of molecular disorder of systems.

Between exotic flowers and a mountain of earth, a photographic laboratory appears to remind the visitor that photography supposes the disappearance of the original by repeating and repeating the copies. In the history of art it has been questioned after that an original and a copy really existed. Andrés Senra goes further and suggests that one copy will never be the same as another, because on the one hand, the materials where an image is projected are never the same, and on the other, the image itself deteriorates.

A projector microscope with a laser spot magnifies a drop of liquid from a test tube. In it there is saliva and stagnant water and the projection shows on a screen the movement of the microorganisms that inhabit it. With this Senra wants to reflect on how the idea that we are a unit is fictitious, and recalls that unicellular organisms that make life possible inhabit the body itself, and how then human beings are the result of complex interspecies relationships.

The microscope and the test tubes are surrounded by ultraviolet light, which in nature is a natural source of mutations. The artist winks at the fact that mutations and recombination of molecules are the source of biological diversity.

The first trans-species beings appeared in the 70s, when groups called Elf Queen's Daughters and The Silver Elves they published in some American magazines that they felt they were elves, fairies or aliens, and they had many followers. Two decades later, in the incipient internet of the 90s, a forum emerged that brought together people who declared themselves "non-human animals", and they began to name themselves otherkin or therianthropes. Already in the 2000s the concept of transspecies appeared, beings that state that their identity is totally or partially non-human. They feel that they are an animal trapped in a person's body. They consider that they have been pathologized, and they speak of neurodivergence: there is a norm that dictates what mental health is and they are dissidents of that norm.

With this phenomenon as an excuse, Andrés Senra presents in his new exhibition a possible fictitious speculation in which some beings establish self-care alliances with nature, with other animals and with the rest of the beings on the planet, through hybridizations, genetic transformations, or surgery.

Transparaiso it is a metaphor for breaking down the binary categories of gender and the idea that the body determines identity. Senra, like other artists, researchers and activists, argues that there is a unique identity and that this is the same throughout the biological history of a person.

His project is based on the idea of ​​identity as something fluid and that can be chosen, and encourages us to think how the subjectivity of a person is not determined, but is a combination of cultural, political, social and also material factors, including the body in which you are born. But none of these factors is determining and, therefore, subjectivity can be modified.

It will be part of the idea of ​​will and free will, and the possibility of making political and personal decisions to choose who one is or change who one is using all the technology available today. He suggests that all this will only be possible by creating alliances of care and desire with other human and non-human beings.

Philosopher Donna Haraway, author of The Cyborg manifesto, and a reference to understand contemporary feminism, technoscience, or science fiction, has studied the relationships between humans and non-humans, from cyborgs to companion animals. In his latest work, Stick with the problem. Generate kinship in the Chthuluceno, Haraway proposes to rethink the relationships of humans with the Earth and all the other species that inhabit it. In this science fiction essay, the new children that would be born would gradually cease to be human, as they contained in their genetic structure a part of some animal that would be their totemic animal, and with which they would establish an alliance of care. Being that animal a little physically or feeling like that animal would make the human take care of it and prevent its extinction.

Along these lines, the scientist and thinker Lynn Margullis argues that all terrestrial species are linked by symbiotic and interdependent relationships. Symbiosis would be at the origin of life on Earth in all its forms and would be a basic mechanism of evolution.

This idea that only collaboration between species makes life possible is present in Andrés Senra's work. With his artistic proposal, he questions the norm that establishes the supremacy of the human species above all others, and also the norm that privileges cis heterosexual people.

An idea runs through the entire exhibition: life is not the repetition of the same thing. This questions the idea of ​​normativity: of canons in art history, on the one hand, and of the canons of the gender norm, on the other.

Science argued in the 20th century that life was information, something that robotics did as well. A fictitious parallelism was established between the genetic code and the binary code 01: life was the information encoded in DNA molecules, and information appeared as the great paradigm of the universe. Andrés Senra affirms that this is a reductionist vision that simplifies the complexity of life. He explains that pretending that information is always repeated in the same way is an attempt to impose that things are always the same, and links his criticism to the questioning of gender that trans people do, and to the questioning of human supremacy that people uncover transspecies.

Various artists frame their work in questioning the binary division of genders and interspecies relationships. The creator Pablo Durango lives split between himself and his avatar Onyx, a transdimensional entity of fluid gender and extrasensory capacities. Durango understands identity as a process that moves away from a traditional binary logic and investigates new modes of production of subjectivities queer contemporaries that blur the border between the human and the non-human.

¥ € $ Si_Perse it is the avatar of two beings living in Barcelona who, without gender or species labels, make speculative science fiction and urban fantasy. They argue that identity is fiction, and therefore it is possible to explore the entire spectrum of the existing imaginary and fluctuate outside the ideas of masculinity and femininity.

Influenced by Genesis P-Orridge, they appropriate the DJ space to introduce ideology into the culture of the night. Scared off by the celebrations of gay pride, and watching the new right take over the resistance strategies of anti-capitalism, they wondered what would happen if they did. queer it will appropriate the codes and instruments of fascism. The result is a mixtape in which the hymns of Mónica Naranjo, Gloria Gaynor or Lady Gaga, are transformed into a declaration of war against the enemy

Also in Barcelona, ​​Quimera Rosa is a nomadic laboratory that, since 2008, has been working with the body, identity and technosciences from a transhacker-feminist perspective. With their Transplant project they propose a hybridization with the vegetal. Five years ago they practiced an intravenous injection of chlorophyll in a human body and from there they have developed biomedical research for the treatment of the papilloma virus and in parallel a future newspaper as a fictional part of the project.

Transparaíso is part of Andrés Senra's residence in the artistic space Interior Beauty Salon, located in the borough of the Bronx of New York. As part of that residency, Senra has been producing since last May a series of videos that are part of the installation that can be seen in Madrid. Starting in January 2022, Senra will be in New York with a public call for people who want to contribute with videos that address trans issues, LGTBIQ +, ecosexuality, veganism, animalism, magic, trans-species or interspecies relationships.