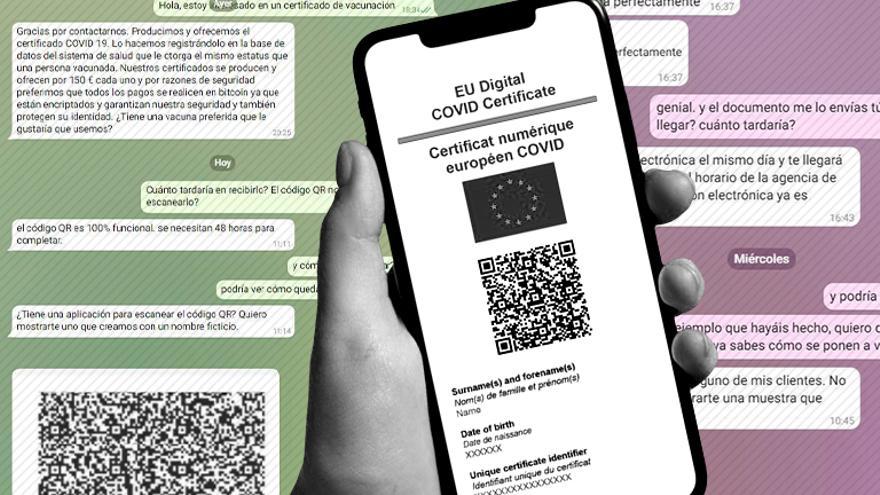 Agents of the National Police have dismantled the Spanish branch of an organization that provided false COVID passports in different countries of the European Union. Seven people have been arrested –six in Madrid and one in the province of Barcelona– for the alleged crimes of document falsification and against public health, after having verified so far the fraudulent registration of some 1,600 people in the National Vaccination Registry, According to police sources in a statement.

In the course of the investigation, it was detected that the criminal organization, on the one hand, would have captured health personnel who entered those who required false certifications into the registry. In addition, investigations continue into the possible theft of access codes to it, codes with which they also registered unvaccinated people so that they could record the complete vaccination schedule and obtain the documentation they needed.

Those arrested advertised themselves on instant messaging applications taking advantage of denialist-themed groups in which they offered both false PCR tests and forged COVID passports. The operation, which is still open, has allowed the detection and identification of the leaders of the criminal organization that operated from France, whose data has already been brought to the attention of the country's authorities.

They advertised themselves in denial-themed groups

The investigation began in early January when ads offering both fake PCR tests and forged COVID passports were spotted in denialist groups on an instant messaging app. The agents were able to verify that members of criminal groups or their intermediaries entered these groups to guarantee a "health pass" to people who were not vaccinated.

In this way they found out that the payment they demanded in exchange for the fraudulent certifications was 50 euros, in the case of issuing negative PCR test certificates, and amounts that ranged between 200 and 1,000 euros in exchange for issuing COVID passports in which contain two or three doses of vaccination. In addition, the researchers were able to verify that, in most cases, the members of the organization demanded payment in cryptocurrencies, through accounts that they had opened in third countries to make tracking by the authorities more complicated.

Once those involved received the payment, the interested parties obtained the QR code that contained the fraudulent vaccination schedule. After two days they could obtain the COVID passport in which two or three doses were recorded as having been received.

The investigations carried out have made it possible to detect that the organization had created two types of patronage networks, one that was charged around 200 euros so that they could obtain the fraudulent document, and another, with greater purchasing power, which was required to payment of 1000 euros for entering them in the registry with the complete vaccination schedule.

After identifying the intermediaries in Spain of the criminal network, an operation was carried out that allowed the arrest of all of them, as well as the identification of the leaders of the organization. The investigation remains open and new arrests are not ruled out. The 1,600 people who have acquired the fraudulent evidence have been subject to investigation.