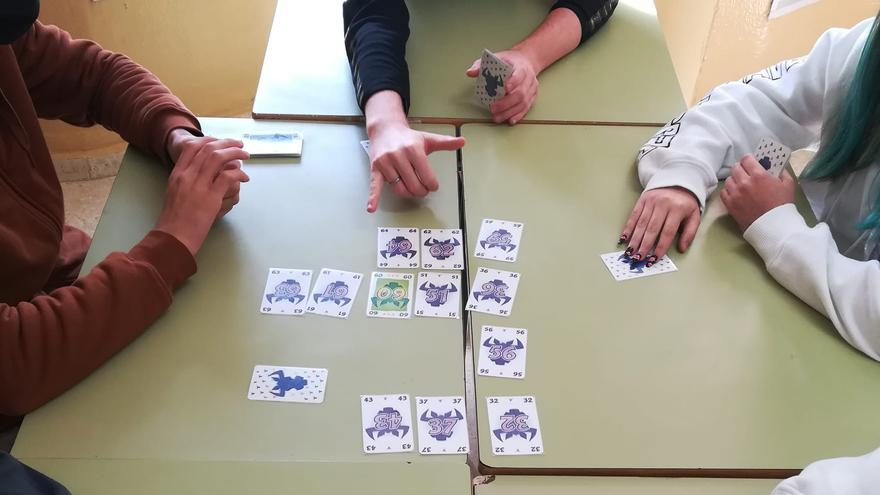 Nobody got rid of the matter, although the numbers were hidden under the letters of Take 6!, a game consisting of placing the cards in rows based on the lowest number on the table. The player who places the sixth lowest card will take the previous five; losing the one that accumulates the most points.

Most of the twenty students did not know what the game was about but, within a few minutes, the most skilled began to develop their strategy and to handle the cards that chance had placed in their hands. The objective to get rid of the cards and not have to take any.

The teacher Oscar Alexis Monzón Alejandro he kept an eye on his students. “They love that there are recreational activities in the classroom but with the coronavirus issue they have had to limit this year,” replied the teacher, convinced that board games promote healthy competition among students and improve group coexistence, although adolescents have already lost the practice of having fun with this type of entertainment, which they have replaced by computers and tablets, where, on the other hand, many play with their friends although at a distance.

“With the attitude they have towards the game, you recognize if a student is very competitive, if he has stress, if he is capable of losing, the academic level he has,” Monzón said about the clues that recreational games offer when analyzing your student body.

The student Nayeli Sánchez Díaz, 14, was the only schoolgirl who publicly acknowledged that she played this type of game as a family and that during confinement due to the coronavirus pandemic it was a fun formula to spend a lot of time together. “With my parents and my brothers we play monopoly, cards, Parcheesi from time to time; I don’t like to be playing with the computer, ”said the young woman, who wants to be a psychologist in the future and is sure that seeing her opponent’s movements and eyes will help her to detect which foot her patients are limping on.

The project comes hand in hand with the Ludens Association, formed a year ago by teachers and social educators, and has the endorsement of the association of parents of the center (Ampa) and the Department of Education of the Cabildo de Gran Canaria, which has allocated this school year an item of 200,000 euros so that the Ampas do extracurricular activities. ‘Use of board games in the classroom to improve coexistence and social skills’ is one of the projects that has been approved, and to verify what it consisted of, the consejera Olaia Morán He went to the IES Poeta Tomás Morales to see how the kids were having fun, although he did not dare to play a game with them

The person in charge of the project and prPresident of the Ludens Association, Pablo del Pino, explained that with board games transversal skills are worked and young people develop social skills such as cooperation, group work and cohesion. “We are based on ABJ (Game Based Learning) methodology, an educational stream that works with the school curriculum but also improves other skills that promote social cohesion through play; so to speak that the boys make pineapple while they have fun ”. Learning that takes place very often in Primary, when children are young, but that is nevertheless forgotten as they grow older.

Del Pino added that these types of games have ceased to be part of family entertainment and have been replaced by computers and tablets, which, although they allow online play with more players, is played individually and without seeing the opponent, so ” there is no relationship between them ”. “With traditional board games we make them go out of their comfort zone and force them to pay attention to the movements made by the opponent,” added the teacher, which helps to get to know each other. Something essential to create team in the classroom and reduce tensions.

From the association, which has laminated the cards to be able to clean them without problems and avoid any contagion of the coronavirus, they do not fear that this type of practice will contribute to promoting gambling among young people. “On the contrary, we fight against it, teaching them playful games without risks,” said its president, who assures that there are hundreds of board games in the current market for adolescents to have fun with each other or as a family.