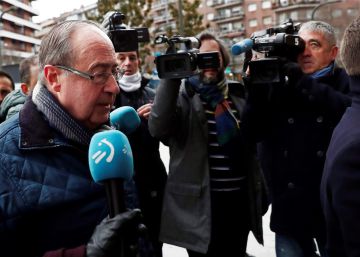 Ángel Vizcay, manager of Osasuna for 24 years (1990-2014), charged along with 10 other people in the call Osasuna case for crimes of misappropriation, corporate, false business document, falsification of annual accounts and sports corruption, said Tuesday, on the second day of the oral trial held at the Pamplona Hearing, that his former club paid premiums to players Getafe and Betis to let Osasuna win in games of the 2012-13 season and 2013-14 to continue in the First Division. The Navarrese club, however, descended on May 18, 2014, despite beating at El Sadar al Betis (2-1), which was already evicted from previous days, in that meeting indicated by Vizcay.

According to Vizcay’s statement, which ratified the ones he had done in the previous proceedings and in a courtroom ordered by the investigating judge, with which he was president Miguel Archanco, he himself was responsible for paying 400,000 euros in cash to the then player of Betis Antonio Amaya, during a meeting held in Madrid, so that the Andalusian team did not win that match at El Sadar on May 18, 2014, last day in the First Division. The former president Archanco denied in his subsequent statement that these payments had occurred, although he acknowledged the existence of premiums to third parties to avoid the sporting descent of the Osasuna Athletic Club. The rest of the accused, who have not yet declared, are also separated from the statements of Vizcay, who remained throughout the day without interacting with the other defendants.

Archanco defended himself against the accusations of the former club manager. Ángel Vizcay revealed his truths about the threats allegedly made in those two seasons of 2012-13 and 2013-14. The first campaign – in which they ended up descending to Second Mallorca, Deportivo and Zaragoza – “150,000 euros were paid to Valladolid to win Deportivo (1-0 on day 35), and another 150,000 euros to Betis to win to Celtic (1-0 on that same date). Both Celta and Deportivo were close qualifying rivals and those who played against them prevailed, “he said. In addition,” there are another 400,000 euros given to Getafe to not win in Pamplona. “That meeting ended 1-0 in favor of Osasuna against the Madrid team, also that day 35. The Navarrese club was saved that season from the descent at the end of the 16th place, with 39 points, Mallorca, with 36, Deportivo with 35 and Zaragoza with 34 lost the category.

The former manager of Osasuna continued advancing in his statement. The delicate situation of Osasuna, which remained a season later, led to “the club paying 400,000 euros to Betis to win against Valladolid (4-3 on the penultimate day) and another 250,000 euros also to Betis to be allowed to win before Osasuna (the aforementioned 2-1 in the final day). He also agreed to pay another 250,000 euros to tie against Espanyol (1-1 on the penultimate day). ” That season Osasuna descended with 39 points, Valladolid with 36 and Betis with 25. Despite the supposed size, the Navarrese club did not avoid falling to Second.

In Vizcay’s words, “the Board of Directors also discussed what procedures to carry out and decided to do that. There were all the managers. ” The approach to the Betis footballers came, in the words of the former club manager, in a meeting held in Madrid by Vizcay himself and the manager Jesús Peralta, with the then Betis players Antonio Amaya and Xabier Torres, who also sit on the bench, but they have not yet declared. The players, Vizcay says, “asked for a million euros, but we told them that we could not reach that figure.” The board of directors “agreed that Jesús Peralta would make the arrangements”, but that Vizcay himself accompanied him, because “there was some discomfort in some managers because of the efforts Peralta had done the previous year,” according to Vizcay. Previously, the amount did not reach its destination. “I gave the money to Antonio Amaya,” said the former manager.

To make the payment of the match between Betis – which was already down – and Valladolid, before the clash of El Sadar against the Sevillians, which closed the season, Osasuna needed 400,000 euros he did not have. “It is said then that there is no money and that it is necessary to pay it. Finally, among several people of the club we put the amount. 60,000 euros I put them, 60,000 euros the director of the Foundation – Diego Maquirriain -, 60,000 euros Peralta, and the rest the the sponsor of ours, who was Lacturale, “says Vizcay, who implied to the board chaired by Archanco:” All those money destinations were discussed and decided at the Osasuna Board. “

During the trial, the prosecutor said that the real estate agents Albert Nolla and Cristina Valencia, also accused in the case, signed a receipt for 900,000 euros, “a document manufactured to justify the exit of money from Osasuna.” On this particular, Vizcay no he got wet: “I understand that yes, but I didn’t participate in that accounting.”

Vizcay also said that he decided to denounce the matchmaking by knowing that LaLiga was already on the track: “Thebes [Javier, el presidente] He didn’t promise me anything, he told me that he would do everything possible because Osasuna didn’t have any sanctions.

Then he declared the former president of Osasuna, who denied everything. Have you participated in any match-fixing? “Do not. I have not participated in any adjustment, ”he said. But “the board wondered if there would be any possibility of proposing a bonus to Betis players to win against Valladolid. Mr. Vizcay was asked what he thought about that. ” According to Archanco, he agreed. The prosecutor told him that, despite everything, Osasuna descended from the category: “Sometimes you have to take a series of risks to keep it. It’s like signing someone in the winter market. ”

The former president, who did not want to answer the questions of the lawyer of Vizcay, nor those of LaLiga, inquired: “That Mr. Vizcay says where he got that money to pay Espanyol and Betis. I signed 400,000 euros to give priority to Betis. I told Vizcay that not one more euro. ” Allegedly, in premiums to third parties for whose efforts, according to Archanco, “Mr. Vizcay lends himself directly, who said he took over. They tell us that you have to go down to Seville to take the money, because Betis players say they want it before coming to Pamplona. ”