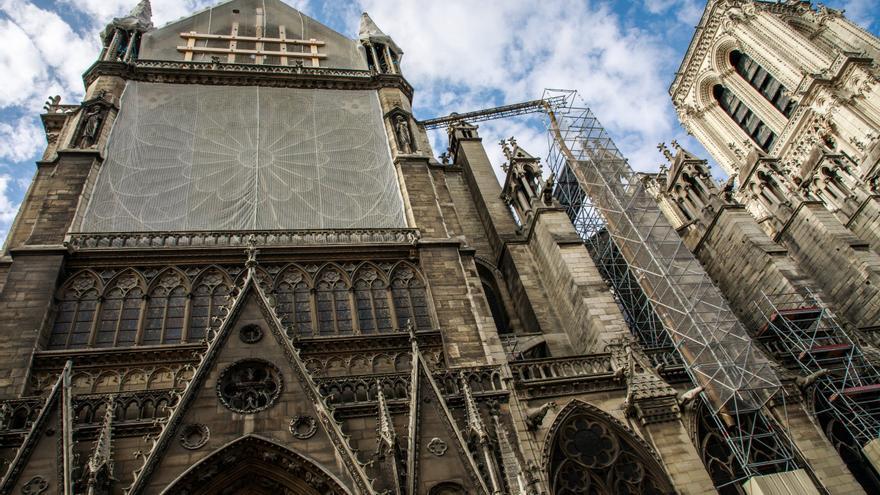 Paris, Apr 10 (EFE) .- A few days after the second anniversary of the Notre Dame de Paris fire, those responsible for its reconstruction today organized a virtual visit in which they could see the forest of scaffolding that surrounds the walls to consolidate the structure before rebuilding begins.

General Jean-Louis Georgelin, who is responsible for coordinating the works, explained in the transmission broadcast by social networks that, according to its programming, the restoration itself "has to start in the second half of 2021."

"Now," he stressed, "my concern is to achieve rigorous planning to set our path for reopening to worship in 2024."

It will also be in 2024, although everything is not finished, when tourist visits to one of the most emblematic buildings of the French capital can be resumed, whose history was marked by the fire that was declared on the afternoon of April 15, 2019 in the roof, in an area where renovations were being carried out.

THE VISIBLE TRACES OF THE SINISTER

The traces of the sinking of the cathedral spire in the transept, which was the most spectacular and tragic moment of the incident, are still well perceptible, particularly on the ground that, as Georgelin showed, "was totally destroyed" in that area.

There it was necessary to remove all the vestiges that had collapsed, in the first place with robots because the entry of people was dangerous due to the risk of landslides.

One of the most delicate tasks in this phase was to dismantle the scaffolding that surrounded the needle, a total of 300 tons of metal parts that were extracted with articulated cranes and with specialists in work at height. That ended at the end of 2020.

Efforts are now continuing to consolidate the vaults and in parallel - the general pointed out - a thousand oaks have been selected in a forest in western France that will be used to remake the roof under the spire.

A LEAD POWDER THAT IMPREGATES EVERYTHING

The fire melted the lead plates on the roof, which volatilized an extremely polluting dust that partly precipitated on the building itself and that not only required special techniques to be used to extract it from the walls and paintings, but also slowed down the process. job.

In the protocols for this reconstruction, which is intended to be exemplary from the point of view of occupational safety, it has been established that every time you enter and leave the premises you have to shower to get rid of that lead dust that permeates everything.

Amélie Strack, a specialist in sculpture and stone restoration, who is currently in charge of cleaning the Chapel of Our Lady of Guadalupe, told how they started with a mechanical vacuum cleaner before using laser pencils for the joints and for polychromies and products that do not contain abrasive elements.

"Each work is unique. You have to reflect on the procedure," says Strack.

The great organ was one of the elements that was saved from the fire, but its 8,000 pipes had to be disassembled and removed from the cathedral, for which four containers and a trailer were necessary.

Uruguayan Mario d'Amico takes care of that, and reassembling them, who emphasized that an organ "is delicate like a violin" and that to handle these tin tubes you have to wear gloves because they are very delicate.

Tags: during, forest, give to me, Notre, plays, scaffolding, walls, wraps up