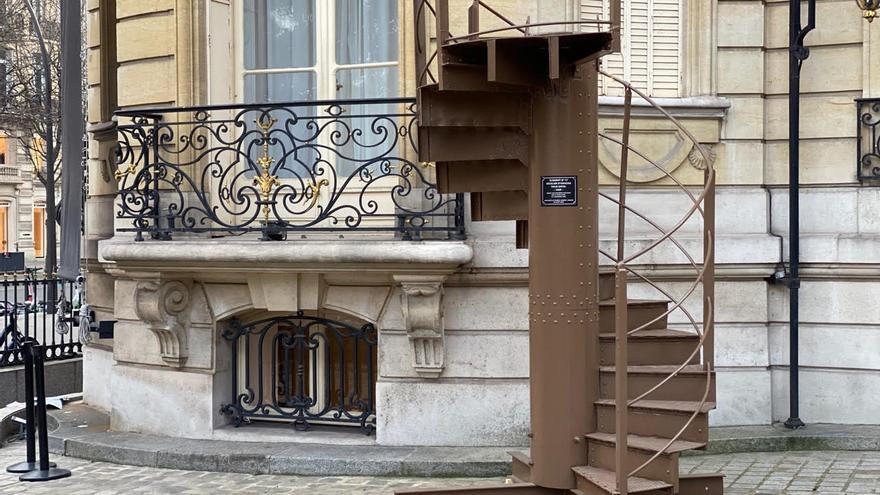 It measures 2.6 meters, weighs a ton and has been awarded for 274,475 euros at an auction in Paris held this afternoon. It is a section of the original spiral staircase of the Eiffel Tower, built in 1889 and that linked the second and third floors of the monument. In 1983, just 100 years after its inauguration, the staircase was replaced by an elevator and disassembled into 24 pieces. Wrought iron steps that are, today, scattered around the world. ‘A unique and emblematic piece’. According to Artcurial, the Parisian auction house that organized the event and which had estimated a starting price of between 30,000 and 40,000 euros.

Of the 24 portions of the staircase spread around the world, one is on display on the first floor of the Eiffel Tower, three were donated to French museums – the Musée d’Orsay (Paris), the City of Science and Industry (La Villette) and the Museum of the History of Iron (Nancy) – and the other 20 were sold to individuals and collectors at an auction that took place at the Eiffel Tower on December 1, 1983, the same year the elevator was installed. “It was a historic sale,” explains Cécile Tajan, a specialist in the Art Deco department of Artcurial, to elDiario.es. “This section, number 17, was bought that day by a Canadian, the owner who has now decided to sell it.”

Transported by ship, truck and crane from Canada, this 14-step segment has been exhibited in the front yard of Artcurial, on the Champs-Elysées, in the days leading up to the auction, drawing the attention of those who walk through the center of Paris. Many may be curious and come to observe the unique piece. “I couldn’t help it,” explains Joseph, who has interrupted his journey to the subway. “It is fascinating to be in front of a piece of history.” This is the fourth time that Artcurial has auctioned the Eiffel steps: they had previously awarded other sections for 220,000 euros (2013), 523,800 euros (2016) and 176,150 euros (2018).

The auction has been broadcast live and for all audiences through the Artcurial website, along with other objects and works of art. “Many clients have made an appointment to ask us how to integrate the ladder at home”, says Cécile Tajan. Indeed, one of the advantages of the staircase is that it has a traditional height and “can be easily installed indoors with the help of an architect.” According to Tajan, the buyer’s profile is an international client, passionate about Paris and modern architecture: “There are collectors who expose the staircase as an element of the history of architecture and there are individuals who decide to integrate it into their homes.”

After 37 years in a private collection in Canada, the seventeenth flight of the staircase designed by Gustave Eiffel will become part of a European collection. The expectation generated by the auction is equal to the fascination generated by the work Eiffel, an indisputable symbol of French culture and a source of inspiration for great artists and writers of the last century. “The fact that these steps are spread over the United States, Japan or Latin America shows that the Eiffel Tower and Paris continue to inspire the world” reflects Tajan. “It is moving that the French heritage continues to shine abroad,” he concludes.