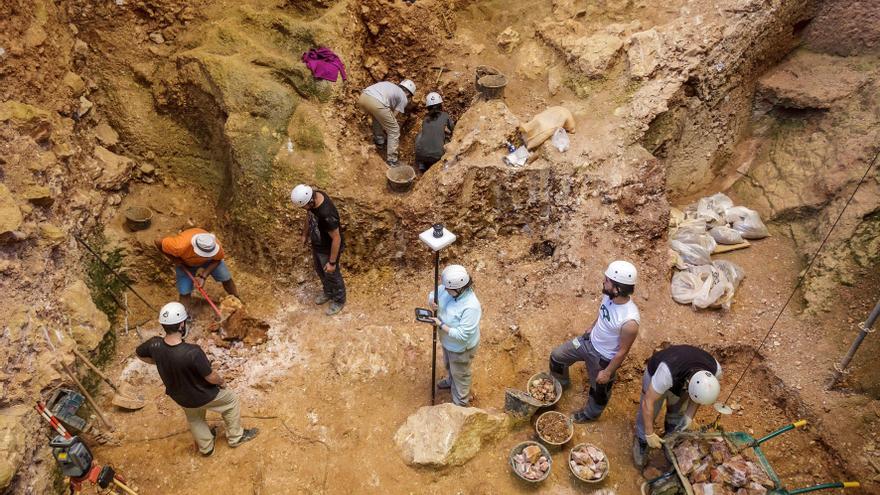 A small flake of quartz recovered at level 7 of Sima del Elefante during the annual excavation campaign that has been developed this month in the Sierra de Atapuerca The chronology of the arrival to this place of the first European populations advances, which goes back to 1.4 million years, a period with little evidence of human occupation in Europe.

This, together with the discovery of the lithic industry at the TD8 level of Gran Dolina 700,000 years ago, supports the continued human presence in the Sierra during the last 1.4 million years, something exceptional in the continent, as highlighted this Monday the directors of the deposits in a press conference.

In 2008 at the Sima del Elefante site a jaw fragment dating to 1.3 million years was recovered, which is the oldest human bone remnant documented in the Sierra de Atapuerca and which was cataloged as Homo sp, that is, indeterminate, and more recently, in 2013, a small lithic tool dated around 1.4 million was discovered. years.

On the other hand, also at level 7 of the Elephant Pit, they have recovered skeletal remains of different taxa, among which those of suido and turtle predominate, which reinforce the interpretation that the Atapuerca Research Team had previously raised, according to which the environmental conditions of the place more than a million years ago were more temperate and humid than at present .

Remains of species that inhabited Europe 900,000 years ago

In the TD4 unit of Gran Dolina, numerous skeletal remains of species that inhabited Europe 900,000 years ago have been found, as is the case of a hip and jaw of a rhinoceros of the species Stephanorhinus etruscus in an extraordinary state of conservation, which matches and fits with the rhinoceros skull that was recovered in 1991, when the project management was still in charge of Professor Emiliano Aguirre.

In addition, a neogene flint flake has been recovered in this same unit, accompanying a good representation of fossils of bears, large bovids, horses and deer that shows that 900,000 years ago they were used to living among large animals.

Regarding the TD8 level of Gran Dolina, whose intervention began last season and which made it possible to fill a gap of human evidence in Europe dating back 700,000 years, it has been possible to expand the collection of tools, as well as the remains of fauna that will allow in a future study the time and environment of the Sierra de Atapuerca.

In Cueva Fantasma, there is a great appearance of lithic industry that has been registered in comparison with previous campaigns, among them several scrapers of excellent workmanship, a flint flake with marks of use of around 70,000 years.

Regarding the fauna, they have compiled a large number of bones, in the form of large accumulations, the horse being the best represented species, with remains belonging to all parts of the skeleton, as well as parts of a deer and a large bovid.

In Galería, the typical Acheulean industry -bifaces-, which continues to appear in the rich unit GIIIa, with 260,000 years old, where more than 1,500 remains have been found that facilitate knowing the full operation of the cavity as a place to obtain resources meat by the human groups of the Middle Pleistocene of the Sierra de Atapuerca, that is, pre-Neanderthals.

The variety of raw materials used, from Neogene and Cretaceous flint to sandstones and quartzites and consists of small flakes and large retouched instruments.

In the cave of El Mirador, the findings made continue to provide relevant information on the importance of livestock practices and the culture of the first pastoral and agricultural communities that colonized these lands during the Neolithic.

It has been possible to document combustion episodes dating back to about 6,000 years, related to the burning the manure of the herds that were kept in the cave, a practice aimed at reducing the volume of waste and eliminating parasites.

Remains of fetuses and neonates of sheep and goats have also been found recovered in this area, which, together with the high presence of progesterone detected in the manure through analytical chemistry studies, suggests that it was the place where they were kept. the females during the final phase of gestation and the young with their mothers in the first days of life.

In another sector of the cavity, about 6,700 years old, numerous remains of material culture have been obtained, being the case of various ornaments, among which pendants made with perforated deer canines stand out, and new fragments of marble bangles, that are added to those recovered during the 2019 campaign.

These are rare remains, especially bracelets since this type of marble ornaments are located in Andalusia and Levante and it is probably a prestigious item that arrived in Burgos through exchange networks.

In this 2021 edition, a total of 180 people have participated who have worked in the different sites open so far in the Sierra de Atapuerca, practically recovering the normal rhythm of excavations before the pandemic.