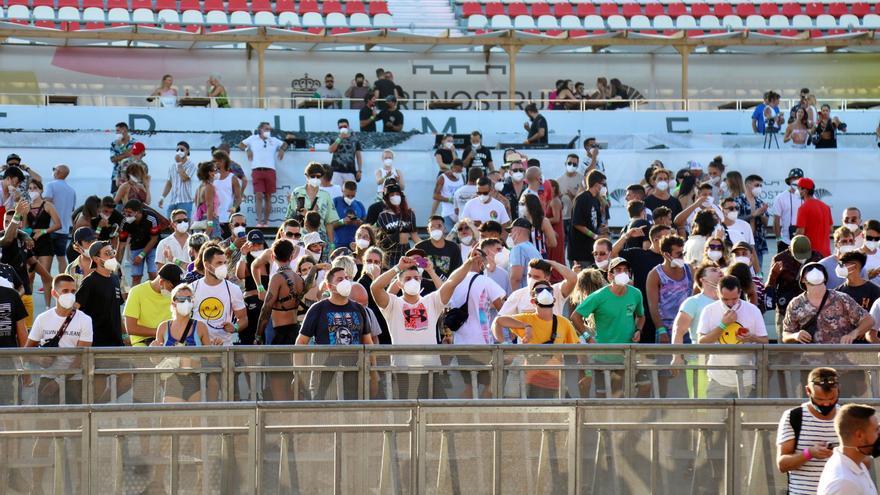 Fuengirola, Jul 25 (EFE) .- A festival, the “Castlepark” in “Marenostrum” Fuengirola (Málaga); two separate areas for dancing, with a mask but without social distance; and some 2,000 attendees willing to give their all, gathered this Sunday in the first large-format concert in Andalusia that allowed the public to stand.

Fifty percent of the attendees were foreigners or from other provinces, the concert promoter, Jason Lima, has confirmed to Efe that he has been satisfied with what he considers a “dress rehearsal” for the future.

At five o’clock in the afternoon the doors of the venue were opened and the first attendees began to arrive – negative test in hand – to enjoy the electronic music meeting in which the muscovite disco and singer Nina Kraviz started as headliner .

Completing the picture of this mass concert dress rehearsal, the Madrid-based DJ Héctor Oaks and the Alicante-born Paco Guillén, who predicted a “return to the more electronic scene” on social media when referring to this event.

THE FIRST TEST, IN THE MORNING

The activity around the festival began early in the morning with the performance of the first antigen tests for the staff and early risers, such is the case of Lidia Ramírez and Gabriela Richarte.

Lidia and Gabriela wanted to avoid crowds and last minute surprises, so they went to one of the field hospitals, located less than a kilometer from the enclosure, shortly before 10:30 in the morning.

Upon arrival, they showed their entry, provided their data, took the test and after the rigorous fifteen minutes, they collected the result with which -because it was negative- they were given a mask and a bracelet associated with one of the two bubble areas in which they could move freely, although without removing the mask.

At the exit they proudly showed their bracelets and were pleased with what they found to be “a great initiative” as it conveyed “tranquility and confidence to find themselves in” a safe environment “.

A hundred people, including health workers, hostesses and security, made up the device responsible for the antigen test that was open until nine at night and with that to attend to the furthest behind.

By the time the concert began, 1,726 tests had been carried out and only 33 were positive; The relevant health protocol was applied to the latter, which included, among others, the refund of the amount of their entry, they explained to Efe from the organization.

Most of the users did not complain to take a test that some of them had already done before, and many “were delighted” despite being “a little scared,” the head of the health team, Paqui Muñoz, told Efe .

“It is not a question of whether or not this type of event should take place, but rather how it should be done,” explained Rodrigo Romero, the First Deputy Mayor and Councilor for Culture of the Fuengirola City Council.

For Romero “there is a way to do things well, safely and with guarantee” and this concert has been the result of “such a fantastic experience” of the last edition of “Marenostrum” and of a year of work where the objective has been look for “the best way” to develop this type of event.

The mayor of the branch considers that with the protocol implemented on this occasion, which aims to minimize the risk of contagion and guarantee maximum security, the problems associated with holding large-format concerts arising from the pandemic are solved.