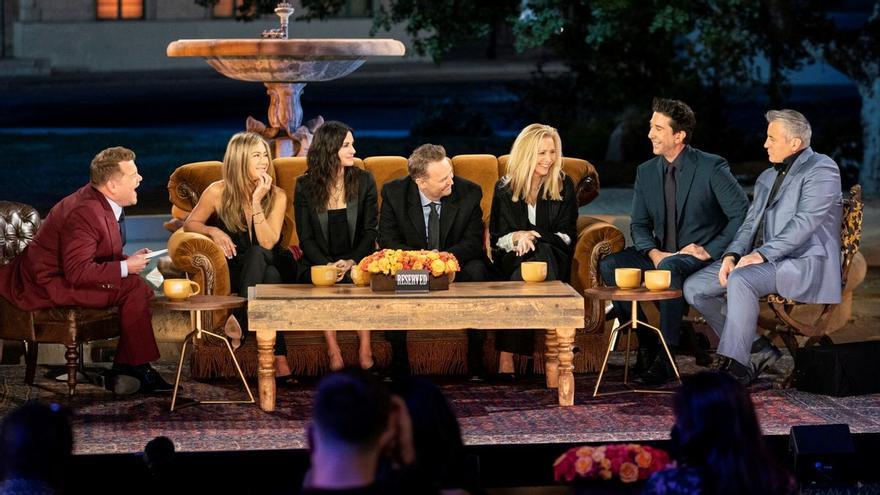 Many fans would like it that way (others, more purists, maybe not), but the fact is that no, ‘Friends’ does not return, not at least in the form of a true revival. What can be seen from Thursday on HBO is a television special of 103 minutes in which all its main actors are back together in the same room by, apparently, only second time since the end of the mythical ‘sitcom’ in 2004.

It’s not just any room: a good part of ‘Friends: The reunion’ takes place on the same set where the original series was filmed, Stage 24 in the studio of Warner Bros. in Burbank (California). We return to tread the mythical settings of the series, in the best company, seventeen years after the door of apartment 20 was closed for the last time.

The first to arrive is David schwimmer, better known as the paleontologist Ross Geller, and with him we see the first watery eyes, which will not be the last. Whether it’s true emotion or acting talent, the cast of the series brings us a festival of nostalgic tears. Jennifer Aniston, aka Rachel, asks for the box of tissues as soon as she meets her colleagues. Courteney cox, aka Monica, does not know how to contain the emotional overflow. Matt LeBlancaka Joey, he seems the most laid back. Matthew perry, aka Chandler, the most absent.

A talk in front of the fountain

The special is divided into two great parallel plots: on the one hand, there is that emotional visit to the old set, where friends revisit old moments from work or fiction, in addition to reading mythical parts of episodes; and on the other, the talk moderated by the off-road ‘showman’ James corden in front of the same source that appeared in the opening credits, which is not in New York but in the aforementioned Warner Bros studios. Among the public, some mythical faces, such as Elliott Gould and Christine Pickles, Ross’s parents in fiction.

During the trip curious stories are remembered, such as the almost reckless bet of the creators for a Jennifer Aniston then simultaneously involved in a series for CBS (if it were to become a full season, three episodes of ‘Friends’ would have had to be shot for the second time ), or LeBlanc’s accident during the filming of ‘In which nobody is ready’: jump on the favorite sofa and dislocated shoulder. There are also curious insecurities: apparently, neither Lisa Kudrow, aka Phoebe, nor LeBlanc are too fond of seeing themselves on a screen and have not yet seen certain seasons.

To all this we must add small testimonial clips of the most diverse celebrities. You could expect the presence of Reese witherspoon, who appeared in season six as Rachel’s little sister. More unexpected (although ubiquitous), the South Korean pop group BTS, which heads a block on ‘Friends’ fans from around the world and the power of television to solve emotional deficiencies. There is even the Nobel Peace Prize Malala Yousafza, a declared fan (of course) of the episode ‘The routine’, the one with Ross and Monica’s fabulous high school choreography.

There are also heartfelt testimonies from David Beckham (“I’m like Monica, a cleaning freak”) or Kit harington (“I’m from the Geller family, neurotic to the core”) and a quirky fashion show featuring Cara Delevingne and other more unexpected guests.

‘Friends: the reunion’ started as a promotional stunt for the launch in the United States, in May 2020, of HBO Max, the platform that exclusively hosts the series (and in which our HBO will soon become). It still has scents of infomercials, but at least it’s a high-end one that keeps up with the pace and parade of surprises (some still cannot be revealed) throughout.

For a fictional continuation we can wait seated. The creators, David Crane and Marta KauffmanThey have said it on numerous occasions: ‘Friends’ is a series about that moment in life when your friends are your family. And at the end of this story, they all had promising relationships or offspring to care for, that is, real families. To follow the story, it would be necessary to load many congratulations, something that no one involved in ‘Friends’ considers even for a moment.