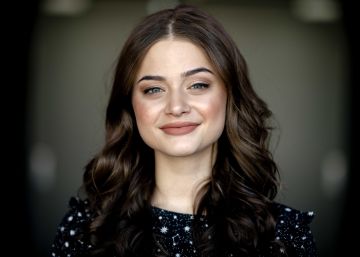 The Eurovision festival This year promises to be a special triple appointment, at least, for the Netherlands. They are not only the organizers of the 65th edition, after Duncan Laurence's victory in 2019, with the song Arcadian. In addition to Jeangu Macrooy, the official representative this time, there will be another local voice, although on behalf of Greece. His name is Stefania Liberakakis, 17, born in Utrecht and of Hellenic origin, who will sing Supergirl A tune pop. In a similar situation is his colleague Annna (with three enes), artistic name of Anna Madara Perkone, of Latvian descent and resident in Amsterdam. He hopes to win on February 8 the final of the preliminary phase of Latvia, to then defend said position. Will interpret Polyester, a critique of the impact of the textile industry on the environment. Blas Cantó, the Spanish artist, unveiled its composition, Universe, on January 30 on the RTVE website.

The festival does not impose limitations on the nationality of the performers, and hence, for example, that a still unknown Céline Dion will represent Switzerland in 1988, despite being Canadian. This year it will be held on May 12 and 14 (semifinals) and 16 (the final) at the Ahoy theater in Rotterdam, and Jeangu Macrooy will go straight to the final as a winning country in 2019. It is from Suriname, the former colony in South America, lives in Amsterdam and its musical genre is described as soul modern. As with Blas sang, Dutch television claims to have bet "on someone who has a career behind and reaches the viewer."

Eurovision organizers have included yet another singular note. Shula Rijxman, president of the Corporation of the Netherlands Radio and Television (NPO) has invited "all the former participants of the country who follow us, to the grand final of Eurovision." The entity hopes that the 65th edition will be an “unforgettable moment, and the legacy of this international meeting will be marked with our national music under the same roof”. The two most veteran singers summoned are Milly Scott and Thérèse Steinmetz, 86, who performed in 1966 and 1967, respectively. Both were music professionals before presenting themselves to Eurovision.

Despite his youth, his colleague Stefania Liberakakis has been on the scene almost all his life. He will turn 18 next December, and when he was 10 he participated in the national version of the contest The Voice Kids. Then she was part of the Kinderen voor Kinderen choir (Children for Children), made up of 30 children from 8 to 12 years old and has published 37 albums since 1980. Stefania was also a candidate to participate in Eurojunior festival, and acts in a youth film . “I can finally confirm the rumors: yes, I am proud to represent my country, Greece, in Eurovision, in Rotterdam. It is crazy to see that this dream has come true. I hope that my Greek compatriots, and also all Dutch, feel proud of me, ”he has written on his Instagram account. Annna, meanwhile, composes themes for commercials and is a music producer for dance choreographies.

The Netherlands, official name of the country, now favored as a brand by the Ministry of Foreign Affairs and the Tourist Office, instead of the place-name Holland - own only of two of the 12 provinces - has won Eurovision four times before. It was in 1957, 1959, 1969, tied with Spain, the United Kingdom and France, and 1975. Perhaps the most remembered song is Ding-a-dong, from the Teach.In group, because of their catchy chorus, but luck left them. Almost four decades later, in 2013, singer Anouk was ninth with a beautiful and sad theme, Birds In 2014, The Common Linnets, the duo formed by Waylon and Ilse Delange, reached second place with Calm after the storm (Translatable as calm after the storm), and the enthusiasm of his countrymen resurfaced.

In 2019, weeks before Duncan Laurence was proclaimed winner, the melody of Arcadian It sounded everywhere. In the final gala on May 16, when he has to play his music again, he has promised to "offer something very special," that exceeds the mere forced interpretation of the subject.