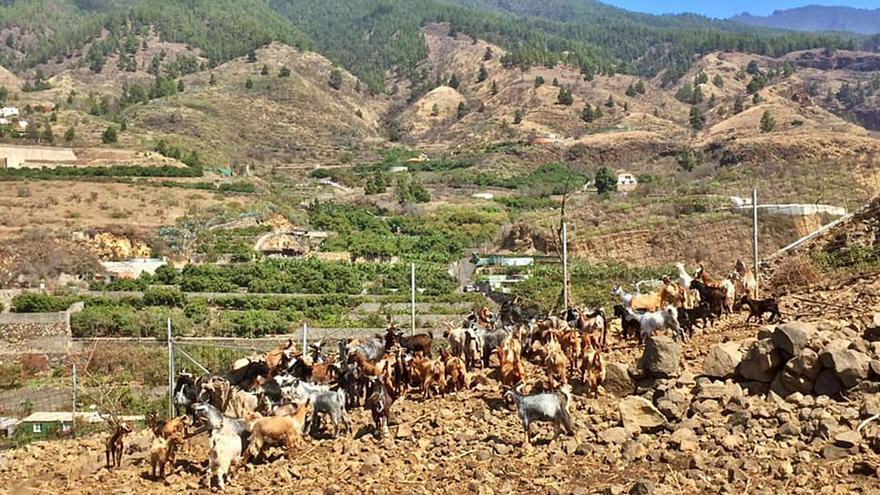 His voice transmits a distrust that is diluted as a telephone conversation matures that ends up being an inventory of misfortune, a chronicle devastated by the lava from the Tajogaite volcano. Julio César Leal Armas (50 years old) is the owner of Quesos Tajogaite, the businessman who during the second morning of the eruption lost two cheese factories: the one he set up more than three decades ago and the new factory where he planned to make cottage cheese, yoghurts and bottle goat milk. But the bad luck didn’t stop there. The magma also buried his house, his brother’s, his mother’s and his in-laws.

Julio César is the grandson of a Canarian who left for Cuba, the second son (Juan Ignacio is the eldest and José Gregorio the youngest) of a married couple who sought their fortune in Venezuela. His parents returned to Tenerife in 1982 and a year later they settled on La Palma. On the Isla Bonita his grandmother, Dona Carmen, had a wanker with a couple of goats. These two were followed by another two and a few more until he assembled his first herd. This is how the dream of starting a small family business began to take shape.

His entrepreneurial vision was already chiseled before he was 19. He bought a truck and immersed himself in the world of cheese. Everything overflowed door to door and word of mouth did the rest: neighbors from El Paso and Los Llanos de Aridane were the first to try their elaborations and one day, they even decided to extend their radius of action to Tenerife, but their first adventure far from home failed. “Too much tute for so little profit,” he says. As an alternative to that first financial upset, it was proposed to reach the 14 municipalities of La Palma and did not stop giving a wheel. “We have been selling all of our production on the island for years,” reveals a businessman who has not stopped adding farms to the cause. In the most favorable days, he collected 3,000 liters of goat’s milk, but times have changed and at the moment the average does not exceed 1,000: during the worst peaks of the pandemic, it did not control more than 600 liters.

Julio César is married to Ana Beatriz, Belki for those who make up his circle of closest friends, and he is the father of 13-year-old twins: Jesús and Julio. “The volcano has taken away what made me happy since I was 18 years old,” he says.

The Armas Leal family settled less than two kilometers from the place where the land was opened. «The day it exploded, I only had time to pick up some cholas, pants and a shirt. I was with that until Wednesday (September 22), saving the goats, and that day my wife came down to buy me some clothes, “he recalls about a forward flight that forced him to reset his life in hours. The morning after the Tajogaite volcano exploded, it was already negotiating with the Cabildo the transfer of infrastructures that had been created to house a regional cheese factory that was never inaugurated. The problem is that the machines were stopped since 2007.

Raúl Aguiar is one of the mainstays of Julio César, the technician who reviewed and started the operation (September 20) so that last weekend the Tajogaite Cheeses would resume their production in a factory in Las Moraditas (El Paso). Seven employees and a rancher (responsible for moving the 240 goats he owns) are the architects of the miracle. “For now we have concentrated on fresh cheese, but we also make a semi-hard one in the spring season,” he clarifies in reference to the transformation to which the milk collected from a free-range cattle is subjected (which goes free in the field, not like those that are enclosed in extensions).

Until three days ago, their goats moved through a meadow that is less than a kilometer from ground zero of this catastrophe, but the evolution of the volcanic crisis forces emergency measures to be taken: last Tuesday afternoon, Julius Caesar and Some friends transported the animals by truck to a farm located in Las Cuestas de El Paso, specifically, in an area known as Hermosilla. “We are trying to keep this moving, not to stop because then what do we do with the milk?” Asks a neighbor who has never been afraid to reinvent himself. Now, with the magma burying years of struggle and joys, he is beginning to have doubts. «La Palma is destroyed and the noise of the volcano does not stop. Not even in the worst nightmare does one put oneself in a situation as brutal as this, but there is no choice but to look ahead, “says a businessman who, within the chaos that reigns on the Isla Bonita, continues at the foot of the canyon. Julio César is aware of the economic wound that the volcano that emerged near his cheese factories has opened, but the days for reconstruction will soon come. Yours is already underway.

One of the few things that Julius Caesar has been able to save, besides his goats, in the midst of so many calamities is an old Toyota van that has more than 30 years of experience. “It has been with me since I was a child and it was good for me,” adding that the vehicle survived the washings because it was in a garage away from the perimeter where the rivers of lava flow. He, his wife, his children, his mother, his in-laws and his brother-in-law live share a roof in a house that a friend has given him in La Montaña de Tenisca. “We are escaping there until this clears up,” underlines a businessman who got up again before three in the morning to make a new batch of cheeses. “We have to get up early before they cut off our water,” he adds, at the same time that he dares to tell an anecdote that happened to him on Tuesday afternoon when he tried to go up to an area near the Tajogaite volcano to give the cattle a drink. «I could only go up at that time and a security member told me that it did not happen because he did not feel like it … I understand that in situations like these you have to be extremely safe, but there are ways of saying things, right ? If at that moment I do not contain myself, I am disgraced for life ». |