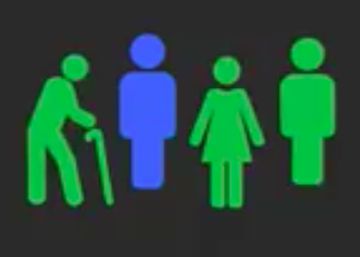 "We are more those who want to throw Sánchez de la Moncloa, but we each have our identity. Some of us are green, others are blue and others are orange," says a video of a ad Facebook page of the Association for the Defense of the Interests of Spain (ADIES), which simply titled "Add." The video asks to make "a deal to throw Sanchez and continue supporting ours." What is that deal about? In this: "If each family of four who support the green gives a single vote to the blue, we get to throw Sanchez while still supporting ours," concludes the voice in off on some images of a bunch of green family cartoons with one of its blue members.

"If every family of four who support the greens lends a single vote to the blue, we get to throw Sanchez"

The announcement is active on Facebook since Thursday and ADIES has allocated between 1,000 and 1,500 euros, according to the fork given by Facebook, to this announcement, which is aimed at people of all ages throughout Spain. The announcement is likely to target people who have shown interest in right-wing parties or conservative ideology, but the company does not give that level of detail.

ADIES is one of the accounts that emerged as part of a hypothetical network of fake pages in favor of the PP on Facebook, which revealed this newspaper. The connections between the administrators of different pages allowed to trace their alleged relationship with a young PP supporter in Murcia and the consultant that advises the campaign of Pablo Casado. The rest of the pages linked to that network remain inactive.

The Central Electoral Board (JEC) dismissed this Thursday the appeal that Más País and the PSOE had presented last week against these pages: "It has not been minimally proven that this formation (in reference to the Popular Party) can be the author of the facts denounced ", said the JEC text.

The ADIES page has circulated three other ads aimed at voters in Andalusia and Valencia, with an investment as large as for the video that asks for the vote openly for the PP. In total, the investment reaches 6,000 euros and will reach about 1.5 million views. According to Facebook data, the ads will be active until Sunday at 8 pm, closing time of the polling stations. Ads directed to Andalusia cite information from the newspaper ABC over one alleged vote purchase of the PSOE. In Valencia, they cite a link to the newspaper The provinces who reports an investigation to the brother of the president of the Generalitat, Ximo Puig, and the director of Linguistic Policy.

ADIES is a page that belongs to an association registered on September 30 at the Ministry of Interior. One of its alleged members, Manuel Onrubia, told this newspaper that they had no relationship or preferred any political party. But his preference for the color blue and for the unity in the vote of the right-wing parties coincides with the popular strategy. The distribution of votes in a province between three forces makes it more difficult to get seats.

The official page of the Popular Party has also been active since Thursday a campaign to encourage voters in a province to unify the vote in its brand: "In the last elections, in Albacete 33,948 voters chose Vox, but Vox did not get any seats. If you vote for Vox you will give your vote to Pedro Sánchez, "says the text next to a map of Spain where the province of Albacete stands out. There is a version of this active advertisement at the moment in Albacete, Teruel, Pontevedra, Vizcaya, Ourense, Castellón, Álava, Ávila and La Rioja. In all cases, most of the time the party that "spoiled" its votes is Vox, except in the two Basque provinces, where it was Citizens: "In the last elections, in Vizcaya 21,021 voters chose Citizens but Citizens did not get any seats "says the text.

Before Thursday their ads already warned about not voting for the PP if the goal was to win Pedro Sánchez, with Vox as the only objective: "The 10N if you vote for Vox in La Coruña you will be giving your vote to Pedro Sánchez." Vox has displaced Citizens as a target for PP announcements since the last campaign.

The PP is not the only party that uses this strategy. Citizens already used it in April and this time In Comú Podem asks its voters in Catalonia not to vote for More Country, although with less provincial specificity: "The Errejón party will not get any seats in Catalonia, and their votes will subtract those from In Comú Podem ".

Cyber ​​attacks on Spain are triggered by the coronavirus vaccine

China threatens US retaliation for its WeChat and TikTok veto