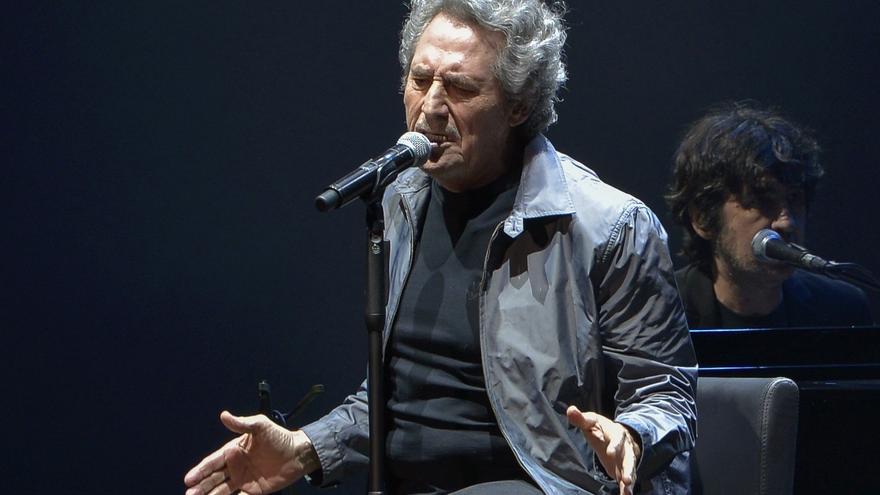 Marbella (Málaga), Jun 19 (EFE) .- Miguel Rios drove the public crazy this Saturday in the first concert of his return to the stage with "Un Largo Tiempo" in which, accompanied by "The Black Betty Trio", he performed songs of his new work and previous hits like “Santa Lucía” or “Himno de la Alegría”.

The lights went out and silence took over the Starlite Marbella auditorium (Malaga) before the imminent start of the performance and thus, without further ado, the stage saw the light again to receive the artist amid applause and cheers from an enthusiastic audience.

The show began with “Hello Rios” where the man from Granada, who has just turned 77, tells how a retired musician feels and the reasons that have prevented his final goodbye to the stage.

He hooked with one of his star songs, the popular "Welcome"; that with its first chords it infected the spirit of the assistants to accompany him with the palms and ... to sing.

"A junkie of applause", that's how Ríos defined himself when he confessed why he resists leaving the stage and before continuing with "Menphis-Granada", a song from his latest album, he was relieved by the evolution of the pandemic that , finally, "lets see the light at the end of the tunnel."

“Maruzzella”, “Por San Juan” and “Los Viejos Rockeros, Memorias de la Carretera” sounded and again the audience could not resist singing along with the artist who commented with a knowing smile that, as he is “an older man”, he was going to take the license to intersperse pieces of his new work with previous ones.

More clapping to the beat of the chords and the voice of Miguel Rios who at this point in the concert already had in his pocket those present in the Marbella auditorium of La Cantera.

IF THERE IS NO EXTREME NEED, PURCHASE DISCS

Sixty years ago he started “in this”, the artist pointed out, and thanked those who listened to him for having been his patrons at this time; and before starting with “Cruce de Caminos” he encouraged, among jokes, to buy records on the way out, especially if there is no “extreme need”.

He continued with "Raquel is a Brothel", whose lyrics address the issue of prostitution, and in a more serious tone pointed out that the failure of this society "is illuminated by the lights of the brothels."

With “Alabama Song” and “A Contra Ley” ´ -according to Ríos “the funniest song” on this album-, followed by “En la Frontera” -another song with a message- the concert reached its halfway point.

THE HUMAN BEING CAN DO EVERYTHING

It was the turn of another song that reflects the concerns of its author, "Todo a Pulmón", but this time looking at the positive side of the human being that "can do everything" and after him "For me to call myself Ángel González" to the Asturian poet of the Generation of 50.

With almost two hours of concert, the "Blues of the Third Age" - "a song of love to the girls" of his generation-; the “Bus Blues” and a “Hueco para Luis” the performance entered its final stretch.

Ríos took a short break and returned to perform "Year 2000", "The Line of Cain" - focused on the fragility that the pandemic has shown - and finish with "Rocanrol Boomerang".

An enthusiastic audience asked for more and the Granada-born man pleased by interpreting “El Río”, “Que Salgan los Clowns” and of course, “Santa Lucía” that brought the entire audience to its feet.

How could it be otherwise, the finishing touch to the concert of the emblematic singer-songwriter, who performed 24 songs, was put by the chords of his mythical "Hymn of Joy".