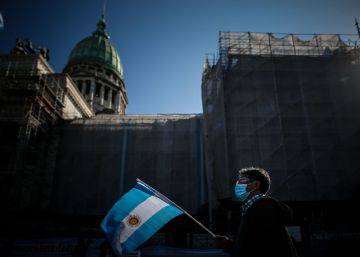 Investing 82,000 German marks (42,000 euros) in 1996 in an Argentine bond and, 24 years later and two bankruptcies through, still waiting to collect. That is exactly what has happened to a German private investor. In the last turn of the court battle, a court of first instance in Madrid has refused to seize the accounts that Argentina has in Spain, despite the fact that the Supreme Court had agreed with the plaintiff.

The case is one of the most complex that has been experienced in the financial field in recent decades. Argentina went bankrupt in 2001 (it went bankrupt again in 2020) and began to renegotiate with the big creditors. Most accepted a deal in 2014, but the small German investor decided to wage war on his own.

The Provincial Court of Frankfurt He ruled in his favor and his lawyers decided that the best way to enforce that sentence was to do it in Spain, where Argentina has more assets and commercial interests. But it wasn’t going to be that easy.

A first court The instance initially ruled in favor of the plaintiff, but the Cuatrecasas law firm, which represents the Argentine Republic, appealed the judgment and the Provincial Court of Madrid annulled it. However the Supreme court Yes, it gave the reason to the claims of the German citizen and established in October 2019 that there are some state assets that can be seized.

Recapitulating: favorable rulings from the Frankfurt Provincial Court, from a Madrid court of first instance, from the Supreme Court … So, would it already be? Well, no.

When the legal representatives of the investor went again to the Court of First Instance number 87 of Madrid with the judgment of the Supreme under their arm, they asked to start the execution process, the problems returned.

They asked the judge to seize the current accounts, securities and cash that the Argentine Republic had in the Bank of Spain. Also the accounts and the cash that it had in the branch of the Banco de la Nación (a financial entity of retail banking, controlled by the Argentine State) located in the Salamanca district of Madrid. The amount to be seized already exceeds 180,000 euros, for late payment interest and court costs.

However, once again, things have gone wrong, and the judge agreed in a car in May that she could not proceed with these embargoes because she belonged to the Argentine diplomatic legation in Spain.

“We do not understand that this matter is being questioned again, when the Supreme Court has already established that there were exceptions to the immunity from execution against States, when the property whose seizure is claimed is used for purposes other than official”, explains Jacinto Soler, from BSP-Abogados, legal representatives of the investor.

The friction point is the same again: Can the property of another State be seized? The general principle of diplomatic immunity and inviolability of the assets of the legation abroad is no. The representatives of the Embassy cannot be prosecuted, nor the premises registered by the Police, nor the property can be seized by a civil court.

Now, the Vienna Convention, which regulates diplomatic relations, has established some exceptions. The first, that the State itself accept the execution. The second, that the assets to be seized have been previously assigned for this purpose (such as a surety or surety) and, thirdly, that they are “assets used by the State for purposes other than official non-commercial purposes”, as explained by the Supreme Court in his sentence.

For the lawyers of the Argentine Republic, all the money and accounts that the country has in Spain are linked to diplomatic and consular action, while for the investor’s representatives, it cannot be argued that the embargo of 180,000 euros goes to affect diplomatic activity.

Meanwhile, the investor has received several approaches from Argentina to accept a settlement, but has flatly refused. He has the financial solvency and the patience to get back what he considers his own (the initial 82,000 marks, plus interest).

The case has aroused the interest of other institutional investors, especially in vulture funds, who refused to accept the restructuring of Argentine debt.

The investor’s lawyers have directly asked the governor of the Bank of Spain, Pablo Hernández de Cos, to be in charge of the execution of the Argentine accounts. It remains to be seen if the judge ends up transferring this request to the head of the supervisory body.