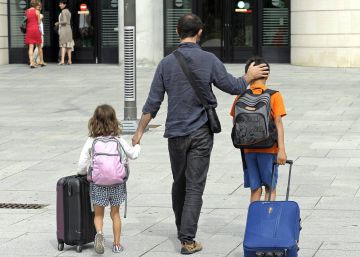 There are different ways of educating, but not all are comparable or generate the same benefit for children. It is the conclusion that is drawn from a recent ruling of the Provincial Court of Murcia, which has refused to grant a parent the joint custody of their two children by understanding that the “authoritarian” way of relating to them goes against the interests of The minors.

The bug, which you can check here, further notes that the man has not been involved so far in the work of raising children and has usually delegated to third parties their obligations as a parent.

The resolution emphasizes that, unlike the father, the mother has developed an “assertive” educational model that is clearly beneficial for children who, on the other hand, are fully integrated into their environment. This fact, together with “the lack of prominence and initiative” of the father, has led the court to exclusively attribute the custody and custody of the two minors to the woman.

The couple had been married, on a marital basis, since July 2013. Five years later, in 2018, the marriage decided to divorce without reaching an agreement. The case reached the courts, among other reasons for an economic disagreement: while the woman requested to remain in the family home and to establish a pension (both for herself and for the children), the man defended her right to shared custody and he understood that it was not necessary for any of the spouses to pay any amount of money to the other.

The Provincial Court (AP) now ratifies the divorce decree of a trial court that ordered the children to remain in the care of the mother and established an alimony of 200 euros for each of them. The PA also improves the compensatory pension for women, from 150 to 250 euros, for two years, for understanding that their economic situation has worsened as a result of the separation and that the man, who works as an engineer, has more than enough creditworthiness to cope with these economic burdens.

Best interest of the children

The father appealed the sentence alleging that the system of parental responsibility has become in recent years a “normal and priority model” for most family courts and that the ruling contravenes that trend for no apparent reason. But his arguments have failed to convince the court.

The magistrates maintain that their decision is based on the report of the forensic psychologists who examined the minors and “responds appropriately to the best interests of the children”, in accordance with the jurisprudence of the Supreme Court. In that regard, they recall that the High Court has clarified, in numerous sentences, that this interest constitutes the “ultimate goal” of any custody system, including the shared one.

It is not the first time that justice adopts such a measure. Without going any further, a court of first instance in Zaragoza decided last month to withdraw a parent from the custody of their children, claiming they spent too much time with their grandparents.

Like the PA of Murcia, the Aragonese court took into account the opinion of the psychosocial team when assessing whether to maintain the co-responsibility regime initially agreed by the spouses, or attending to the mother’s demand, who requested the sole custody of the two children after verifying that the paternal grandparents came to take care of them up to 12 hours a day.

After analyzing the psychological report, the judge concluded that, despite the fact that the children maintained a good relationship with their father, it was most beneficial for them to stop living with him, because “it is one thing to have support of relatives and another delegate their obligations completely. “

The art. 92 of the Civil Code establishes that in order for the judge to grant a shared custody regime, both parents or at least one of them must request it (if they disagree). It is also mandatory to issue a report, favorable or not, of the Prosecutor’s Office and the hearing of minors by a forensic psychologist, provided they are sufficiently mature.

Despite these requirements, the Supreme Court clarified in a 2014 ruling that shared custody “is not an exceptional measure, but on the contrary, it will have to be considered normal and even desirable, because it allows the right of children to interact with both parents, even in crisis situations, whenever possible. “

Experts agree on the need for a harmonious relationship between parents. That is, they have acceptable and sufficient communication to make decisions regarding the daily life of minors. Beyond that common sense premise, the law expressly prohibits granting joint custody when there is an ongoing judicial process against any of the parents “for attempting against life, physical integrity, freedom, moral integrity or sexual freedom. of the other spouse or children. “