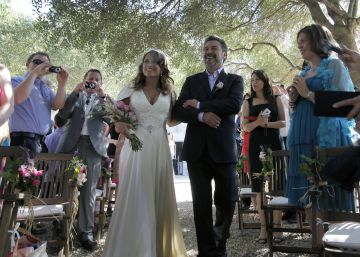 Dismissed for getting married. This is the reason why a Galician company, Clusaga (Clúster Alimentario de Galicia), dismissed an employee just twenty days after she announced the date of her link. This is corroborated by a judgment of the Superior Court of Justice (TSJ) of Galicia, which annuls this decision as discriminatory and condemns the employer to compensate the woman with 15,000 euros for the moral damages caused by the episode.

The ruling (whose content you can consult here) considers it proven that the real reason for the dismissal of the worker was her decision to go through the altar and take the fifteen days of paid leave, and not, as stated by Clusaga, that the project for which she worked had ended. According to the magistrates, there were sufficient indications in this regard that the company was unable to dismantle. As it is a cause of discrimination prohibited by law, the ruling requires that the expelled worker be reinstated and compensated for the suffering: she received the burofax for dismissal two months before the wedding.

In the words of the magistrates, the lack of justification for the dismissal was “obvious” and, in addition, the company persisted in its error, advertising through social networks that the former employee was no longer part of the project when this decision was discriminatory. One of the ways in which women have historically suffered from labor exclusion, recalls the court, is by the fact that they “got married.”

According to the resolution, the events were precipitated by the announcement of the link. The wedding was to be held on August 24, as reported by the worker at the beginning of June 2019. The woman planned to take, between vacations and the honeymoon, from August 5 to September 9. However, on June 25, she was called to tell her that she was fired. In fact, they informed him of the termination of his contract, for which he only received 1,024.93 euros of compensation.

In fact, the employee was in Clusaga for work and service since April 2018, as a technician of a program whose duration was budgeted (for a total of 1,213,047.24 euros) until February 2022. Just two days before its dismissal, they had confirmed that they counted on her one hundred percent to continue with the project until the end.

The worker then took her case to court and won. But the sentence of the Social Court number 2 of Santiago de Compostela did not void the dismissal. He considered it only inappropriate. The reason was that the contract for works and services was fraudulent. For this reason, he urged the company to reinstate the former employee or to compensate her with 2,825.34 euros, from which the amount advanced with the dismissal letter had to be deducted. That is, 1,800.41 euros.

However, the Galician court decides the appeal in favor of the worker. This insisted that the termination should be declared null because it was discriminatory and not just inadmissible. The substantial difference is that the cancellation of a dismissal supposes that it never existed and, therefore, entails the obligation of the employer to return the worker to his position and to pay him the salary that he stopped receiving in the meantime. One of the reasons for which the judges declare the nullity of a termination is that it occurs for a discriminatory reason. For the worker, this is what had happened: she was expelled immediately after informing the company management of her decision to marry, just one day after they had confirmed that they had her.

“Our legal system does contemplate discrimination on grounds of marital status as a cause of nullification of the dismissal,” says the court. In addition to being expressly provided in the Workers’ Statute, Article 14 of the Spanish Constitution itself prohibits this type of decision based on “odious” differentiations for an “elementary option” or for the exercise of “the most basic freedoms”.

The evidence in this regard was so clear that the company was unable to dismantle the argument. As the magistrates of the Galician court recall, in these cases the alleged victim is protected and it is the employer who must prove that the termination had no illicit motive. The change of marital status of any worker can never justify a dismissal. And, in this case, everything indicated that this had happened. The resolution speaks of a “clear temporal immediacy” between the communication of the wedding and the termination, and highlights the fact that, according to what they assured him, they had it until 2022. Moreover, a few days after firing his employee, Clusaga hired another project technician.

On the other hand, the fact that there were married employees on the workforce does not nullify these discriminatory signs, the court affirms. Nor that the company had hired another company one week before the dismissal to “support the economic and administrative management of the project.” The magistrate herself, it is pointed out, already ruled out in her sentence that this commercial substitute for the functions of the worker.

For all this, the magistrates conclude, the dismissal is null. The ruling condemns Clusaga to reinstate the employee and pay her salary since she was expelled from the company. In addition, since there was discrimination, they grant the compensation requested by the worker. Specifically, 15,000 euros, which are considered adjusted and “prudential” taking into account “the context of the personal life” of the woman in whom the measure was adopted. He unexpectedly lost his job in the vicinity of his wedding, presumably making him uneasy and uneasy. A whole jug of cold water just before such a major change.

Ultimately, the circumstances in which the termination occurred suggest that the non-pecuniary damage caused was significant, so the court considers the amount requested “reasonable and proportionate”.