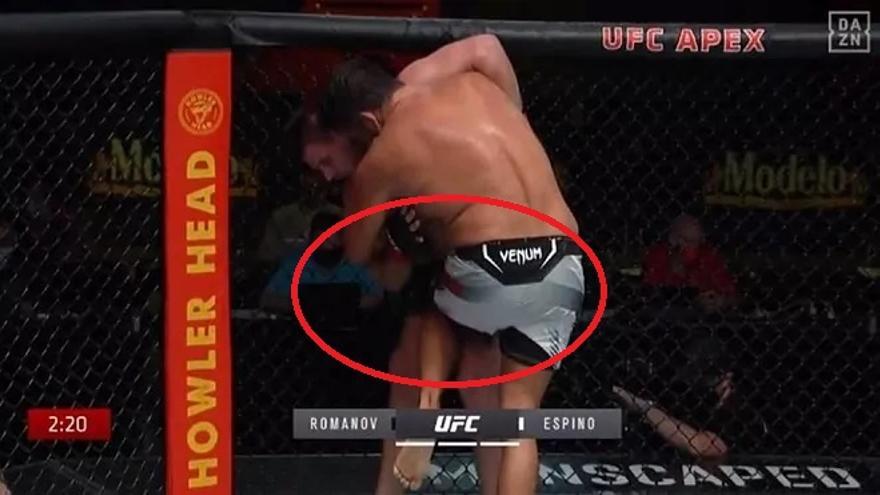 Moldovan Alexandr ‘King Kong’ Romanov defeated the Spanish by split decision Juan ‘El Guapo’ Espino this Sunday in Las Vegas, United States. A fortuitous blow from the Spanish in the genital area of ​​the Moldovan stopped the contest. The judges saw the Moldovan ‘King Kong’ as the winner after failing to recover from Espino’s knee in time.

“I want revenge. It was a robbery.”

The Gran Canaria fighter showed his discontent and gave his version of the fight through his social networks: “Sometimes you win and sometimes you lose, it is not the first I lose nor the last but I honestly do not understand how a knee is thrown To score, he had no strength and I would also love a better recording because it did not hit his parts. Even so, and taking advantage of the fact that he was tired and knowing what was coming, Romanov took the opportunity to play the role of his life. Judges must score the fight until that act happened. I took the first and third rounds, everyone can see it. I want a rematch. This was a robbery. ”

Romanov began by taking the center of the octagon, Espino, analytical and making use of his footwork, looked for the moment to influence the Moldovan. ‘King Kong’ led the contest flush with the canvas and ultimately against the cage. Although it did not put the Spanish in trouble. ‘El Guapo’ moves like a fish in water in this facet.

Espino turned the tables, put the back of his rival on the ground and tried to sign the submission, but without success. The first bars did not disappoint, there was a contest between fighters and that was what we had.

Good level changes in the hitting of the Spaniard during the second round to find the grip. Espino gave Romanov a big knee, but the Moldovan’s chin met him with surprising strength.

‘King Kong’ also lived up to his name and squeezed the canary at times with his blows on the canvas. Very physical contest that neither of us shunned. In the third round the plan from Espino’s corner was clear. Work the volley shots on your opponent and get an advantageous position in the grip by standing on his back.

A fortuitous knee in Romanov’s genitals ruined the contest. The Moldovan, exhausted, could not recover from the blow in the five minutes established by the UFC in these cases and could not continue. ‘King Kong’ took the victory by split decision. Surprising measure, he himself shook his head the judges’ verdict.

‘King Kong’ adds, unexpectedly, his fourteenth victory as a professional and his third inside the UFC octagon. A bad blow sentenced Espino, who showed a great level inside the cage, but was unlucky.