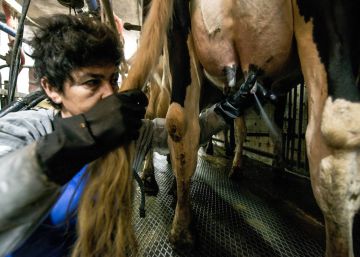 Discrimination against women at work due to maternity is a scourge against which Justice cannot lower its guard. There are still many cases of dismissals in which the courts detect that, after the argument official exposed by the company to justify the termination (the one expressed in the letter of dismissal), in reality there is a penalty for the fact that the employee will be or has recently been a mother. However, in some cases, companies do not even bother to offer a reason for dismissal that is judicially defensible, leaving even more in evidence discriminatory intention that underlies its performance.

This has happened in the case of a veterinarian, a worker in a rural area of ​​León, which her company dismissed while he was on leave for tendonitis When her maternity leave ended, the applicant informed the company that she was suffering from a condition that prevented her from being reinstated. Then, the company hired a private detective to follow her, because they suspected she was in a position to perform her duties. After the inquiries, the organization's management notified its employee of her disciplinary dismissal, alleging a "serious breach of duty in good faith" contractual, since she had been seen with her daughter (still breastfeeding) or making the purchase. As the company argued, that it could carry out these activities showed that it was in valid health conditions to deal with cattle.

The social court that knew the matter in the first instance has already declared the dismissal void for being discriminatory. A decision that, after the appeal filed by the company, confirms the Superior Court of Justice (TSJ) of Castilla y León (resolution that can be consulted here). We must also take into account that the daughter of the veterinarian I still hadn't turned 12, a period that is especially protected by the Workers Statute in its article 55.5.c).

An infant is not a beef

According to the appellant society, the termination in no case was due to his state of gestation or subsequent maternity, the cause was the report of the private detective "evidenced the good state of health of the plaintiff and her incorrect fraudulent action to remain in situation of medical leave ". However, the judges believe that the company activated the dismissal appeal with very little evidence of the existence of irregularities around the situation of temporary disability.

As explained in the resolution, there are no proceedings aimed at verifying the reality of this situation. Moreover, they remember that although the mutual company withdrew the worker's subsidy due to her situation of work leave, she was legally forced to recover it. "The fact of providing an expert in which it is described how the plaintiff developed an ordinary life with her youngest daughter is not, as presented, synonymous with fraud," said the judges.

The TSJ also emphasizes that it is consolidated jurisprudence that performing acts of daily life does not doubt that, at the same time, professional activity cannot be carried out in conditions of safety and efficiency. "It seems notorious that the care of the infant or the transport of the daily purchase does not entail the own demands of the handling and care of the cattle, activity carried out by the plaintiff as a field veterinarian", ditch the sentence.

For all these reasons, the judges understand that the company has failed to demonstrate disciplinary causes, so Article 55 of the Workers' Statute (ET) is activated, which declares the dismissal of an employee before 12 months after birth is void. of a son