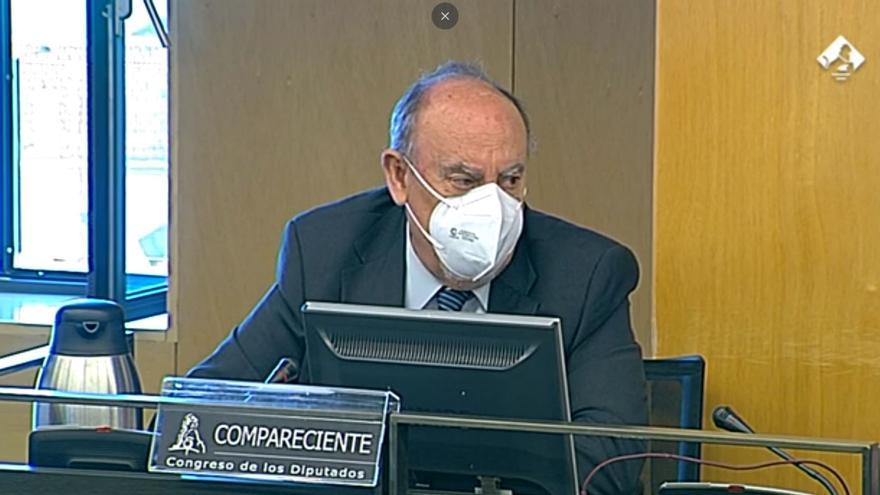 The retired commissioner Felipe Lacasa has described this afternoon in the Congress of Deputies the operation of the funds reserved in the Police in the period in which he was secretary general of its Deputy Directorate of Operations (DAO), under the orders of Eugenio Pino. Lacasa has explained how Pino, the operative chief that the PP chose for the Corps when Rajoy came to the Government, had absolute control and decision over these games and that he not only dedicated them to the different units but also to a group of policemen chosen by him and of which Lacasa offered the names one by one. They are none other than the front line of the PP’s political brigade.

“Give him what he asks,” Pino said to Lacasa, “paying cashier” of the funds reserved between 2013 and 2015, the date of his retirement, as he himself has described. That is the expression that Pino used for José Manuel Villarejo, Enrique García Castaño and the rest of those investigated in piece 7 of the Villarejo case, the one investigated by Operation Kitchen: Andrés Gómez Gordo, José Ángel Fuentes Gago, Marcelino Martín-Blas and Bonifiacio Díaz Sevillano. All those names were confirmed by Lacasa as recipients of funds reserved at the decision of Eugenio Pino, also accused.

In the case of the funds reserved for the driver of Bárcenas, Lacasa has said that Villarejo initially received them and then Gómez Gordo, the police adviser to María Dolores de Cospedal in Castilla-La Mancha. There, the appearing party has contradicted himself in part. “Mr. Pino had his trust placed in police professionals of different categories,” Lacasa assured in reference to those members of the political brigade. Deliveries, he added, took place in the presence of the recipient, himself, and sometimes Pino and the secretaries.

At first, Lacasa had declared that he learned about Operation Kitchen from the press and, probably, while already retired. Later, he acknowledged that when he saw Sergio Ríos’s name, he linked him to Bárcenas because, according to him, before the Kitchen case broke out, the driver’s name was already appearing in the press. He has also explained that in one of the games he handed in, a “cook” was mentioned, but that then he did not know how to link him.

The retired commissioner Lacasa has declared that he thought, as a hypothesis, that this money for the driver was for an investigation that Bárcenas could be stealing money from the PP and that it would have denounced him, although he has not clarified how the Police could lead to carry out such an investigation without judicial authorization. He ruled out, he added, that it had anything to do with politics. “When the police get mixed up in politics, our clutch slips,” he added.

In any case, Lacasa has stated that “the money was very controlled”, referring to the reserved funds and that all those who received funds signed a receipt. “It seemed to me that the use was correct,” he added. Most of the groups have thanked him for his collaboration in contrast to the physician Miguel Ángel Bayo, the “man with the briefcases” who appeared yesterday and what happened to him as a “paying teller”.

Asked by Enrique Santiago, from Unidas Podemos, Lacasa has admitted that he once formally gave money to Fuentes Gago for a trip. “To New York?”, The deputy asked, to which the retired commissioner replied in the affirmative. It refers to the trip that the chief inspector made to the US city to try to get a signed statement against Podemos from a former minister of Hugo Chávez to prevent the purple party from reaching the government in 2016. In a recording published by moncloa.com, Fuentes Gago assures the former Venezuelan minister that he is coming to him with a “mandate” from Mariano Rajoy.