In this scenario, the collaboration agreement between the two moves that, in addition to encouraging employment, seeks to fight against the stigma of this disease. The idea that a job benefits the person is an obvious perception for all the professionals who make up this unique project to rescue and integrate mentally ill patients.

The keys and the protagonists of the project

The action is framed within the draft Together We Are Capable of Fundación MAPFRE which aims to promote the labor integration of people with intellectual disabilities and mental illness, fostering relations between companies and social entities from an approach that allows the labor integration of this group since, despite the fact that undeniable social progress has been achieved, it continues encountering obstacles and impediments when entering the world of work, which hinders their full integration.

Fundación MAPFRE sources indicate that: “We want to get companies to become the engine of transformation of society in terms of equity and social cohesion. Since 2010, when the project was launched, more than 5,400 companies have joined and we have visited and sensitized more than 8,000 “.

The other major axis of the program is Murcia Region Mental Health Federation, a non-profit organization that aims to adopt measures that contribute to the improvement of the quality of life of people with mental health problems and that of their families.

It was born from the need of family members and people with mental health problems to claim services and resources that were non-existent or insufficient for the normalization and rehabilitation of this group and having as a priority goal the promotion of these people and the defense of their rights .

Currently, it is the only regional entity that represents people with mental health problems and their families and belongs to the Mental Health Confederation of Spain, the European Federation of Family Members of People with Mental Illness EUFAMI and the Spanish Committee of Representatives of People with Disabilities CERMI.

Its structure is made up of 14 federated associations and 1 collaborating member that, in total, represent some 1,800 families. Taking into account that each family nucleus is made up of 4 members, the Federation reaches 7,200 people throughout the Region of Murcia.

The Confederation manages at the state level a catalog of social intervention programs that it offers to its member entities so that, from the local level, they can provide direct care with people with mental disorders and their families. These programs have as a mission, according to sources from the Federation itself: “Promote comprehensive accompaniment or job placement, initiatives that meet specific needs such as those of people with mental illness who are in prisons or that promote the exercise of rights of these people. Another series of programs are also carried out that aim to facilitate the enjoyment of leisure and free time of the group, which offer support to their families and relatives or that promote their autonomy by offering them access to a home ”.

Keys to collaboration and results

The relationship between the Federation and Fundación MAPFRE is long and productive, since March 2010, through a collaboration agreement for training actions that has recently been renewed.

It should be noted that in 2020, despite the pandemic situation in which we found ourselves, 24 training actions were carried out, of which 5 generated in employment contracts. East first semester of 2021, 25 training actions have already been carried out that have generated 5 hires.
As reported Happy wonders, Coordinator of Employment of the Federation: “In total there are more than 195 training actions, some of them have achieved the insertion with a contract in the job for which the training was carried out”. 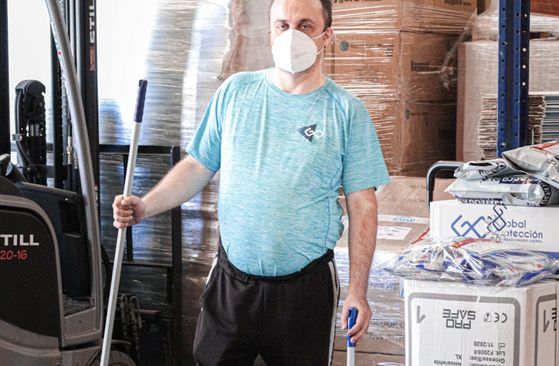 According to the Murcia Region Mental Health Federation, the hiring of people with Mental Health problems increases more than 50% in 2021.

The team has also managed to sign different collaboration agreements between associations of the Federation, the Town Halls of the corresponding localities, and also participate in Business Days as collaborators.

Since its inception, the Federation has been adding to the entities of family members and people with health problems from the entire region, strengthening the associative movement with the union and coordinated work of all associated entities. It currently has 15 partner entities.

The Federation has been expanding the services it offers both to associated entities and to people with mental health problems, their families and society in general. Likewise, it has been possible to expand the number of professionals within the Federation’s labor insertion service that “It has allowed us to reach more people throughout the region, with a higher quality service and also provide more training actions for employment”says Happy.

Another achievement has been the launch of a care service in prisons for people with serious mental disorders who have been prosecuted. Likewise, progress is being made in the empowerment of people with mental problems with the constitution of the Committee Pro Mental Health In First Person of the Federation, made up of representatives of all associated entities, who are spokespersons for the associative movement and participate with voice and vote in the governing bodies of the Federation.

In order to improve the quality of services and transparency in management, an ISO 9000 Quality Management System has been implemented, the equality plan and the strategic plan of the Federation that sets the strategic objectives to work for the entire movement associative in the coming years.

As an associative movement, according to Felices “Advance a lot in the offer of services by getting entities to manage dependency services arranged with the administration; currently we have 11 day centers, 1 residence and 8 sheltered homes for dependent people with mental disorders “.