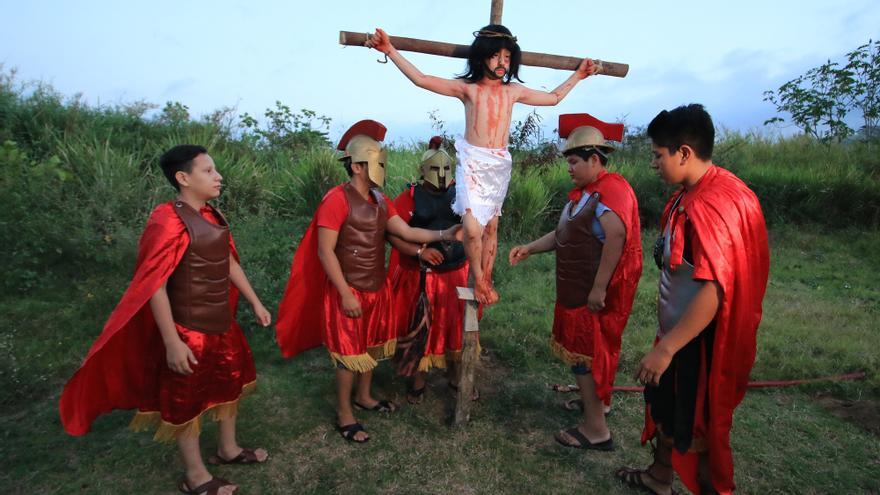 Cárdenas (Mexico), Apr 1 (EFE) .- Among prayers for the end of the pandemic and femicides in Mexico, Rodrigo Vidal, 10, represents Jesus in a Stations of the Cross made up only of children in the municipality of Cárdenas, in the southeast of the country.

“I do it so that the children follow this example and first, God, let us get out of this covid-19 pandemic. His passion, death and resurrection (of Christ) represents a lot for me. I am saddened by what he suffered. I would ask (Jesus ) to stop those who kill women, those who rape and femicide, “said Vidal.

Together with a score of other boys, girls and adolescents, and accompanied by his parents, the boy participated in the recreation of the moments lived by Jesus of Nazareth, from his arrest to his crucifixion.

Rodrigo studies the sixth year of primary school and was chosen to play Christ because he and his parents are an example of life for the Catholic community. He is a child with great oral capacity and passionate about the work of God, expressed his relatives.

“We know that thanks to God there are already vaccines, but we continue to pray so that we can have a normal life and that the children return to school, that the stress that lives at home be removed and take the opportunity to tell people that Christ is alive” added Virgilio Martínez, organizer of the Children’s Way of the Cross.

This activity arose at the insistence of the minors and because their parish remains restricted to liturgical activities with crowds to avoid contagion by the coronavirus.

“They are very active and always participate, but due to the pandemic many Catholic events were canceled. And seeing that we would not have (the traditional) living Stations of the Cross, the children decided to do something new and the idea came up,” said the father of family.

The grandparents and an uncle of little Christ were infected with covid-19 and are already recovering, while his parents have remained healthy during this harsh pandemic, which in Mexico has claimed more than 202,000 lives and adds 2.22 million infections .

Little Jesus’ father works with aluminum and his mother is a housewife.

A humble family that put great care in their education.

“Seeing the responsibility of parents in the education of the child, we chose to invite him so that everyone would grow spiritually. From the beginning we saw him to play the role of Jesus because he is very committed and passionate about the things of God,” he said Virgil.

The last stop of the Stations of the Cross was recreated in a vacant lot infested with ants that during the entire staging attacked the participants, one of them, who played the “Bad Thief” who was crucified next to Jesus Christ, had to get off the cross by the relentless bites.

To comply with sanitary protocols, the organizers of the children’s way of the cross used different outdoor locations in the Guadalupe colony (neighborhood), near the Virgen de Guadalupe hermitage, in Cárdenas, about 47 kilometers from Villahermosa, the state capital.

The preparation work of these young people was arduous and lasted about two weeks in which they worked in the children’s representation; that goes from the arrest of Jesus Christ, to the mass of the last supper, the washing of feet, the condolences to the Virgin, the march of silence, the worship of the cross and the crucifixion.

The southeastern state of Tabasco remains at an epidemiological orange traffic light (high danger) and although its churches partially opened with a capacity of 30% of their capacity, all activities that can cause crowds, such as processions, were suspended.

For this reason, this representation will be broadcast virtually this Good Friday on Facebook, combining tradition with modernity and new times.

With 97.8 million believers, Mexico is the second country in the world with the most Catholics, after Brazil.