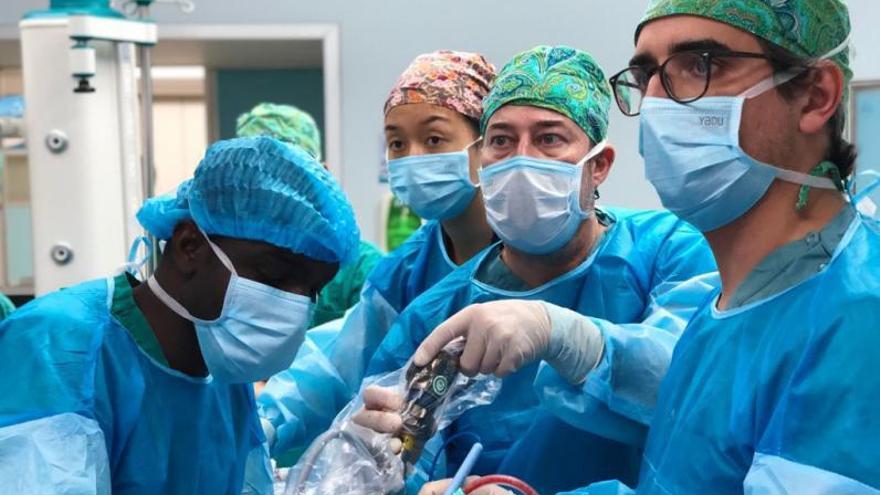 “The group of animals that was transplanted and that did not receive ozone experienced chronic rejection, while those that were administered gas before surgery and during the following months did not suffer from this problem,” explains the doctor.

So far, there is no drug to prevent this complication, so the specialist believes that it is an “important finding”, as it opens a hopeful path to people who require a transplant of this type. “When ozone is injected into living beings it has an antioxidant effect. What we have done is administer small amounts, progressively, increasing the dose over a long period of time “, the professional details.

But how should this compound be administered? Based on the words of the person in charge of the aforementioned service, it can be rectally or through the bloodstream. In the case of the animals that have been tested, –mainly rats– the rectal route was chosen, but in humans the other alternative could also be used. “It is necessary to take a blood sample of about 250 milliliters to apply the ozone and then to re-transfuse the patient slowly and safely. It is important to note that it is a gas that does not have side effects if the dose is adequate, “says the expert.

The intention in this clinical trial is to administer ozone by any of the aforementioned routes, before transplantation and during the six months thereafter, to find out if the therapy can protect humans from this adverse effect. And it is that chronic rejection can occur from the first year of the operation, which causes concern among professionals. “The organ becomes poorly functional, which leads the body to recognize it as foreign and to cancel it,” highlights the health worker.

The truth is that the Covid-19 pandemic has slowed the progress of this investigation, which aims to involve hospitals around the world. “Right now, we are writing the clinical trial so that later we can request the pertinent authorizations and proceed to its international registration. The situation has not been easy, but I am contacting different centers so that they can join us and develop a multicenter study “, emphasizes the surgeon.

It should be noted that Dr. Santana participated this month in the International Cardiothoracic Conference, organized by the BSMS Cardiothoracic Surgical Society at Brighton and Sussex Medical School, where he gave a videoconference talk focused on explaining the past, present and future of lung transplants. On these lines, the Gran Canaria doctor points out that, thanks to the improvement in surgical techniques and in the selection of donors and recipients, in the last decade there has been a “slight increase” in the survival of people after five years. be transplanted, going from 53% to 59%. “The lung continues to be the Achilles heel of our patients. It is true that other organs are also rejected, but survival is usually greater in other transplants because, in some way, it has been better controlled, “warns the specialist.

What criteria are taken into account when selecting donors and recipients? In the case of the former, it is essential that they are not afflicted with oncological pathologies, that they lack a long history of smoking, that they have not been ventilated for more than five days in intensive care units, that the function tests show that the organ is in good condition and that, preferably, they are under 55 years of age.

Likewise, recipients must have a blood type compatible with that of the person who is going to donate the organ to avoid complications. “Immunologists also perform a histocompatibility test in laboratories using donor and recipient blood to verify that there is tissue compatibility,” adds the doctor. In addition, the size of the viscus to be removed must be similar to that of the one that is going to replace it.

However, the need to increase the number of donors is another aspect that worries doctors, since the percentage of people who die waiting for a lung ranges between 20% and 25%. “It is essential to launch projects such as the one that was activated in Spain since 2001 and which also obtains lungs from people who have died as a result of cardiac arrest outside hospitals,” the surgeon emphasizes.

Regarding future challenges, it should be noted that one of the goals set by the King Faisal Specialist Hospital & Research Center is to extrapolate robotic surgery to lung transplants, in order to avoid major surgeries. “We want to launch a pilot project in which we can demonstrate that the use of the Da Vinci robot in transplant surgery is feasible and that it can even facilitate the performance of the practice,” he emphasizes.

The King Faisal Specialist Hospital & Research Center is the reference healthcare center in Arab countries and the only one that performs lung transplants in the Middle East. Dr. Norberto Santana has already spent four years in the aforementioned hospital. However, he has also worked in New York and at the Doctor Negrín University Hospital of Gran Canaria. “Here, a very important dynamic has been created in organ transplantation and we also have very powerful research teams,” the doctor values. | YM