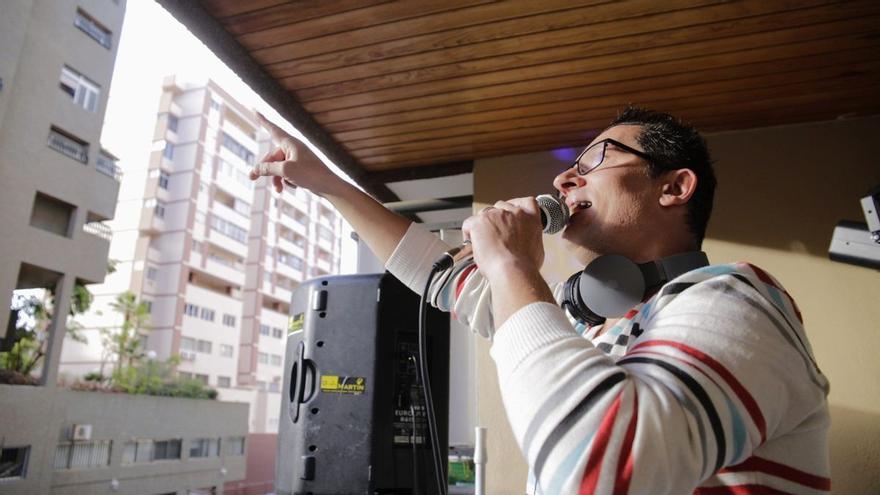 An entrepreneur from Santa Cruz of Tenerife has paid the two fines filed, by the Local Chicharrera Police, to the known as Dj del Balcon, Luis Martín. This is Jorge Quintero, owner of the entity Terrenosynaves.com, who says that he has paid the sanctions because he believes that “an injustice was being committed against this citizen, because he had not done anything wrong, but quite the opposite.”

During the confinement caused by the Covid 19 pandemic, the so-called DJ on the balcony dedicated himself to entertaining the Saturday afternoons of numerous neighbors in Tomé Cano, in the capital, playing music from the balcony of his house. But he only did it for three Saturdays, because the Local Police of Sana Cruz, after a call from some neighbors, went to his house and fined him. Martín received the notifications of these sanctions, as announced by ELDÍA, last Friday, one year and four months after the agents drew up the minutes. They were two fines, of 601 euros each, directed to the own DJ of the balcony and the son of his partner.

Martín told ELDÍA in an interview, published on Wednesday, that now he could not face the payment of these sanctions, which in total amounted to 1,202 euros, because “I am unemployed.” He reported that he had requested help from citizens through the Gofundme platform, in order to collect the money necessary to pay them as soon as possible, since this amount would be reduced by half, that is, to 601 euros, if the payment was made within 15 business days from the day after receiving the fines.

The DJ on the balcony explained that one Saturday during confinement, “after seeing a neighbor crying alone at home,” he decided to “brighten the life a little” of those around him through music. To do this, he said, “I requested authorization from the communities of owners.”. «The music was put on from 6:00 p.m. to 8:00 p.m., stopping at 7:00 p.m. to applaud all those professionals who were putting their lives at risk to save the rest of us. The third Saturday that I did it, we stayed a little longer because the neighbors asked me to. I told them we were leaving after three more songs. But the police knocked on my door, as if they were going to tear it down. They took me out of my house in very bad ways. They treated me like a criminal. I stopped the music and that’s where my initiative ended. The notifications indicate that I resisted the authority, that I was on public roads, and that I ignored what they asked of me. But that was not the case, I assure you. The problem is that I know that it is my word against that of the Local Police », explained Martín.

The day after the story of the DJ on the balcony was published, businessman Jorge Quintero contacted this newspaper to try to locate Martín. Quintero, surprised at what was narrated by the well-known DJ on the balcony, has decided to pay the fines. «It seems that we have forgotten that the only thing this man was trying to do is give a little happiness and joy to the sad situation we were suffering, because we were locked up. It is an exaggeration to fine him 1,200 euros, with a salary, for entertaining only a few hours of confinement. I don’t think there is an equal case in all of Spain, as there were many DJs on the balcony, like Luis Martín, and I doubt they have been sanctioned. I just want to help him because he helped us at that time ”, explains the businessman.

Martín still has a hard time believing what has happened. He assures that he will be eternally grateful to “this wonderful person”. «At last tonight I will be able to get some sleep, because I have not done it for several days. I want to thank everyone who has helped me and, especially, this generous businessman, “he said. Regarding what had been collected so far, just over 100 euros, Martín indicates that he has given it to a mother and her daughter who “are having a very bad time.”