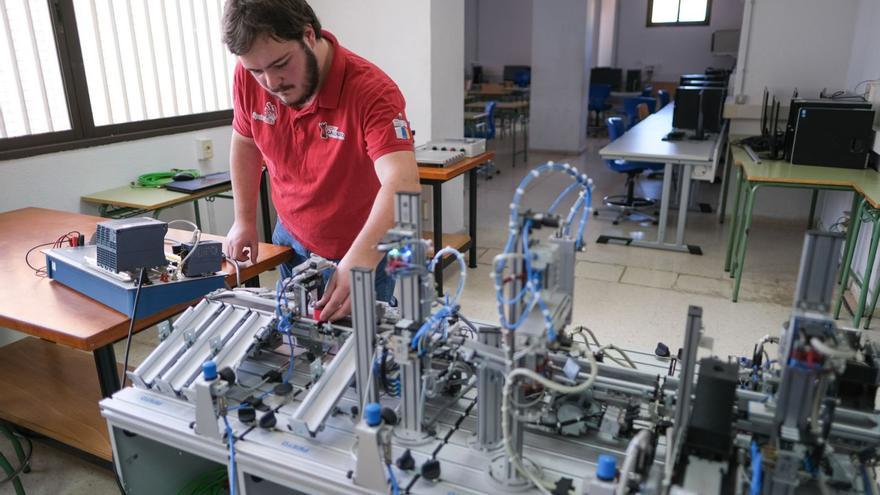 With humility and hard work you can get very high. Daniel Pérez Gómez knows this well, at 21 years of age, he has a backpack full of successful experiences behind him, demonstrating that in the Canary Islands things can be done well as long as the complexes are shaken and the goal is clear: to learn. This young student of Electronic, Industrial and Automatic Engineering at the ULPGC has managed to hang the bronze medal in the international WorldSkills contest, which rewards the best in the world in different disciplines of Vocational Training. He achieved third place representing Spain in the Mechatronics branch, only behind Switzerland and Taiwan. Quite an achievement with which he seeks to establish a chair and show that everything is possible, also for the islanders.

Sitting in the armchair, he looks around nervously and moves his hands to gain confidence, but when he speaks, his explanations are clear and it shows that he is clear about what he wants to convey. “Especially in the national phase, we went with that inferiority complex of not being able to be better than people from the Peninsula, which is not something we say or think, but rather it is in the subconscious,” Tony recalls from the classroom of the IES Gallardo, in La Isleta, where he began his FP studies in a medium cycle of Electromechanical Maintenance. However, that negative thought was soon blown up. On the first day, he and his partner Jorge were the best. Reach out and kiss the saint. Then the other two days were maintained to finish second, only surpassed by Castilla y León: “It is very nice to arrive, stand there and say that we are also very good,” he acknowledges.

And something similar happened to him when he was selected to represent Spain in the international branch of the contest. After achieving second place, the Ministry of Education proposed to the couple from Castilla y León to go to WorldSkills, but one of them refused to go, so they asked Daniel and Jorge if they would cheer up. As the second was working, Daniel had to take on the challenge accompanying the Castilian-Leonese. But a month and a half before the test, which was held online due to the pandemic when it was actually going to take place physically in Shanghai, this colleague withdrew and left the responsibility on the shoulders of the canary, who did not hesitate for a second. “You have to do things twice as fast, that’s the problem, but I was lucky that it went well,” he explains. And so much so that he did well, since he only managed to face 24 couples from all over the world and won a bronze that tastes like gold. Above all because, like the Canaries in national competitions, Spaniards worldwide also have their complexes.

However, Pérez takes El Hierro away from the matter: «If we are good technicians, if the education is good, we can reach the highest level in the world, compete face to face with anyone in the world, and in the end in the World Cup I beat people from Korea , China, Japan, so big on an industrial level.

His mission to win this international recognition was by no means simple. When he went online, he had to face a kind of theoretical-practical exam that consisted of two tests. In the first one, he had to fix the problems of a simulated electromechanical circuit that did not work, and then answer a test of questions related to this problem. The second, for its part, consisted of programming a simulated station, a small industrial process, and linking it to the computer, then answering another questionnaire.

In the opinion of the young man, a native of Teror, the importance of these competitions resides in that they help to make visible “the role that Vocational Training plays” in society. “In the end, the knowledge you acquire at the University is just as valid as the one you acquire at VET, each one aimed at a specific aspect,” he adds. And it is that more and more walls are being demolished around this mode of study and it is given greater value among administrations. Long before, it was the companies themselves that demanded this type of education in which skills were acquired in a faster, more practical way and in constant dialogue with what each of the sectors required. Nowadays, far from being the maligned path followed by those who were not suitable for studying, VET has become the preferred option for many people.

Daniel Pérez is clear that those who are not very clear about doing a career have to be encouraged and “put the option on the table of doing a FP, because you learn a lot, things that you like and you learn directly with your hands.” To reinforce his idea, he gives a crystalline example: Austria has promoted university education for decades, so it has an abundance of engineers, but lacks technicians, so it ends up importing young people trained in other European countries so that they can work in factories, where the knowledge of university students does not have so much place.

In addition to this world bronze, this young man has also achieved another great achievement in his young age. With the IES de Guía, where he studied a higher degree in Automation and Industrial Robotics, he participated in another national contest, the Siemens Prototypes. In it, his team came in second place after assembling a model that had to promote digitization and originality to solve a daily problem. According to him, in this contest the Canary Islands had not played a good role for more than 15 years.

And what is the future that awaits this engineering talent? With that simplicity that he boasts, but with the determination that has made him prevail in so many competitions, he wants to dedicate his life to helping others through research and development of prototypes that benefit society as a whole and “give back to them of what my education has given me. Nor does he rule out continuing to work for the industry with a company of German origin with which he has done internships two summers in a row. In the end, either one or the other, or if he fulfills his dream of working for the European Space Agency, Daniel will contribute to making the world a better place.

An ‘in crescendo’ option

Vocational Training is no longer the ugly bonus that nobody wants to take. More and more people are opting for this option of education and the administrations are betting in their budgets and training programs for it. According to Daniel Pérez, since he began to study his middle cycle at the Tony Gallardo IES in the capital of Gran Canaria, there has been a constant increase in the items for VET, which have reached the classroom in the form of more tools and methods more complete learning methods for students. «It needs innovation every year, it takes investment, that the Ministry speak with each institute, and perhaps it is necessary to train teachers with a vocation, which is also very important, and that I was fortunate that almost all my teachers had that vocation that they managed to transmit to us », highlights the young man. Only in this way will it be possible to reach the level at which other Spanish regions are found, such as Castilla y León, which has been firmly committed for years, “and that is why they are so good.” In fact, he gives as an example, “they are like China in the Olympics, they take all the metals.” The Islands can also be an example in many branches of work that have a special imprint in the region, as has already happened with some university degrees. Everything is to get to it with determination and enthusiasm. | CAS